Islamists demand closure of US Airbase in Ramstein, according to the letter found at the blast site 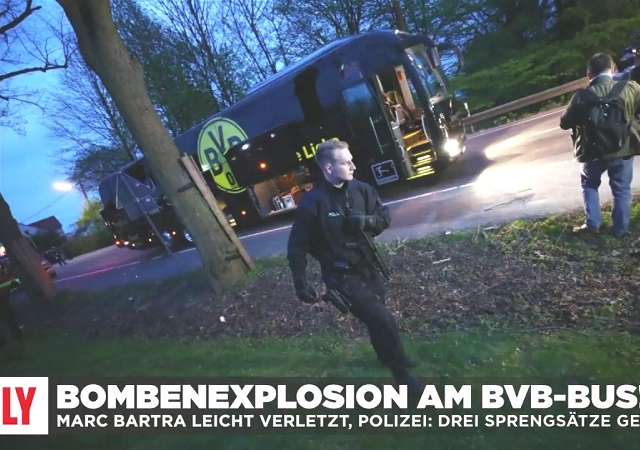 The probe into Tuesday’s triple bomb blasts in the city of Dortmund has led the German police to the refugee circles. Investigators detained a known Islamist holding a German passport and an asylum seeker from Iraq on suspicions of carrying out coordinated bomb attacks on the Borussia Dortmund soccer team bus, injuring one player.

Three explosive devices went off near the soccer team’s bus as it left the hotel for to the Champions League quarterfinals against AS Monaco. German authorities are treating the incident as a terrorist attack.

German Police recovered a note near the site of explosions that began with “the name of Allah, the merciful,” German newspapers Süddeutsche Zeitung reported. The note further calls for Germany to close the Ramstein airbase that serves as the headquarters for the U.S. Air Force in Europe:

One of the documents [found at the site] refers to the Berlin Christmas market attack and said German Tornado fighter jets were involved in bombing the Caliphate of the Islamic State. This [terror] would persist until Germany pulls out Tornado jets [out of NATO forward bases close to Syria] and shuts down the U.S. airbase in Ramstein, Rhineland-Palatinate. [Author’s translation, Süddeutsche Zeitung, April 13, 2017]

German Chancellor Angela Merkel called the terrorist attack a “despicable act.” However, if the evidence in Tuesday’s bombing again leads the investigators to ‘refugees’, German Chancellor will have some explaining to do for her open borders ‘refugee’ policy ahead of the September general elections.

To maintain the false pretence of normalcy, soccer authorities forced the Borussia Dortmund team to go ahead with its sporting schedule. “We were treated as if a beer can had hit our bus” team’s trainer Thomas Tuchel said. Another player told reporters that in the aftermath of the terrorist attack the players were “treated like animals.”

With just days to go for the first round of Frence’s presidential election and five months until the German Bundestag elections, European establishment is trying its best to keep public attention away from the fall-outs of the ‘Refugees Welcome’ policy.

Interior Minister for the state of North Rhine-Westphalia, where Dortmund it located, Ralf Jäger, told public to “give police some time” and not to jump to their own conclusions.

However, lack of public trust in Minister Jäger’s investigative abilities is well founded. As state’s Interior Minister, Jäger oversaw the police inquiry into the last year’s mass-sexual assaults at Cologne central station. Despite 1,200 female victims of robbery, assault and rape; almost all of the attackers have walked free. Earlier this year, Jäger himself admitted that “most of the cases will remain unsolved.”

Testimonies of hundreds of victims, countless eye witness accounts, and surveillance footage have been of little avail — raising questions whether government authorities were actively shielding the ‘refugee’ culprits.

German has been hit by a series of Islamist terror attacks since German Chancellor Angela Merkel disbanded the E.U.-wide border restrictions, or Dublin Protocol, taking in over a million migrants and opening Europe to further waves of mass-migration from Arab and Muslim countries.

These were 3 roadside IEDs used in Germany.

So they want us out of Germany.
No, the Germans are going to need us there when they wake up and have to start civil war to eject the muslims.

Close Ramstein? That is never going to happen.

Mutter Merkel is an unrepentant East German socialist bureaucrat who is fully deluded with this open border one world horse crap.

Germany is currently the economic big boy on the continent and pretty much dicates to the EU in Brussels how things will be in Europe. Mutter Merkel enjoys that continetal power – even if more than a few Germans are raped or murdered by Islamists. The state needs an infusion of workers, comrade.

It’s why the UK wisely said “Buh-bye” to the EU with Brexit.

Yet, even if Merkel is ousted in September, I don’t think much will change. Gemany’s EU power position is the ‘precious’ of Europe and far too enticing to give up by whichever politician takes over for Merkel.

You must be crazy. It was the Baptists trying to stop beer drinking and dancing. Surely a poor muslim refugee wouldn’t do something like that. Explosives are dangerous and where would a poor refugee get training? It was definitely the Baptists from a southern state.