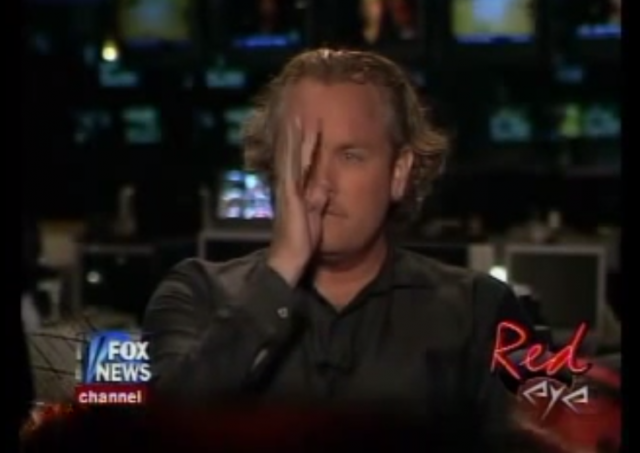 Monday, it was announced that the best show on Fox News was getting axed. After a ten-year run, Red Eye will be no more. Not because the show wasn’t popular, but because the network wants more live news. At 3 AM.

From Matt Welch at Reason:

On Monday afternoon, without any real prior warning, the on-air talent and behind-the-scenes weirdos of Red Eye, the past decade’s most oddly compelling cable news program, were told by Fox management that their show would be euthanized this Friday. Thus ends not just the most voluminously friendly venue for Reason staffers over that time period (including at 3 a.m. ET tonight, when I will be on), but also the terra firma in a broadcast micro-climate friendly to those many of us who can’t fit neatly into the square (or round) pegs of political media. It’s a sad day, y’all.

salute to @RedEyeFNC fans who inspired us to do some seriously messed up shit. it was & will remain the strangest show ever to appear on tv.

The show was co-founded and anchored by Greg Gutfeld, a sort of impish hell-spawn of Andrew Breitbart and Johnny Rotten, back in 2007 (watch Reason TV’s 2012 interview with Gutfeld here). With co-conspirators Bill Andrew Schulz (*see bottom of post), a spittle-flecked degenerate metrosexual, and Andy Levy, a semi-taciturn libertarian Army vet, the show was both a lifeline for political insomniacs and a Dadaist laboratory for defacing the boundaries of cable news. Examples of such abound in the Twitter timeline of Gutfeld, who continues to co-anchor daily on The Five as well as hosting his own weekly Fox News Channel show. As Nick Gillespie wrote upon the introduction of the latter:

For my money, Greg Gutfeld is the most consistently funny and insightful conservative/libertarian critic of the news media and broadly defined culture industry. Certainly, he is the only person on the planet who admires equally both former Rep. Allen West (R-Fla.) and post-punk standouts The Melvins (indeed, band founder Buzz Osbourne is a regular guest on various Gutfeld shows).

At his best (which is to say, basically every day he shows up for work), Gutfeld casts a hugely wide net of references and knowledge about politics and culture and, most important, is absolutely honest about where he’s coming from and why.

To be honest, I wish he were more consistently libertarian but what are you gonna do, really?

Amen. (And I hate Reason magazine and its spawn.)

Never heard of it. Sounds like a corporate response to Camille Paglia. Glad I missed it, actually.

It was finally finding its legs under Tom Shillue. They could have held off the live news for an hour.

It was my favorite show on Fox. Entertaining. The people and personalities that moved through were always fun.

Good show. I will miss it. I guess it didn’t bring in enough money. They will probably fill the hour with news reruns. Much cheaper.