Book: Obama Pushed Hillary to Concede as she Apologized to Him for Election Loss

Book: Obama Pushed Hillary to Concede as she Apologized to Him for Election Loss 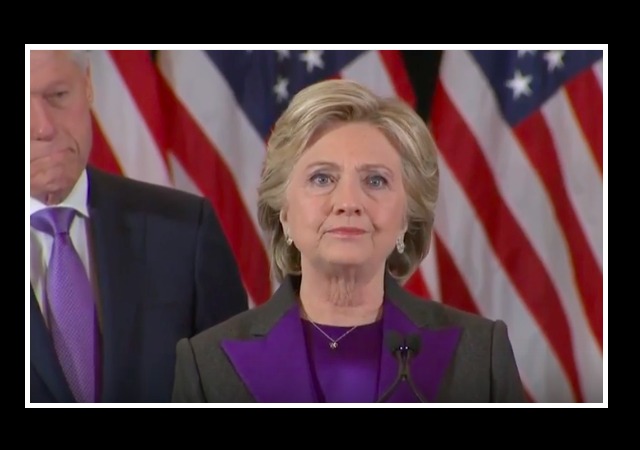 The book Shattered: Inside Hillary Clinton’s Doomed Campaign has revealed candid details about Hillary Clinton’s campaign the months leading up to election night and how she dealt with the massive loss to President Donald Trump.

Poll after poll showed Hillary with the lead, which rightly had everyone thinking she would win on November 8. But something happened. The quiet Trump supporters came out of the woodwork and handed her a devastating loss.

Authors Jonathan Allen and Amie Parnes wrote that the defeat forced Hillary to do two things she never thought would happen: Congratulate Trump and apologize to former President Barack Obama.

All through election night, Hillary and her aides remained convinced she would win the presidency. But when top vote counter Steve Schale alerted the campaign that she would not win Florida, the defeat became obvious.

But when Fox News called Wisconsin for Trump, reality set in for many in the campaign and the White House. The Washington Post reported:

But Clinton was dragging it out.

So then she got a call from POTUS. “You need to concede,” urged Obama, who repeated the message in a follow-up call to Clinton’s campaign chairman, John Podesta.

At last, Clinton said, “Give me the phone.” And then the first woman who was going to be president got her opponent on the line and said two words she never expected to say: “Congratulations, Donald.”

Yes, it’s that simple. Hillary and her aides can scream sexism and blame FBI director James Comey all they want, but Allen and Parnes narrowed down the loss to the quality of the candidate. From The Daily Beast:

Based on interviews with more than 100 unnamed sources from within Clinton’s orbit—each account given under the condition that the tales would be told only after the final ballot was counted—the 480-page report relays the behind-the-scenes drama behind many of the Clinton campaign’s most embarrassing blunders and unforced errors. More damning than any anecdote of petty infighting or a deadly devotion to data, however, is the book’s verdict on the main reason for Clinton’s loss: Clinton herself.

For example, Hillary’s use of a private email server when she served as secretary of state was more problematic than the campaign recognized. The campaign wanted to treat it as no big deal. As she kept denying she did anything wrong with the server, like sending and receiving classified information, facts kept proving her wrong.

Allen and Parnes frame this and similar stories of Clinton’s insistence on trying “every approach but confession and contrition” as indicative of a Clintonian truth, universally acknowledged: that she is “a terrible judge of how her actions could backfire and turn into full-blown scandals.”

The denialism ran in the family, Allen and Parnes report, particularly with Clinton’s husband, former President Bill Clinton, who delivered what one aide called “an ass-chewing” tirade on a conference call with senior campaign staff about their supposed failure to articulate the campaign’s message and bury the email scandal.

“Neither Clinton could accept the simple fact that Hillary had hamstrung her own campaign,” Allen and Parnes write.

Hillary doomed her campaign because she favored “loyalty over competence.” One speechwriting source told Allen and Parnes that this action made the campaign a popularity contest and compared it to junior high school. This also caused the campaign to struggle “with recognizing an existential crisis in the candidate’s standing with working-class whites.”

This is an area that her husband Bill excelled in. However, Allen and Parnes discovered that the campaign largely kept him quiet during this run. From The Daily Beast:

The former president, a preternatural reader of crowds since his early days as a Democratic political wunderkind, saw in the Democratic and general electorate a resentfulness among the blue-collar whites that the rest of his wife’s team didn’t. A dyed-in-the-wool member of the white working-class, Bill saw the constituency’s frustration with being “left behind” in the economic recovery as an opportunity for the populists—and a problem for his wife that needed to be addressed head-on.

But Mook decided the campaign should focus on the “turnout among minority constituencies,” which caused Hillary to lose the Michigan primary and the election:

“Michigan really baked in this idea that we had pushed him to spend time in the African American communities when he should have been out pursuing white people,” one aide said of Bill Clinton, according to the book. (As a result of the Michigan cataclysm, due in large part to faulty data showing Sanders behind, Mook would eventually be “layered,” a nicer way of saying that he was demoted while never losing the title of campaign manager, Allen and Parnes write.)

It is much simpler than all this. It all comes down to an ancient saying among my people. “You needn’t a proctoligist to recognize an asshole”.

The feel-good story of the year!

I can’t help wondering if she was getting spy info on Trump’s internal polls, and trump knew this and fed her false data.

A conspiracy theory, but it doesn’t seem outrageous. Trump was making jokes in 2013 about Obama spying on him. And Hillary seemed to think she had the rust belt sewed up.

notamemberofanyorganizedpolicital in reply to Petrushka. | April 19, 2017 at 4:34 pm

She has proven twice she is a horrible candidate. Lying about her health, the server, and calling half the country deplorable and irredeemable were all unforced errors that she alone is responsible for.

Despite that, she had endorsements from everybody in Hollywood, virtually every corporate CEO who explicitly endorsed a candidate, and almost all the newspaper editorial boards except two (that I’m aware of). She and aligned groups raised $1.3B compared to Trump’s $750M. She almost had to try to lose with those advantages.

People say, she won the popular vote! Well, she had almost twice as much money as Trump. Duh. And it’s been reported that the HRC campaign was so convinced they were going to win the electoral college vote but possibly lose the popular vote, so they campaigned in places she was certain to win to goose the popular vote tally. Who does that? That’s like knowing the rules of the game but deciding to play by different rules that disadvantage you. Just stupid. Terrible candidate and a terribly run campaign.

Yes, she deserves most of the blame. But the blame should be shared by people like Podesta and especially Mook who gave her terrible advise and guidance. I don’t know if that comes out in the book but it should.

There is no penalty for failure in DC. They’ll all write books about their failures, and/or get in line to fleece donors for the next campaign.

Yep, and by a considerable margin: ~3 million votes. But then she lost the electoral vote by 77 votes. It wasn’t even close!

That’s like knowing the rules of the game but deciding to play by different rules that disadvantage you. Just stupid.

Right. I made the analogy a while back: it’s like going to a championship basketball tournament with a team that can dribble and pass and run the ball like nobody else, but can’t sink baskets to save their lives. So in practice leading up to the game, they continue to work on ball-handling because that’s what they’re good at. “Control the ball, control the game,” they think. “Screw scoring; that just gives possession of the ball to the other team!”

And then they’re shocked — shocked!! — when the other team wipes the floor with them in a boring, low-scoring game by quickly and consistently sinking three-pointers the few times they can get the ball on an unforced error.

HRC’s strategy was technically correct; she was playing to her strengths. But she was also playing with an incomplete skill set and made no attempt to make up for her shortcomings. DJT also started with an incomplete skill set, but was able to bring in competent people to round it out, and had the advantage of being able to publicly and repeatedly nail her where she was weakest: herself.

notamemberofanyorganizedpolicital in reply to MaggotAtBroadAndWall. | April 19, 2017 at 4:35 pm

Hillary DID NOT WIN the popular vote.

Dead people’s and illegal terrorists’ votes are not legitimate.

That book has got to be bogus at any price. Hillary Clinton is completely without conscience and has spent her entire adult life mouthing whatever words were necessary at any given moment in whatever accent the geography required. If she’s breathing, she’s lying.

Probably trying to get some sympathy before her indictment.
(I know…wishful thinking….but it is worth the 10 seconds of imagining Justice Served.)

I can’t wait until HBO makes a movie about the election night. You just know they will…

Meh…I can see that drama play-out in any random Applebee’s every Friday night: Some old dame, all slathered with make-up and wearing a frumpy pantsuit, is slumped-over in a corner booth, drunk off her a$$, wailing about some long lost love…about how she deserved it, about how it was hers and hers alone…until some vapid whore came along and stole it from her.

notamemberofanyorganizedpolicital in reply to HamiltonNJ. | April 19, 2017 at 4:37 pm

Say what you want about Bill, but he’s a savvy politician. Hillary’s campaign had access to one of the best Democrat (yes, Joy, I just wrote “Democrat”) strategists in the business (for free) and decided to largely ignore him.

Obama: You need to sober up and concede.

Hillary: You sorry sunofabitch…It’s all YOUR fault!

But she didn’t concede conceded.

And what DaveGinOly said.

She was just sorry that Obama didn’t give her a pardon on his way out the door.

Though interesting tell-all, remember that in the era of “Fraudulent News”….watch for the spin. Watch for “The Spin”.

If anyone believes that this ghoul was anything other than an unhinged maniac after PA was called for Trump, I have a bridge to sell them.

I can totally believe that Hillary had to kiss the ring after she lost. But, I’m pleasantly surprised at news that, after 8 years of encouraging street fighting, Obama did something positive for the country and told her to concede. Hillary’s die hards, especially on the West Coast, would have continued to fight for her.