However, Los Angeles and Bakersfield pollution levels actually have plummeted during past two decades. 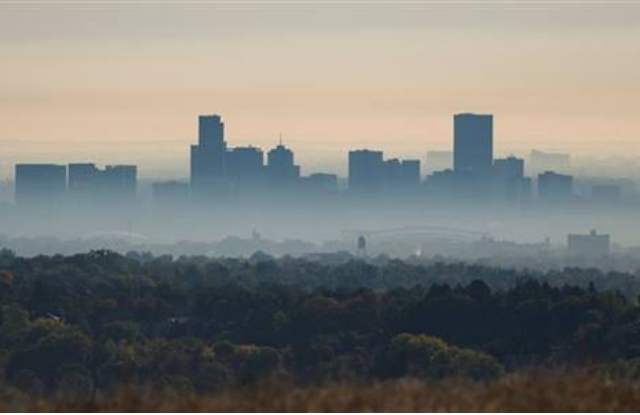 Despite all of this business-crushing environmental protection, the Golden State is covered in shame and smog. It turns out six of the ten most polluted American cities are in California!

California’s smoggy reputation appears to be deserved: Six of the USA’s 10 cities with the worst air pollution are in the Golden State, according to a new report.

Bakersfield, Calif., again holds the dubious distinction of having the USA’s most days of highly polluted air, based on data from 2013-2015, the American Lung Association’s annual “State of the Air” report released Wednesday found. 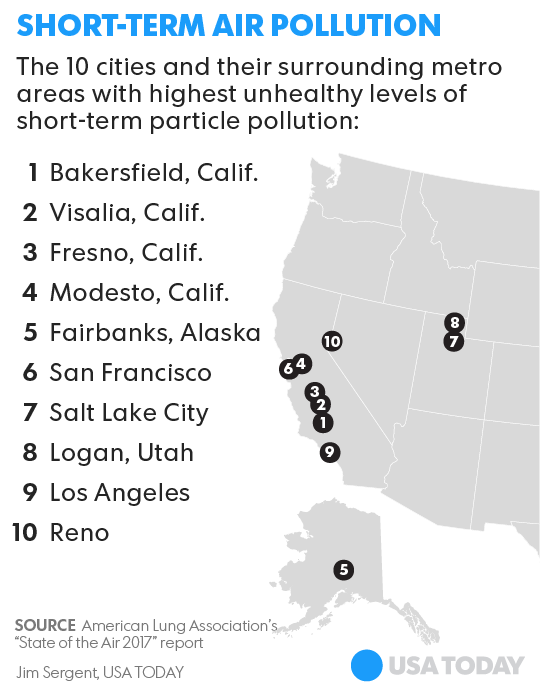 But is the news as dire as is being presented, especially since reports like this will inspire even more unreasonable regulatory inanity?

The first point to address is that Californian geography lends itself to conditions that are favorable to smog formation. For example, the combination of the Los Angeles basin, the limited number of mountain passes that are conducive to air flow, and Pacific Inversion causing cooler air to seal in warm, contaminate-containing atmosphere cannot be changed…short of a MOAB.

The most polluted city, Bakersfield, lies near the southern “horseshoe” end of the San Joaquin Valley, with the southern tip of the Sierra Nevada just to the east. The combination of location, desert conditions, oil production, farming, and other economically necessary activities contributes to the air contaminants.

Another aspect to consider is the data itself. While it is interesting to compare California to the rest of the nation, the more valuable comparison is analyzing the pollution data from the state’s past. There is a lot of sunshine in those statistics!

For example, 20-year study focused on Los Angles finds that millennial children breathe easier than youngsters who came of age in the ’90s because or reduced pollutant levels.

…Combined exposure to two harmful pollutants, nitrogen dioxide (NO2) and particulate matter of diameter under 2.5 microns (PM2.5) fell approximately 40 percent for the third cohort of 2007-11 compared to the first cohort of 1994-98. The study followed children from Long Beach, Mira Loma, Riverside, San Dimas and Upland.

Children’s lungs grew faster as air quality improved. Lung growth from age 11 to 15 was more than 10 percent greater for children breathing the lower levels of NO2 from 2007 to 2011 compared to those breathing higher levels from 1994-98.

There has also been a substantial reduction of pollutants in Bakersfield as well.

…But the authority tasked with addressing the region’s air quality issues, the San Joaquin Valley Air Pollution Control District, does not seem too concerned, suggesting it has done just about all it can to alleviate the problem.

“Over the last 25 years, air pollution in the San Joaquin Valley – from the stationary sources we regulate – has been reduced by over 80% with some of the toughest air regulations in place anywhere in the nation,” says Seyed Sadredin, the air district’s executive director.

The final point to make, and one which I hope our bureaucrats weigh seriously, is that there is not need for excessive, new regulations since the current ones are working. There has been an exodus from California, which was once a dream-destination for Americans. Another six-in-ten number makes this point:

An analysis of Census Bureau data by the Sacramento Bee shows that between 2005 and 2015 800,000 working-class Californians on net left for other states. Twenty percent of this net working-class outflow — 156,000 — went to one state in particular: Texas. Meanwhile, new data from the Census Bureau show that six of the 10 fastest-growing counties in the United States are in Texas or Utah; none are in California.

California – Come for the smog, stay for the asthma.

the bed wetters whining about all this are the same criminal scum who approve every proposed building project, because they need MOAR property tax revenue to pay for free 5hit for the illegals & other scum.

Some places around the world are geographically predestined to be pollution hot spots. Here is one example of many regarding California:

Why Did a 1542 Spanish Voyage Refer to San Pedro Bay as the ‘Bay of the Smoke’?
https://www.kcet.org/lost-la/why-did-a-1542-spanish-voyage-refer-to-san-pedro-bay-as-the-bay-of-the-smoke

Some good news from this long-time California resident who hates the place:
We returned today from an I-5 trip and can report a stunning burst of new fruit trees, nut trees, corn, and vineyards along much of the central valley. Huge tracts are growing where there was only devastation and dead trees the last few years, and additional huge tracts are in various stages of preparation for planting and with brand new planting. It is truly a beautiful sight.
It is difficult to imagine how much food California could produce if the government would butt out.

Well, this is indeed good news. My last total I-5 trip was in 2009, and I nearly cried over the uprooted orchards and bleak landscape.

I usually head down US 99 from Sacramento, which I find much more varied and interesting, even if the driving is a bit more of a challenge.

A few years ago I was at the “new” Getty museum and happened to be visiting with a fellow from Bakersfield. He said that the south end of the San Joaquin Valley produces not all that much of the pollution it gets blamed for. It all blows down from the north, namely San Francisco/Oakland and environs, and gets trapped it the bottom of the bowl.

Salt Lake City was bad enough when I lived there in the mid-late 1960s. It can have legendary inversions in the winter. You don’t want to be there when that happens.

Liberals in California have been crying “pollution” and “drought” for 40+ years. Yet since then, they’ve doubled the population and destroyed countless acres.

Liberalism is Projection, among other evils.

when was this study done?? if it was for the ‘winter months’ what would expect, me the report as it is, maybe they should do it after the summer is over.

A few weeks ago I read some favorable water policies that have come about during this short recent California drought which could possibly mean that adults are taking the reins in California water management. I wouldn’t bet on it though.