Women Flock to Have Mitch McConnell Quote Tattooed on Their Bodies

Women Flock to Have Mitch McConnell Quote Tattooed on Their Bodies 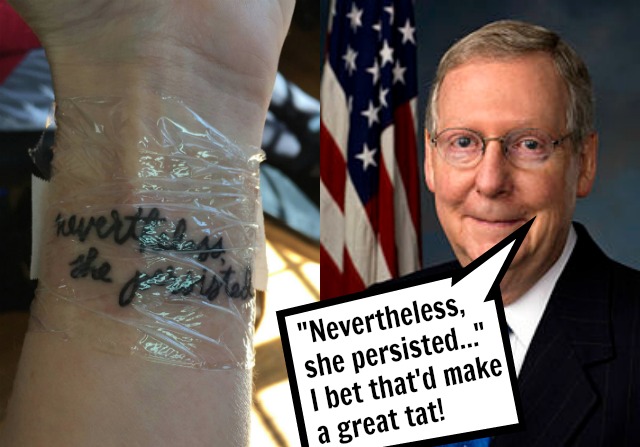 “Can I get the McConnell special, please?”

Almost exactly a month ago, Sen. Elizabeth Warren violated Senate floor rules when she attempted to read a letter from the late Coretta Scott King that would’ve impugned then Sen. Jeff Sessions.

Warren refused to stop reading and eventually read the letter in full outside of the chamber. Describing the event, Senate Majority Leader Mitch McConnell said, “nevertheless, she persisted.”

Now, women everywhere are flocking to have this pithy little McConnell quote inked on their bodies for all eternity.

Tattoo parlors across the country are capitalizing on this now en vogue neo-feminist mantra and are holding special events for women seeking a “nevertheless, she persisted” tat of their own. See here, here, and here.

And the idea is only picking up steam:

I want to tattoo the quote "Nevertheless, she persisted"

When your friend gets a "Nevertheless, she persisted" tattoo on #InternationalWomensDay ????

How we make an impact: #DayWithoutAWoman , "Nevertheless, she persisted" #tattoo on International Women's Day?: https://t.co/7dKvcGFRDh pic.twitter.com/V7O6uEwwHY

I'm over the bloody moon that 'Nevertheless She Persisted' has become a trend in tattoo parlours. A Women's Day Joy.

Carolyn said she's experienced sexism her whole life. Yesterday she got a tattoo that reads "nevertheless, she persisted" pic.twitter.com/8IWhX36j26

@HillaryClinton Would u write "nevertheless, she persisted" & send a pic? My sister & I want to tattoo it as a reminder there is always hope

Though I doubt many if any have any clue who said this.

Her tattoo artist warned her this was a terrible idea. Nevertheless, she persisted. https://t.co/JdUR79eodt

Once again these dumb broads prove their ignorance, poor judgment and trashiness.

Yep, remember when it was all the rage for females to have tramp-stamps tatoo’d on their lower backs? People can be pretty f-in stupid, and trashy indeed.

This will last longer than wet pants. LOL!

Change that to he, and you describe a stalker.

How about, “The Dude Abides”?

The tattoos are stupid. However, “nevertheless, she persisted” is exploitable and McConnell ought to have phrased it better.

I’d just like to emphasize the hypocrisy of the Democrats.

In California, a female GOP state Senator, who is from a family of Vietnamese refugees, was silenced similarly when she tried to speak out against a motion celebrating former state Senator, and infamous Chicago 7 member, Tom “Commie Tommy” Hayden (AKA, the former Mr. Jane Fonda).

She was driving and her check engine light came on.

Nevertheless, she persisted…and now she needs a new car.

Hahaha. This is way more accurate than I care to admit. Just ask my last car.

If this helps Warren to become the face on the dim party, then I’m all for it… let it be the fake-indian who speaks for the dims.

She persisted so McConnel made her shut up and sit down. If Iwere a woman my slogan would be different than that.

And she remains alone.

This is great news! The world would be a lot easier to navigate if all Warren supporters got identifying tattoos.