The kidnapper remains on the loose. 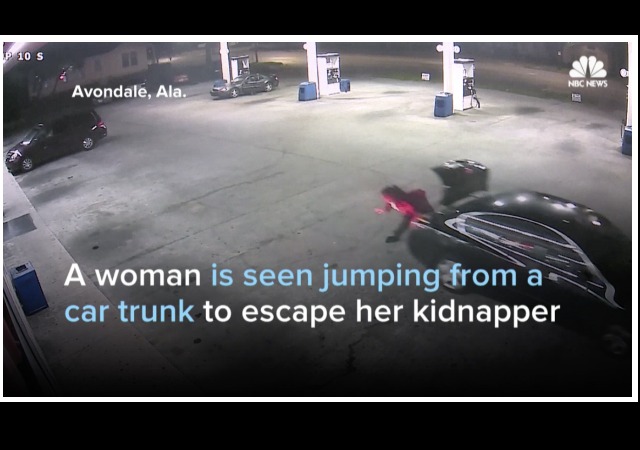 A woman kidnapped at gunpoint made a dramatic escape from the car’s trunk, which a camera at a gas station caught on camera:

Police said the 25-year-old victim was abducted from outside her apartment in the Avondale neighborhood of Birmingham, Alabama.

Her dash for freedom was captured on a surveillance camera around six miles from where she had been kidnapped.

Sgt. Bryan Shelton said the victim was forced into the vehicle’s trunk after telling the assailant that she wasn’t carrying any cash.

“The victim stated the suspect drove to multiple unknown locations,” he added. “It is believed the suspect was using her card to get money.”

The Nissan Altima arrived at Yosef AlSabah’s gas station at about 11:40 p.m. on Tuesday.

AlSabah said he became suspicious when a man asked for help in withdrawing money from his store’s ATM machine.

He said the man got “mad” after being unable to get the ATM card to work and then watched as he returned to the car, and drove away.

The victim then ran inside and called 911. AlSabah locked the door after the woman said her kidnapper had a gun.

The man is still on the loose. If you recognize this man, please contact the Birmingham Police: