Is the beginning of the end of Obamacare nigh? 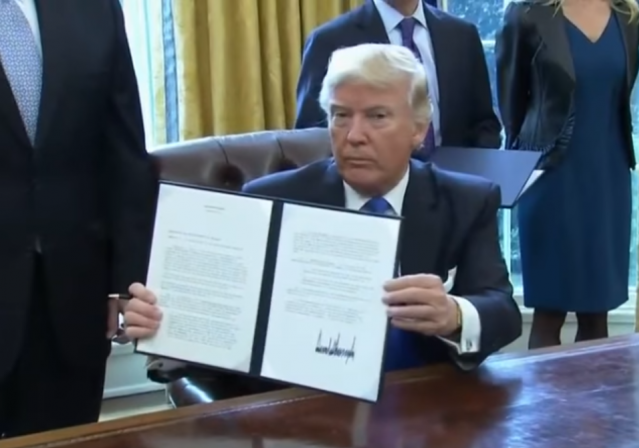 The American Health Care Act (AHCA) dubbed Ryancare, Trumpcare, GOPcare, and even RINOcare (take your pick), is the first step of three in repealing and replacing Obamacare, so we’re told.

This first bit of legislation can only address tenets of Obamcare that pertain to the budget (see also: reconciliation). Congressional Republicans have promised more substantive regulatory changes and reforms in bills to follow.

The House is slated to vote on the AHCA Thursday, but do Republicans have the votes?

As of Wednesday night, there were enough holdouts on the Republican side of the fence (thanks mainly to the House Freedom Caucus), to sink the bill:

A group of House Freedom Caucus members huddled with Vice President Mike Pence in a small room near the House chamber on Wednesday afternoon, while on the House floor, the GOP whip team worked the room. Later, Trump himself called Meadows.

“We had a great conversation with the vice president,” Mark Meadows, chairman of the conservative House Freedom Caucus, told the Washington Examiner after the meeting. “Certainly if anybody can get this to a yes it’s probably the president first and the vice president second.”

Earlier in the day, the Freedom Caucus announced that it had 25 members committed to voting “no” on the bill in its current form – which would be enough to sink the legislation.

Later in the day after more discussions with the White House, Meadows said that we are “not there yet but we are really optimistic.”

A White House official said, “We are open to changes to the bill that make it better and help grow support for it but no specific changes to discuss at this time.

Where do Republicans go and what do they do if the AHCA flops?

If Ryan’s health care bill gets voted down, or he has to pull it for lack of votes—it’s not the end of the world.

He can just revise it.

Last month, President Trump said repealing and replacing Obamacare could take as long as a year, which seems highly optimistic in Beltway Time.

I just emailed my Congressman – who happens to be Mark Meadows (AKA “The Honey Badger”) – and thanked him for holding fast on this abortion of a bill. What kind of fools do they take us for to think that if they just pass this flawed bill, they’ll fix the real problems later. Yeah sure. That will never happen. As Rep. Meadows and Ted Cruz wrote Three Criteria for Health Reform, the RINOcare bill will do nothing to bring down the cost of health care and nothing to bring down the cost of insurance. The only result of passing this bill will be shifting the blame from the Democrats to the Republicans.
.
I used to think that the RINOcare bill was the best they could do under “reconciliation”, but apparently that’s not the case. After all, the dems passed the entire mess under reconciliation in the first place.

snopercod: After all, the dems passed the entire mess under reconciliation in the first place.

That is incorrect. The basic structure of ObamaCare, the Affordable Care Act, was passed through normal order.

After the Senate overrode a filibuster and approved the Affordable Care Act, the House had wanted to renegotiate certain provisions, but in the interim the Democrats had lost their filibuster-proof majority in the Senate, so the House passed the existing bill as already approved by the Senate. President Obama signed the Affordable Care Act into law on March 23, 2010. To make the desired changes, Congress then passed related budget amendments through reconciliation, the Health Care and Education Reconciliation Act, signed into law on March 30, 2010.

That was excellent. I might add that last night Sen Mike Lee discussed reconciliation with the Senate parliamentarian and she seemed to indicate that the House could front load more regs in the first bill than Ryan had thought.

If so, that would drag it across the finish line.

correction….not add more regs but remove them. More of a straight repeal. Looks like they will get the votes now.

I can’t tell you how many times I heard people say Obamacare did not have the votes and would not pass.

In the end, nobody in either party has principles. To pass Obamacare, Democrats Bart Stupback sold out his anti-abortion principles; Ben Nelson negotiated the Cornhusker kickback; and Mary Landrieu did the Louisiana Purchase – even though they knew their constituents didn’t want Obamacare. They all lost their jobs, but Obama, Reid, and Pelosi made them sacrifice in order to create a huge class of people dependent on government for health insurance. It’s now a “right” and Republicans will only tinker around the edges as they always do after Democrats move the country left.

I predict Trump will force the Freedom Caucus to sell out their principles, too. The only question I have is if they’ll keep their jobs in ’18 after they sell out. Most are in deeply Republican districts so their voters are hyper-partisan Republicans. Maybe they’ll be primaried if Club for Growth or Freedomworks has a few bucks to throw around. But I doubt Democrats will pick up any of their seats.

I’d bet it passes the House tonight and everyone will put on a happy face and say it’s the first step in what they’ve all been fighting for for seven years.

I am one of those that has also wondered why the vote has to be now or never. What’s the big rush? Let the people know all of the details and listen to the experts tell us the pros and cons so we can make up our own minds. Why all the secrecy? Isn’t this how the Dems did it? Are we also going to have to pass it to see what is in it?

Personally, I don’t think whatever they do will lower my premiums that come straight from my pocket (bronze plan costing me 22 K annual including 7.2 K increase this year).

Most people are clueless about HC premium costs. I am actually rootin for Trump to win on this. If he can pull it off then there is a chance he can actually do something to change things right down the way. They have had how many years to do this right? Waiting to do something is the same as doing nothing.

I doubt it could be any worst then what it is today. I suspect that Pauls plan is better. Holding up tax reform over this is not worth stopping it. We are screwed no matter what passes, as I see it.

After that, we’re talking.

Our socialism is no better than their socialism. Repeal ObamaCare in its entirety or leave it alone. If we change it, we own it and then, even with 60 votes, we won’t be able to repeal it.

A turd remains a turd, even if you mix a few good things in it. Vote no on RyanCare.