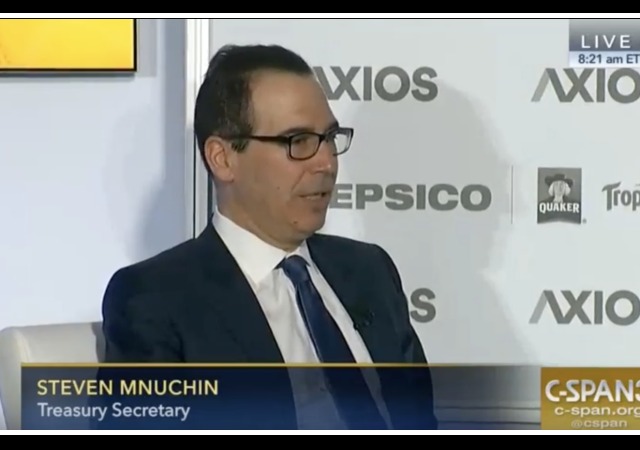 Now that the GOP healthcare bill is dead, the administration will more than likely set its eyes on tax reform. However, this could very well end like the healthcare bill.

House Speaker Paul Ryan (R-WI) insisted that the party has “more agreement” when it comes to tax reform while Treasury Secretary Steven Mnuchin explained that the “plan to overhaul the U.S. tax code would face smoother sailing” than healthcare.

Tax reform has been a subject for awhile as President Donald Trump meets with CEOs from businesses to discuss their needs to produce more and bring jobs back to the states. Despite all of this, the White House and Congress has latched onto a border adjustment tax.

Trump has pushed back against the tariff, but when asked how he’d make Mexico pay for the wall, Press Secretary Sean Spicer basically repeated the GOP’s border adjustment tax:

In remarks to reporters, press secretary Sean Spicer said a plan was “taking shape now” to institute a 20% tax on imports from countries with which the U.S. runs a trade deficit, “like Mexico.”

The House Republicans also tout this idea in its tax reform plan:

A border-adjusted tax would impose a levy on imports, including components used in manufacturing, and exempt exports altogether. Opposing it are retailers, car dealers, toy manufacturers, Koch Industries Inc., oil refiners and others that say it would drive up import costs and force them to raise prices.

Ryan or House Ways and Means Committee Chairman Kevin Brady have not released a tax bill yet so we do not have exact details on how they plan to make this work. But the plan might add this tax “to the U.S. corporate income tax, which is expected to drop to 20% from 35%”

The GOP expects this idea “to raise roughly $1 trillion over a decade, and could offset the cost of cutting corporate-tax rates.” Since the country “imports more than it exports” we now have a trade deficit. With this approach, the country will raise “money by effectively taxing the trade deficit.”

The tax also will supposedly remove “the incentive to book profits outside the U.S. or to put a country’s legal address outside the U.S. for tax purposes.” The Wall Street Journal reported that this move “could remove significant complexity from the tax system.”

Mnuchin’s Thoughts on the Tax and Tax Reform

As of now, Mnuchin has not taken a stand either against or for the tax:

He noted that there are aspects of the border-adjustment proposal that are similar to the value-added taxes that other countries have and that there’s a case to be made for the U.S. having a tax system that is more like those of other countries. But he said the administration is concerned that currency adjustments resulting from the tax could hurt exporters.

“It’s a very complicated issue. We’re looking at it carefully,” he said, adding that the White House isn’t looking at the proposal “as is.”

Mnuchin told an event that the administration “has been working on tax reform for the last two months” and they have not revealed anything because officials have been “designing it from scratch.”

Others have said that the healthcare defeat could hamper efforts to pass tax reform. Even Ryan said that passing healthcare reform would offer a smooth road for the tax reform. With defeat in the rear view mirror, Andy Laperrire at Cornerstone Macro research form believes that the final bill will tinker “around the margins” and bring “disappointment to the market.” But Mnuchin brushes asides these concerns:

Mr. Mnuchin dismissed any suggestion that, for political expedience, the White House would forsake comprehensive legislation by seeking instead to pass a handful of smaller tax bills.

“We’re not cutting this up and doing little pieces at a time,” he said Friday.

Backlash in the Senate and From Experts

But Ryan faces the same problems he had with the healthcare bill. Despite not releasing any text, congressmen and senators have already insisted they cannot support the House’s tax plan. Last month, Ryan tried to persuade the Senate Republicans to accept the plan, but failed:

The next day, Sen. Tom Cotton took to the Senate floor to slam Ryan’s so-called border adjustment tax, saying “some ideas are so stupid only an intellectual could believe them.”

“Many other senators share these concerns and we most certainly will not ‘keep our powder dry,’” Cotton went on, without naming the speaker in his speech.

Senate Finance Committee Chairman Orrin Hatch reiterated to Trump and Ryan that the bill will not support it needs in the senate. Hatch said that Ryan “didn’t cover [the border adjustment proposal] as specifically as I would have liked.” Sen. Roy Blunt (R-MO) admitted that the committee “will likely go a ‘different way.'” Sen. David Perdue (R-GA) flat out said the plan is “beyond a complication” and described it as “a bad economic proposition.”

“The hard reality is the border tax is on life support, and given the imperative of 51 senators and 218 House members and one president, I think we need to look for other options,” he said.

Steve Forbes had very harsh words for the plan:

“The Republicans are proposing this crazy tax. They’re going to punish American consumers over $100 billion a year” over 10 years by making goods coming into the U.S. more expensive, Forbes told CNBC’s “Squawk Box” on Wednesday. “And these are Republicans doing it.”

“So now these Washington politicians are becoming currency swap traders and experts. It’s preposterous,” said Forbes. “[Also] people forget in Washington we have these elaborate global supply chains. You’re going to disrupt all of that and you don’t know what the consequences are.”

Congress Not Worried, but Too Many What Ifs

Let’s pick up where Forbes left off. Those who support the border tax adjustment think that any burdens the consumers face “would be offset by an increase in the dollar’s value due to the policy, thus negating the need for the importers to hike prices.”

But that quick change in the dollar’s value “could unsettle markets, hurt investors with holdings overseas, and change the Federal Reserve’s calculations about interest-rate decision.” From The Wall Street Journal:

Tax experts are puzzling over how to describe who wins and loses from border adjustment. One thing is clear, economists say: If the dollar goes up 25%, U.S. holders of foreign assets—including pension funds and endowments—would suffer a one-time loss in wealth of more than $2 trillion.

There is also global uncertainty: Other countries may retaliate, either by border-adjusting their corporate taxes or by challenging the U.S. plan at the World Trade Organization as too tilted toward American producers.

The Financial Times also reels in the GOP from fantasyland. If the dollar does adjust, it will not happen overnight. The adjustment could takes years, “historically been about a five-year lag between a current account shock and a full adjustment in the real effect exchange rate.” The article continued:

Prices tend to be sticky, particularly when 93 per cent of US imports and more than 40 per cent of global trade is invoiced in US dollars. These prices would have to be renegotiated over time. Furthermore, the Federal Reserve and the People’s Bank of China would do their best to lean against such a currency move.

This means the costs will burden the consumer.

Why does congress always have to complicate everything? If they would just lower the corporate tax rate and cut regulations, businesses – both foreign and domestic – would build plants here in America. Heck, it’s already happening in my depressed area of the Country. A foreign auto parts company is building a huge auto parts die-casting plant next to the local airport which will employ 350 people.

Our government is becoming an intolerable tyranny.