Will she or won’t she? 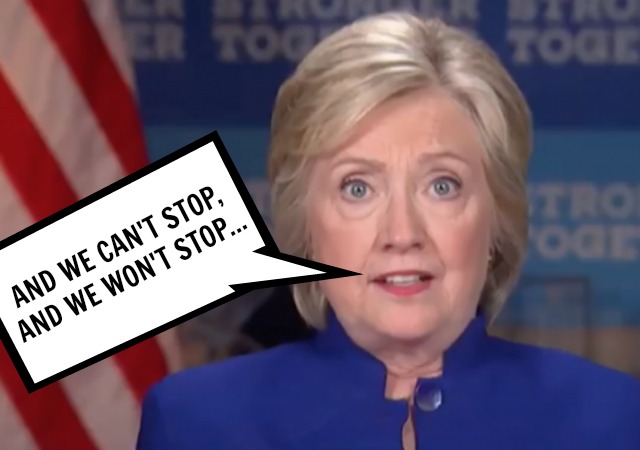 After an embarrassing electoral loss to Donald Trump, America wants to know — Will Hillary Clinton run for Mayor of NYC?

Since January, rumors continue to circulate that the embattled former Secretary of State is mulling another campaign.

The latest comes from an anonymous source, as reported by TMZ:

Hillary Clinton was at a small gathering recently with some politically connected people in NYC, and it seems she’s noodling the idea of running for mayor.

A source who was at the gathering last month says Hillary told the group she has not ruled it out and is taking a real look at it.

We’re told she was talking to people in her close circle to gauge the level of interest and support in a Clinton candidacy.

Our source made it clear … judging from the meeting, so far it’s just talk.

We attempted to reach Clinton, but no luck.

The Clinton camp has yet to confirm or deny the rumors. Whether or not they originated from Hillary’s team as means of testing the waters is also unknown.

After the Hillary for Mayor rumor first surfaced, a Q Poll was released testing how Hillary would fare against current Mayor, Bill de Blasio. Also included in the hypothetical electoral poll were a handful of other candidates.

Hillary led de Blasio 49 to 30 in the fictitious showdown.

De Blasio isn’t exactly a popular mayor, but even in the pretend polling, Staten Island was less than thrilled with the prospect of a Hillary mayorship.

It will fun to watch Hillary pass out on the campaign trail again.

and be chunked into the van like a side of beef.

If she declares to run, then Donald Trump Jr should declare and run against her. How much fun would Trump V Clinton take 2 be?

If she runs, she’ll win in a landslide. Then the destruction of NYC, which was almost accomplished in the 1970’s and then continued under Dinkins and Koch, and which has progressed tremendously under De Blasio, can finally be accomplished after the City has been sucked dry by the usual suspects.

Win, lose, or draw, this could be fun.

Somebody is propping her up, in hopes of making a profit. This could cause a scuffle with the locals who already have their place at the public trough.

NYC & HRC deserve each other…

it couldn’t happen to a more deserving set of a55holes.

How else is she going to get the cash spigots turned on again? This woman is a human leech, living on the money of others paid in exchange for influence. She’s got nothing else to offer.

Makes sense to me.

The NY mafia will be running the city again, as they did in the 60s and 70s.

But you watch: on the heels of de blasio fatigue, she’s going to lose.

It’s gonna be great to watch her humiliated again.

BUT, do look for legal trouble coming from the fed. As Trump has proposed defunding the leftist rat’s nest of PBS/NPR/NatArts, look for a legal surprise coming for this criminal, grotesque old hack.

Is there enough influence cash available in NYC to make it worth a Clinton getting out of bed in the morning? The global shakedown was crazy successful for relatively little effort. The Clintons are probably not really interested in fleecing locals for chump change. Inventing a new con for NYC would be too much like work, although I’m sure they still love hearing their names mentioned occasionally.

After being a carpetbagger for the Senate seat, she would be the same as a Westchester County resident, she does not live in NYC.