Will boycotting business and organizations return? 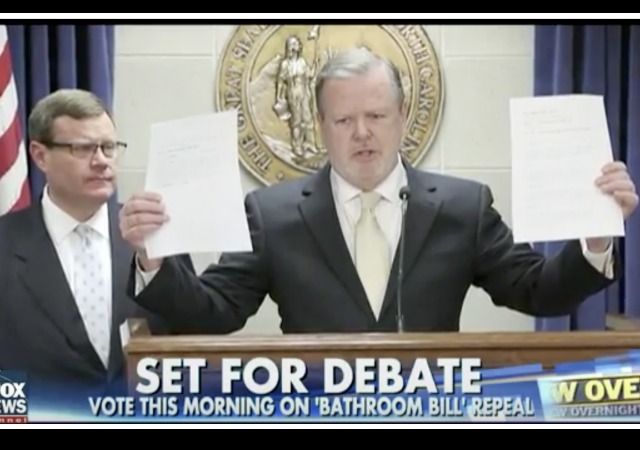 North Carolina government official reached a compromise to repeal House Bill 2, the controversial bathroom bill that required people to use the restroom of their birth sex. From CNN:

The deal was approved Thursday morning by the state Senate, and was headed to the House for a final vote. If approved, the bill would then go to Cooper.

“Compromise requires give and take from all sides, and we are pleased this proposal fully protects bathroom safety and privacy,” the state’s Senate Leader Phil Berger and House Speaker Tim Moore said in a joint statement. 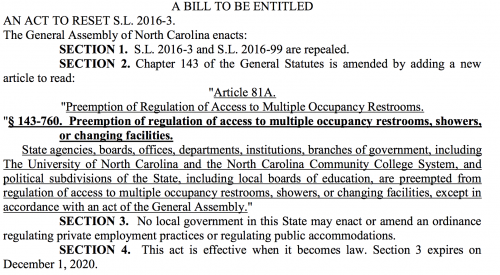 Gov. Cooper is a Democrat, but the Republicans control the state’s Senate and House. The Senate approved the bill Thursday morning, which now heads to the House. If those legislators approve it, the bill will be sent to Gov. Cooper:

“Compromise requires give and take from all sides, and we are pleased this proposal fully protects bathroom safety and privacy,” the state’s Senate Leader Phil Berger and House Speaker Tim Moore said in a joint statement.

Not everyone agrees with the bill, though. Chris Sgro, the executive director of Equality NC, called the bill “a shell piece of a legislation” which also keeps parts of the old bill alive:

They also object to this language: “No local government in this state may enact or amend an ordinance regulating private employment practices or regulating public accommodations” until December 2020.

That section effectively would stop, for the next three years, a repeat of Charlotte’s ordinance. Charlotte’s City Council had passed a rule that expressly permitted transgender people to use the bathroom that matches the gender they identify with.

“The initiative is not a repeal,” Sgro said. “It’s doubling down on the discrimination that HB2 exacts — it’s HB2.0. It doesn’t allow municipalities to protect people from discrimination till 2020.”

“It doesn’t do anything to better the lives of LGBT North Carolinians.”

So far, organizations that boycotted North Carolina due to the law have not spoken out. The NCAA pulled seven championship events, including the first and second round games of the NCAA men’s basketball tournament in protest of the original legislation.

The NBA moved its All-Star Game from Charlotte to New Orleans. Officials told the state Charlotte could be a contender for the 2019 game if North Carolina repealed the bill.

Artists and businesses have also boycotted North Carolina, including Bryan Adams, PayPal, Pepsi, and Hyatt hotels. Weirdly enough, though, none of them have boycotted places that actually arrest and detain transgender people.

Ah! The liberal mantra. “Do as I say, not as I do”. They are the biggest hypocrites on Earth. Women’s pay- they all pay women less than men. Minority hiring- they all have fewer minorities than nonliberal companies. Protests are patriotic- no conservative protest group has ever been called patriotic by the left. Pelosi actually called the TEA party members “Brown Shirts”. Gun control- they all have armed guards and live in guarded compounds but we aren’t supposed to have guns. It goes on and on.

Does this mean I can take showers with the high school girls again? /sarc

So, what’s the result? It looks like everybody in the state goes where their birth certificates say they should go, unless they’re in a government facility or a school, in which case they can go wherever they feel like. Did I get that right?

If so, NC managed to bungle it even worse than the first time. The ideal conpromise—everybody suffers far more than necessary.

Actually – when govt stays out private business can decide for themselves. They are only mandated when govt gets involved and tells them what to do. (Like Charlotte City Council did)

“Charlotte’s City Council had passed a rule that expressly permitted transgender people to use the bathroom that matches the gender they identify with.”

That sentence right there is a prime example of how to use language to obfuscate. Charlotte *mandated* – forced – all businesses, without exemption, to “permit” transgender (or not) people to use the bathroom of their choice. HB2 told the city they couldn’t do that, but didn’t tell businesses what they could or couldn’t do.

notamemberofanyorganizedpolicital in reply to jeffweimer. | March 30, 2017 at 2:36 pm

I predict a lot of business tearing out their bathrooms – and not building them in the first place.

“Go take a hike to the outside port-a-potty Busters!”

It went further than that.

This actually is a local issue to conform with local standards. However, social liberals targeting prepubescent and adolescent boys and girls for indoctrination and transgender — including homosexual — conversion therapy is not. Targeting mothers and fathers in political, economic, and social spheres is intolerable.

Start going to where the high school daughters the business leaders in favor of these practices belong and join them in their bathroom time. Make a point of finding the most perverse looking guys to join their daughters in the bathroom. Then target their wives for the same treatment.
Make sure they all have obvious cameras sticking out shirt pockets. Then sit back and laugh.
We have to make them live up to this bullshit and push it hard. Haven’t we learned a thing from the dems?

Republican’s, giving up even after they have won, as usual.

This is really scary!

Bathrooms? That’s small beer. I identify as Otto von Bismarck. When does the world give me the empire I deserve?

Your Bismarck is at Empire Donuts. ☺

(Closest I could get on short notice.)

Arminius: here. Have a mustache.

The rest of the country should boycott California over sanctuary status and everything else maddening about that place.