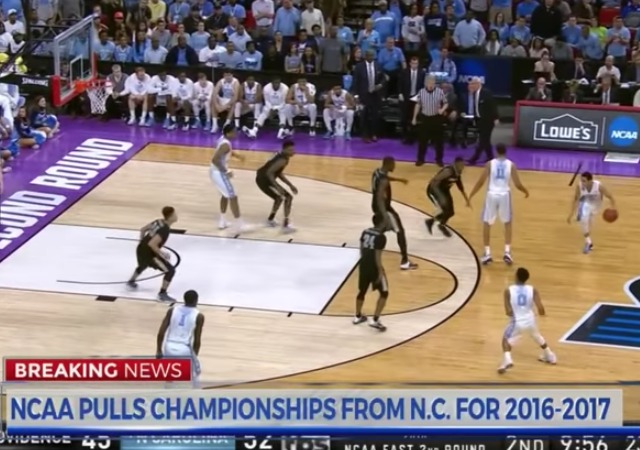 North Carolina’s Public Facilities Privacy and Security Bill have drawn another major boycott. The NCAA recently announced its decision to remove seven previously scheduled championship events from the state, including the first and second round games of the NCAA men’s basketball tournament.

In July, the NBA decided to move its All Star Game from Charlotte to New Orleans over the bill.

The NCAA released its decision Monday:

“Fairness is about more than the opportunity to participate in college sports, or even compete for championships,” said Mark Emmert, NCAA president. “We believe in providing a safe and respectful environment at our events and are committed to providing the best experience possible for college athletes, fans and everyone taking part in our championships.”

The board decided to move the events based on these factors:

North Carolina laws invalidate any local law that treats sexual orientation as a protected class or has a purpose to prevent discrimination against lesbian, gay, bisexual or transgender individuals.

North Carolina has the only statewide law that makes it unlawful to use a restroom different from the gender on one’s birth certificate, regardless of gender identity.

Five states plus numerous cities prohibit travel to North Carolina for public employees and representatives of public institutions, which could include student-athletes and campus athletics staff. These states are New York, Minnesota, Washington, Vermont and Connecticut.

The NBA move was considered big, but the NCAA jumping aboard the boycott train could create massive waves in the state. College basketball is YUGE in North Carolina, home to powerhouses Duke and UNC, one of the biggest rivalries in all of sports. North Carolina has also, “hosted 251 tournament games since 1951.”

North Carolina’s GOP lashed out at the decision:

This is so absurd it’s almost comical. I genuinely look forward to the NCAA merging all men’s and women’s teams together as singular, unified, unisex teams. Under the NCAA’s logic, colleges should make cheerleaders and football players share bathrooms, showers and hotel rooms. This decision is an assault to female athletes across the nation. If you are unwilling to have women’s bathrooms and locker rooms, how do you have a women’s team? I wish the NCAA was this concerned about the women who were raped at Baylor. Perhaps the NCAA should stop with their political peacocking — and instead focus their energies on making sure our nation’s collegiate athletes are safe, both on and off the field.

The NBA cited the same reasons for moving their All Star game. It said Charlotte could host the game in 2019 if the government changes the law.

Artists and businesses have also boycotted North Carolina, including Bryan Adams, PayPal, Pepsi, and Hyatt hotels. Weirdly enough, though, none of them have boycotted places that actually arrest and detain transgender people.

All they have to do is stick it out to November!!!

Um…they’d get arrested. Even in Charlotte…

…besides, think of the sunburn…!!!

This silliness needs to be stomped out. Pandering to the less than 1% of the population who regrettably are mentally ill by pretending the rest of us are bigots for refusing to play make believe along with them will not end well.

Yep. I can easily forego anything these idiots offer, and I will make a point to trade with North Carolina businesses and say why.

I wish there was something I could do to support North Carolina in this. But the top exports from NC are not on my shopping list! Tobacco, airplane parts, chemical wood pulp, frozen swine parts, …

Cheesecake by Alex would be better than airplane parts.

Please do. They need to hear from all of you, because you know the far left are pushing this hard!

Liberals are ruining every sport in this country.

Great, now even sports have become politicized. Thanks Obama.

Still waiting for the Girl Scouts to accept Heterosexual males as Scout Leaders.

Wait. They cannot ask now. Remember? Besides, wouldn’t it all depend on how the guy feels that day? He might feel all “female” when he goes in to play tickle games in Brittany’s tent.

Under some of the proposed bullshit from DOJ, a potential employer may not be able to ask about any criminal convictions.

DOJ stopped standing for Department of Justice when Jug Ears moved into the Big House.

It’s a sport, a damn game. It should be fun, a diversion from the trials and tribulations of daily living. Fun. Now, it’s being turned into anything but that, as least to me.

No matter. It’s a big, wide wonderful world, with plenty of activities which are still enjoyable and fun. So, continue to turn sports into unenjoyable events, because even without them I’ll live just as long and die just as happy!

That’s how you do it.

I wonder how many no-shows and tuned out TV’s for what number of events it would take before a message would get through to cut out the malarkey?

Political Sports should be killed ASAP. Maybe we can see how NCAA basketball fares without ACC Basketball and SEC football. Just drop the Title IX requirements as well by running these sports programs as independent entities with athletic departments funded wholly apart from the Universities they are attached to.

I’m sure the ACC, Big Ten, SEC, Big 12, and PAC-12 can all break away without hitting their own legitimacy.

ACC and the SEC need to lead the way.

So let me understand this… at the UNC the Head Coach and Administration allowed dozens of athletes to attend sham classes to maintain eligibility with the full knowledge of the Head Coach and the NCCA does nothing about that. But if the State objects to forcing women to shower with men because of a illegal Federal decree, then a boycott is in order?

What strange times we live in.

Well said. At the very least, the NCAA is completely losing sight of it’s role and mission.

Don’t forget, they also come down hard on coaches giving orphan brothers of players a ride to school.