Media-public disconnect is one of the reasons President Hillary Clinton could not be reached for comment.

If you only read the mainstream, openly left-wing, and establishment Republican media, you’d think it was Apocalypse Now in America.

Paraphrasing Pauline Kael’s alleged statement about how she didn’t see Nixon’s win coming because she didn’t know anyone who voted for him: The doom and gloom media doesn’t know anyone who doesn’t hate Trump and who isn’t despondent, or if they do know such people, they discount them as imbeciles.

But that’s not what is reflected in the American spirit, as numerous polls have recently shown.

Optimism is rising, as we noted in an earlier post.

Americans’ confidence continued to mount last week as the Bloomberg Consumer Comfort Index reached the highest point in a decade on more-upbeat assessments about the economy and buying climate, figures showed Thursday. 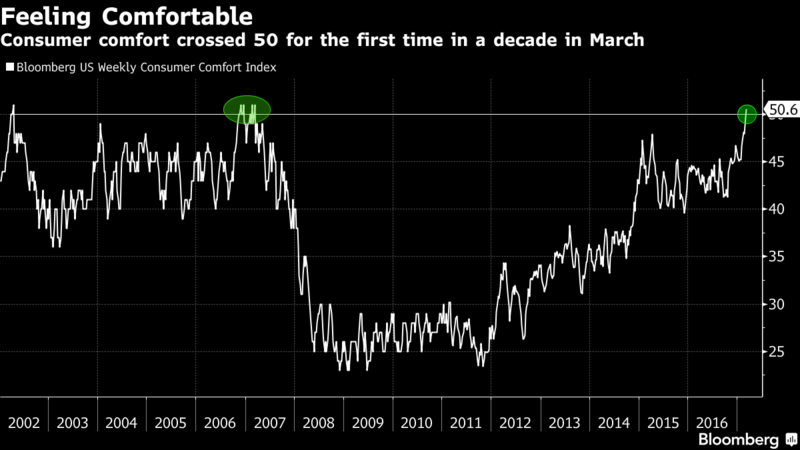 This is consistent with recent findings that Consumer Confidence is at a 15-year high:

U.S. consumers are the most confident in the U.S. economy in 15 years, buoyed by the strongest job market since before the Great Recession.

The survey of consumer confidence rose to 114.8 in February from 111.6 in January, according to the Conference Board, the private company that publishes the index. That’s the highest level since July 2001.

The U. Michigan Consumer Confidence index has similar findings:

As does Gallup, US Economic Confidence Index at Record High of +16: 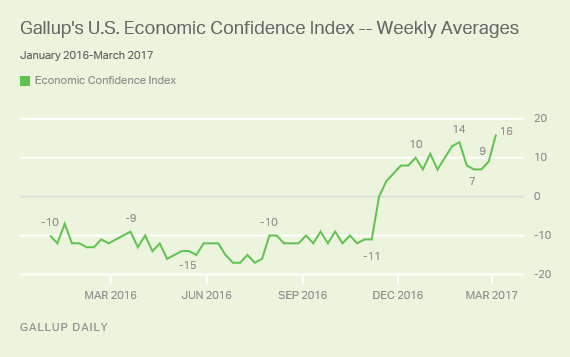 Gallup also fpund an upswing in personal satisfaction just prior to the Inauguration, In US, Personal Satisfaction Back to Pre-Recession Levels

Business executives are reporting their highest level of optimism about prospects for the U.S. economy in more than a dozen years, according to the first-quarter AICPA Economic Outlook Survey, which polls chief executive officers, chief financial officers, controllers and other certified public accountants in U.S. companies who hold executive and senior management accounting roles.

This type of media-public disconnect is one of the reasons President Hillary Clinton could not be reached for comment.

Sir, I’m sure that you meant to spell Pauline’s last name Kael.
You have a great blog. Keep up the good work!

So we got a Sad Sack media……

I’m much more of a news junkie than most, and even I am now just starting to tune out all of this blah blah blah from the cable outlets. It adds nothing to my life, and it never changes.

And this isn’t just about me – when I talk to just about everyone I know, they tuned out a month ago or more. The MSM can’t understand that the more they hyperventilate and shriek “HE’S THE WORST HITLER SINCE HITLER!” the more ordinary people realize it’s just not worth bothering to even listen to anything they have to say anymore.

If there were only more Perry Mason reruns.

I watch Mad Men when the political noise gets too loud. It just calms me down.

I’ll take TCM and Cable HGTV for entertainment. Cable Fox for News. Drudge for their news cycle, LI, Hot Air, Daily News for blogs and digital NY Post because their editorial board who “call out” the NY Times in a heart beat.

So you’re saying it took the media themselves to find a cure for the “Murray Gell-Mann Amnesia Effect”?

“ARE YOU NOT ENTERTAINED” should be the subtitle on that pic

Personally, I watch Tucker Carlsen and Sean Spicer news conferences, which pretty much takes up whatever time I have (and I do that for free on YOU TUBE). I enjoy LI blogs very much, too!

Those are signs closer to a top than a trough.

Historically, recessions happen because businesses become over confident and expand too quickly. They end up with excess inventory. The excess inventory then has to be worked off, so they cut production and lay people off. The people who are laid off curtail their spending and the "viscious cycle" to recession starts.

Manufacturing is a smaller share of the economy today than it's ever been, so maybe the inventory cycle doesn't matter as much as it used to. Also, business executives have access to more real time data and systems than they've ever had, so they should be able to quickly adjust production to match changes in demand.

If I had to bet, I'd say that the data execs now have at their fingertips and the fact that sectors like services, internet and knowledge are becoming more dominant (inventory is less important), we will either avoid a recession or if we have one it will be very short and shallow.

But if I saw those indicators in my first sentence and it were 1970 rather than 2017, I'd be concerned.

The fundamental problem with the media, and the propaganda machine that is polluting social media, is that it is aimed at shutting down responses by a large and growing portion of the population. CNN has been caught cutting off speakers, Twitter has erased large numbers of comments, Reddit has invited David Brock and his rabid horde of bots to have a massive platform with inhibited response from others.

The shut-downs are vicious, highly personal, and dishonest.

Repression, however, does not change personal opinions: it only drives them to other places.

Anybody who wants to know why our media missed predicting the Trump win need only look to the obvious repression of opposing viewpoints. That, and the outright, easily-exposed lies. Oh, and the corruption that has been exposed. Not to mention the leaks, crimes, and suspicious murders. This happened in the USSR, too. And in the USSR, faxmachines were used to bypass the media, and enforce regime change.

I had my facebook throwaway acct disable ,must have ticked off some lefties.

“On a clear day you can see forever”, but from inside the LibDem media bubble they can’t see past their noses.

I have a house on the coast of NC. Rented during the summer vacation season. Near fully booked already for the first time this early.