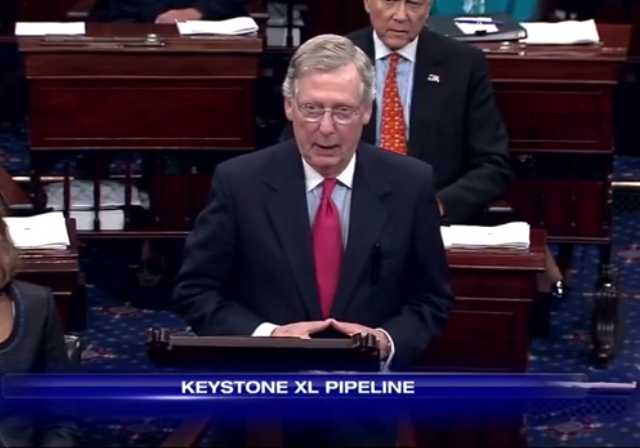 Tax reform has been at the forefront of GOP policy issues in Washington. Under the Trump administration, tax reform includes a proposed border adjustment tax or tariff. Treasury Secretary Steven Mnuchin and the White House want tax reform legislation in the works by August, but Senate Majority Leader Mitch McConnell (R-KY) said an August timeframe is unlikely:

“I think finishing on tax reform will take longer. But we do have to finish the health-care debate, up or down, win or lose, before we go to taxes,” McConnell told Politico.

“Tax reform remains high on the president’s priority list,” Spicer said, noting that he expects Congress to remain “on schedule” when it comes to President Trump’s major legislative goals.

President Donald Trump wants Congress to concentrate on healthcare before they touch tax reform. The House GOP released an Obamacare revision last week, but a lot of conservatives have not embraced it.

The border adjustment is a tariff. It adds a tax on imports, which will inevitably raise prices on consumers. Common sense economics: a business must make a profit in order to supply goods and services. It cannot do that without money. In order to make money when a tax is added or raised, the business must raise the price of its goods to make that profit.

Speaker Paul Ryan (R-WI) tried to push the border tax on Senate Republicans, but Sen. Tom Cotton (R-AK) slammed it on the Senate floor. Sources said that Sen. Orrin Hatch (R-UT) told Trump and Ryan the tax plan will not receive the support it needs in the Senate.

But the tax debate includes much more than the border adjustment tax. On March 1, Mnuchin appeared on Fox Business to assure people that most deductions will not be on the chopping block:

“Let me first clarify, we are not taking away the charitable deduction and we are leaving the mortgage interest deduction as is,” Mnuchin said in an interview on Fox Business Network.

“We think those are both very, very important. But what we are going to do is we are looking at other things where the reduction in deductions will offset the rate,” he said.

It would be terrible if that junk in the dollar store cost $1.30.

The headline punched up the story a bit, calling it a “battle” between McConnell and the White House, over a deadline.

Having said that, though, the WH and Congress arguing over the timeline reminds me of all the months wasted in those Paris peace talks in the 70s, negotiating the size, shape and location of the table with Hanoi.

There needs to be less daylight between the executive and legislative branches. Quit arguing about the calendar and just get the dam n job done. All of them!

If these are the Paris Peace Talks, then we and Trump are the Americans, and McConnell and Ryan are the North Vietnamese.

McConnell has no intention of doing anything about tax reform, or anything else that the Republican Party has promised Republican voters.

Because allowing people to keep more of their hard earned money is such a terrible thing.

Apparently these dilettantes can only do one thing at once.

The US Senate, the “greatest deliberative body in the world”, can’t multi-task?

It’s time to recall McConnell and his ilk. The people want action NOW.

Why bother trying to recall him – just pressure the GOP to dump him from the senate leadership position.