The last time we checked in on the Environmental Protection Agency, a long-time staffer and social justice warrior had just tendered his resignation after recognizing the political climate had dramatically changed.

Things are about to get a little hotter for this merry band of bureaucrats, as they are being sued by Judicial Watch.

The watchdog group is seeking copies of the EPA’s proposals and awards for environmental justice grants delivered in 2014 and 2015, and said it hasn’t been provided with any documents yet.

“This is a simple records request and the fact that the Obama EPA ignored it for years tells you the agency has something to hide,” Judicial Watch President Tom Fitton said in a press release.

The team at Judicial Watch would like to...follow the money.

“The Obama EPA’s ‘environmental justice’ slush fund for its leftwing allies needs to be exposed,” said Judicial Watch President Tom Fitton. “This is a simple records request and the fact that the Obama EPA ignored it for years tells you the agency has something to hide.”

I am certain it will take years for legal excavators to uncover the pyramid of corruption, cronyism, and incompetence that occurred during the Obama Administration. Meanwhile, in order to write his memoirs, the former President is extending his stay in the South Pacific (though, if there were real justice, Obama would now be in Cuba).

Additionally, the setting likely offers Obama consolation as the new head of the EPA prepares to execute a new executive order from our current President:

Pruitt also revealed in an interview with ABC News chief anchor George Stephanopoulos on Sunday that President Trump will this week sign a new executive order that will eliminate a signature Obama-era policy for combating climate change, the Clean Power Plan.

But Pruitt said on ABC’s “This Week” that the Obama administration had “a very anti-fossil fuel strategy, coal, natural gas and the rest” and that Trump aims to change that with the goal of producing jobs and lowering electricity rates for consumers.

Obama’s EPA policies aren’t the only ones on the chopping block, either. President Trump just signed away 4 of Obama’s pet programs to the dustbin of history.

The president canceled the “Fair Pay and Safe Workplaces” rule, which blacklists companies from receiving federal contracts if have violated labor rules in the past, the “Planning 2.0” rule, which dealt with how to use 245 million acres of federal land and was opposed by the energy industry, and two regulations under the “Every Student Succeeds Act,” which Trump said removes “an additional layer of bureaucracy to encourage freedom in our schools.”

I sure hope they serve a lot of tropical drinks on that South Pacific Island. Obama is surely going to need them. 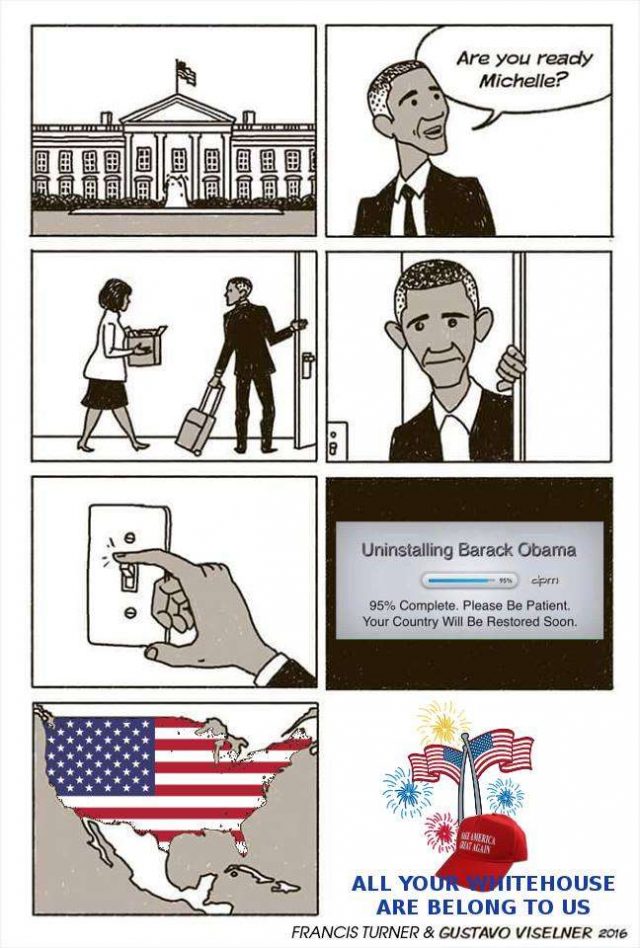 I catch MSM in dribs and drabs. Nice to see they are in full hate melt down sycophant mindless drone mode against Trump.

The daily napalm from Trump still has that new President smell to it.

Hope they figure out health care.

I hope somebody’s working on a way to put that in a spray can. We won’t always be able to get the real thing.

I hope that Pruitt’s EPA sues the heck out of Seattle for their dumping of untreated wastewater and sewage into the Puget Sound….. It’s been going on since February.

Go after the blue states.

The EPA needs some serious housecleaning on itself first, for its own droolingly stupid act which turned the Animas River orange for a week. That stuff was actively poisonous.

Untreated wastewater gets so diluted in the Sound that it’s no where near as hazardous, no matter how much the sensitive urbanites caterwaul.

It is going to take years to undo the crap that Obama did to our country. Except the billions that went to Iran and the trillions in new debt. That money is never coming back…

Generations. Keep in mind, Obama was just the result of a lot of societal forces that had been building for decades.

Years ago I visited the USS Constitution. The Sailor, a female Petty Officer, briefed us on the men AND WOMEN who served aboard her. As If women were allowed in the armed forces during the war of 1812 or something.

In 2011 the USN “celebrated” the centennial of naval aviation. I put that in scare quotes because due to PC they had to give women equal time in the presentation.

Kara Hultgreen, who was supposed to be the first carrier-qualified combat pilot was killed in 1994 by bunch of Admirals sucking up to Congress after Tailhook. She didn’t deserve that, and I bet you’ve never heard a perspective other than the one advanced by the admirals, who put her in an impossible position. The flight instructor who downed her was trying to save her life.

But, 1994. I love women, but 1994. Maybe some of the ladies will chime in but from 1911 until 1994 all of the major accomplishments in naval aviation were made by men. I’m not saying it was fair. It’s just a fact. And I would not like being patronized like this.

I am not picking on women. I have no desire to do so. I am picking the subject out of the back of the dump truck full of taboos that require us to rewrite our history. Women, God love them, have been flying tactical aircraft off of carriers for less than 15 years. Yet during the “celebration” of naval aviation, they had to celebrate that 15 years as much as the eighty years when women had nothing to do with it.

And then there’s the issue with minorities.

You know what the white wingman of the first black naval aviator did?

Crashed his plane into a Korean mountain trying to save him when he was shot down.

Again, not to pick on anybody, but time is limited. You only have so much time to cover 100 years of naval aviation. And if your politics dictate that you must talk about certain people because of their genitalia or skin color, you are going to leave other people out of the presentation who, no kidding, did something.

I don’t care what job you did. If you wore the uniform, male female, black or white or Chinese and completed your service honorably, I respect you. But this rewriting of history is just one example of the mental disease that results in Obama.

If you can look into a mirror and say it’s too hurtful to point out that there were no women serving aboard the USS Constitution during the war of 1812, you have a problem. And I don’t want to adopt it. I will not adopt it.

briefed us on the men AND WOMEN who served aboard her

Interesting, I hadn’t heard that. A weird bit of propaganda, but it may not be strictly incorrect.

As I recall, Constitution‘s last combat was just after the official end of the War of 1812, when she captured HMSs Cyane and Levant. She remained active through the 1840s (patrolling the Mediterranean for Muslim pirates or some such thing), was relegated to training during the Civil War, ran aground off England in the 1870s (and was floated off and repaired gratis by the Royal Navy), and removed from active service about 1880.

The full combat crew of the Constitution was, incredibly, 450 men (all packed into a dinky 200 foot hull), though it was usually a bit under strength. Obviously during her active career to the 1880s, none of them were women.

A little before WWI Constitution was designated a museum ship, rescued from the breakers by public outcry and extensively rebuilt around 1930, taken under tow on a tour of both coasts in the early ’30s, and of course is now floating in Boston a few yards from where she was constructed in the 1790s.

All that time she was still a Navy ship. She now has a Navy crew of some 60 officers and (what, “men” … whatever). And some of those could be women. So, even though there were no women on board (for that matter, none even in sight) when Constitution made herself a household name, they could be in her bona fide Navy crews during her retirement years.

You are most cordially welcome to believe what you want.

My neighbor has a Pekinese named Shiela. I have it on good authority that Shiela identifies as a male Belgian Malinois.

If that little Chinese dog wants to go through MWD training like the big shepherds and malinois, who are we to tell it “no”? It should have the same rights as every other dog. Lower the standards if you must, but all dogs deserve to be in the military. Nevermind it probably can’t do the job or could get others killed, you’re violating it’s Constitutionally-protected feelings!

Don’t worry. Xe is only joining the military to get the final transition surgery. Which apparently puts you at the head of the line at the VA.

Your trans-friendly military in action.

Now, bake me a cake, bigot!

OK, since the subject is “Environmental Justice Grant Records” my comment about a transgendered transbreed kitten isn’t really off topic.

Oh, didn’t I mention she’s he’s a cat? That was just the species she he was assigned at birth by an obviously racist veterinarian.

…Blue returned to Guadalcanal, arriving 21 August. At 0359, 22 August, while patrolling in “Ironbottom Sound” she was torpedoed by Kawakaze. The explosion wrecked Blue’s main engines, shafts, and steering gear, as well as killing nine men and wounding 21. Throughout the 22nd and 23rd, unsuccessful attempts were made to tow Blue to Tulagi. She was scuttled at 2221 on 23 August 1942 after all attempts to save her failed.”

Bet you never heard about Blue.

My dad served in cutters named Owasco and Cherokee.

Still waiting for the destroyer or cutter named Dago or WOP.

Injuns, you are not pulling your weight.