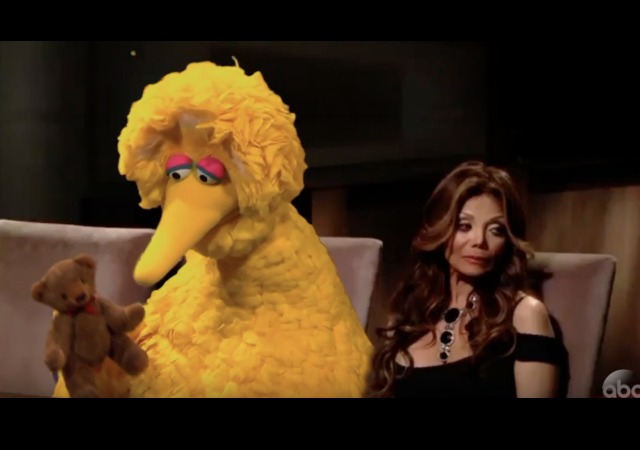 One problem with this. Sesame Street currently airs on HBO.

Kimmel inserted Big Bird into an episode of The Celebrity Apprentice:

“I guess we’ll have to find a new place to live,” said a despondent Big Bird.

“It’s too bad, but that’s the way it goes,” said Trump looking at his son, Donald Trump Jr.

Again, Sesame Street moved to HBO back in 2015. These episodes only air on PBS after a nine month window:

Sesame Workshop CEO Jeffrey D. Dunn said the deal ““provides Sesame Workshop with the critical funding it needs to be able to continue production of Sesame Street and secure its nonprofit mission of helping kids grow smarter, stronger and kinder; it gives HBO exclusive pay cable and SVOD access to the nation’s most important and historic educational programming; and it allows Sesame Street to continue to air on PBS and reach all children, as it has for the past 45 years.”

In addition to the next five seasons of Sesame Street, Sesame Workshop will also produce a Sesame Street Muppet spin-off series as well as develop a new educational series for children.

I believe Kimmel has a lot of money along with his Hollywood friends. If this is such an important issue for them why can’t they all get together and help fund it? Why must the government do it?

Kimmel also mocked the cutting for Meals on Wheels, which is not entirely accurate. The majority of the funding of the program comes from private donations. The government funds falls fifth on the list of the programs funds:

The relevant Department of Housing and Urban Development section of the budget contains the following language:

Eliminates funding for the Community Development Block Grant program, a savings of $3 billion from the 2017 annualized CR level. The Federal Government has spent over $150 billion on this block grant since its inception in 1974, but the program is not well-targeted to the poorest populations and has not demonstrated results. The Budget devolves community and economic development activities to the State and local level, and redirects Federal resources to other activities.

Meals on Wheels, a program that supports the delivery of meals to seniors who cannot afford food or cannot prepare it, started in Australia and has been in the United States since 1954. The program serves 2.4 million seniors every year and does get funding from the Community Development Block Grant program.

But the situation is complicated and saying that the budget eliminates the Meals on Wheels program is factually incorrect. According to the Meals on Wheels annual IRS filing for 2015 (it isn’t a government program), approximately 3.3 percent of its funding comes from government sources. Most is from corporate and foundation grants, with individual contributions the second largest source. Government grants are actually the fifth largest source of revenue.

And not only is the government not a government program, it is not FREE to seniors and the disabled. Individuals are expected to pay $5 per meal. Some states give seniors their Food Stamp benefits as a cash grant in order to allow them to access Meals on Wheels.

I didn’t know that they paid. That’s pretty good all the way around.

I checked the website of my local Mobile Meals and it was voluntary, but some payment was encouraged from $.50 to $5.00.

Kimmel is just reading from a script. A script produced by the same people who pushed through ObamaCare based on the idea that the American voter is stupid.

It used to be true. Now, not so much.

From the Meals on Wheels website – 35% of funding is from the HHS Dept and the Older American Act. The funding through the Community Block grants is much less.

” STATEMENT CLARIFYING FEDERAL FUNDING TO MEALS ON WHEELS
Mar 16, 2017
The nationwide Meals on Wheels network, comprised of 5,000, local, community-based programs, receives 35% of its total funding for the provision of congregate and home-delivered meals from the federal government through the Older Americans Act, administered by the U. S. Department of Health and Human Services, Administration for Community Living. Other federal funding sources that support Meals on Wheels program operations may include the Community Development Block Grant, Community Services Block Grant or the Social Services Block Grant. In addition, programs rely on contributions from state or local governments, private donations and other resources to cover the rest, demonstrating one of the best examples of a successful public-private partnership. Meals on Wheels America, the largest and oldest national organization representing senior nutrition programs across the country, receives only 3% of its funding from the government, specifically to run the National Research Center on Nutrition and Aging. ”

Note this phrase: “receives 35% of its total funding for the provision of congregate and home-delivered meals”

That’s Meals for Wheels playing creative accounting (by applying federal funds to only the provisioning account) with the funds it receives. Don’t be fooled.

The accounting will depend on how the grant was written. It may be that the money that they get from HHS may be limited to obtaining, cooking and distributing food. If it’s from block grants, then who knows….

Accounting & managing government grants is always interesting. My most frustrating time was going to an EEOC conference and asking the head of the district if I could limit the employment ad to conform to what the DOJ grant mandated. No, she said I had to place the ad stating that we were an EEO employer. But, I had to hire a female Native American drug counselor. Even in Oklahoma, that was a difficult task.

I checked my city’s “Mobile Meals” and while they are part of the MOW network, they don’t accept government funding. My quilt guild makes place mats for them and I have gone to dollar stores to pick up small things that can be gifts during the holidays.

Capitalism must really scare these folks. Big Bird will do just fine in commercial marketplace — and I think that scares these Socialists more than anything.

Goodness, as intellectual property, Big Bird may be as valuable is Mickey Mouse.

If its on public TV, that darn bird should be turning a profit for the American people, not giving us Bird poop.

Why is anybody “producing” Sesame Street?

It was creative, even electrifying, fifty years ago. But it’s long since turned into pedestrian mush, cranked out by time-servers. They’d do far better to just keep rerunning the old ones.

The material hasn’t changed—it’s still “brought to you by the letters A through Z”, but the audience changes every few years. So show the oldies over again. It’s not like the alphabet wears out and has to be replaced.

Civilizations rise and fall, but bureaucracies mummify and then never go away.

Capitalism doesn’t scare them – the idea that Big Bird can no longer be used to indoctrinate children to leftism does.

Kimmel is a bozo. Never watch his show anymore.