Iran Arrests Two Catholics as Regime Cracks Down on the Faith

Iran Arrests Two Catholics as Regime Cracks Down on the Faith

Still dangerous to practice Christianity in the Islamic country. 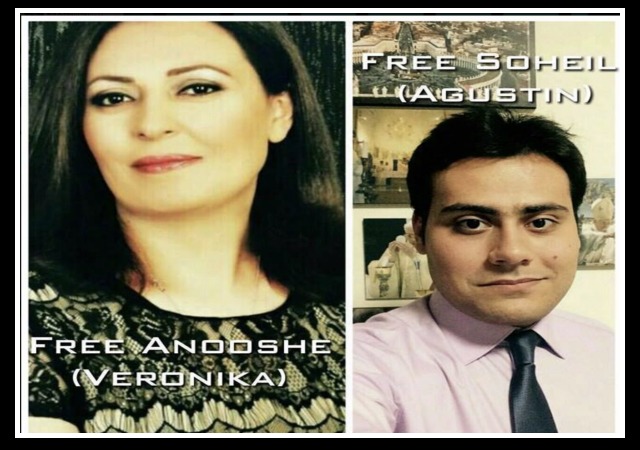 On February 20, the Iranian regime arrested a Catholic mother and son as it continues to crack down on the faith. Unfortunately, there is no update on the two of them.

Anousheh Rezabakhsh and Soheil Zargarzadeh converted to Catholicism in Istanbul, Turkey in August 2016. It just goes to show that Christians still have to practice their faith in secret in the Islamic country.

The Islamic Revolutionary Guard Corps raided their home and “confiscated their Bibles and other Christian materials.”

The officials took the two to an undisclosed location.

Eliot Assoudeh, an Iranian-American academic at the University of Nevada told Fox News that both the situation “is very sad and concerning, especially as they both are dealing with health issues.” Despite the risk, Christianity remains on the rise in Iran:

Assoudeh, who recently presented an article on The Islamic Republic of Iran: Between Theocracy and ‘Clerical Fascism,’ said the U.S. should do more to protect Christians across the world who are under attack.

“The United States, its Western allies, and the international human rights organizations should show their concern, call on the Islamic Republic authorities and demand the immediate release of these two Christians,” he said.

But leaving Islam is punishable by death in Iran:

Julie Lenarz, the executive director of the London-based Human Security Centre, told FoxNews.com that many Christians “are convicted in sham trials and linger in jail for years as prisoners of conscience. They face harassment, torture or even execution.”

She said these groups are specifically targeting converts.

“Leaving Islam or converting to another religion is punishable by death in the Islamic Republic of Iran,” Lenarz said.

A Facebook page exists to keep people updated on this situation and petitions to set them free.

Three other Christian converts have appealed their sentence of 80 lashes for drinking Communion wine:

Yaser Mosibzadeh, Saheb Fadayee and Mohammad Reza Omidi were detained on in May last year along with their pastor Yousef Nadarkhani, as they were celebrating communion. “They have all been charged with acting against national security and have had two hearings, but a verdict is still pending,” said Christian advocacy group Middle East Concern (MEC) in a statement to BosNewsLife.

“Yaser, Saheb and Mohammad Reza were also charged with consumption of alcohol for drinking wine at communion and sentenced on September 10 to receive 80 lashes each,” MEC said.

Open Doors USA, a group that monitors Christian persecution, has placed Iran as the eighth most dangerous country in the world for Christians.

Hundreds of Iranian citizens have been converting to Christianity, and many are being baptized in large ceremonies in underground churches held in private homes across the country. This month, Christian ministry ELAM estimated that more than 200 Iranian and Afghans were secretly baptized in a service just across the Iranian border.

“It’s an astronomical increase,” Mani Erfan, CEO and founder of CCM Ministries, which has been involved in Iran’s underground church movement for more than two decades, told FoxNews.com. “And it’s been predominately young people. We call it an awakening.”

Efran told Fox that the youth have “grown tired of the regime’s oppressive religious rule.” He described it as “a counter-culture” and a “counter-revolution to the [1979 Iranian] Revolution.”

Experts believe Iran will house 10 million Christians by 2020, making up 10% of the population.

the blood of the martyrs is the seed of the church..

golden rule “do unto others as you have do unto you”, here is a corollary to that rule, ‘do unto others has they have done unto others’, in other words tread Muslims as the have treated other religions

Thinking back on the 2009 uprising in Iran and how Obama did absolutely nothing, not even a word, to help. How far we have NOT come.

They’re just following their Allah’s and their prophet’s orders.

By “emigrate in the way of God” the verse means to become Muslims. If they later “turn their backs on Islam” then kill them.

Some Zanadiqa (atheists) were brought to `Ali and he burnt them. The news of this event, reached Ibn `Abbas who said, “If I had been in his place, I would not have burnt them, as Allah’s Messenger forbade it, saying, ‘Do not punish anybody with Allah’s punishment (fire).’ I would have killed them according to the statement of Allah’s Messenger, ‘Whoever changed his Islamic religion, then kill him.'”

The word for apostasy in Arabic is irtidad. It’s possible to apostatize in all manner of ways without consciously leaving Islam, such as failing to perform one of the pillars, such as not performing five daily prayers or not showing up at the Mosque for Friday prayers. Murtad is the word for someone who leaves Islam for another religion or no religion at all.

This is a Sunni hadith, but the Shia have their own ahadith collections as you can see. And it’s the same Quran for both.

The good news is that the mother, at least, won’t get the death penalty. Because women are inferior to men according to Allah and his prophet, Iranian courts just imprison them indefinitely, feed them the minimal amount of food necessary, and beat them five times a day. If they convert back to Islam they can leave prison.

Don’t ever try to tell me Islam is a religion of peace.

P.S. It’s likely that Muhammad never placed burning people alive off limits. Muhammad himself wanted to have someone else lead the prayers while he and a few helpers left the mosque to burn people’s houses down around them if they had failed to show up.

And two of the four “rightly guided” caliphs, Abu Bakr and Ali, did burn people alive for apostacy. It’s impossible for me to imagine they would have done that if Muhammad really had forbade it. These men were Muhammad’s closest friends.