Haley Puts UN on Notice: “The Days of Israel-Bashing are Over”

Haley Puts UN on Notice: “The Days of Israel-Bashing are Over”

These heels are made for kicking 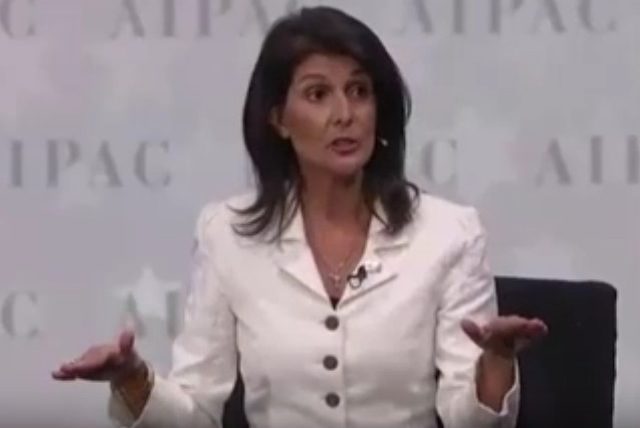 New United Ambassador to the UN Nikki Haley wowed the audience at AIPAC this evening, saying “The days of Israel-bashing are over,” in a conversation with former Defense Department official Dan Senor.

Haley told Senor that while she had heard that there was anti-Israel bias at the UN “you can’t comprehend how ridiculous it is.”

Senor introduced Haley, comparing her to predecessors Daniel Patrick Moynihan (as Prof Jacobson has done) and Jeane Kirkpatrick. Haley did not disappoint.

She began her explanation of how she would change the UN by saying, “I wear heels. It’s not for a fashion statement. Because if I see something wrong, I’m going to kick them every single time.”

After sketching how the United States would approach the UN to bring about change at the institution she first said the US would put the UN on notice that it would defend its friends, specifically Israel. “The days of Israel-bashing are over,” said Haley.

Haley told of how she blocked a UN attempt to install a former Palestinian Authority official as a representative of the UN, saying that there are “no freebies for the Palestinian Authority” until they negotiation seriously with Israel. Then she explained how she pushed for the UN to withdraw a report that accused Israel of practicing apartheid that led to the resignation of the head of the agency who issued the report.

Haley is finally the voice the US needs in the UN.

Her full remarks are here:

She wasn’t my first choice for anything in the Trump admin, but it looks like she may be the ONLY person in it with a pair!

No surprise that she is willing to fight for what is right.

She has had to have courage since the democrats and members of the MSM made fun of her because of her Indian heritage. Of course, since it was liberals doing that, it’s not racism.

So when the antisemites at the UN think it is business as usual, they have someone who is not afraid of them or their democratic apologists or the MSM.

I was thrilled when she was chosen; a great choice.

Yeah, she is great.
Personally, I prefer a transcript though.

I admit I don’t know much about Mid East politics, but I watched the Prager vid on Palestine’s rejections of independent state offerings and Vox’s (yes I watched Vox, once, won’t be a habit) vid on the history of the conflict between Arabs and Jews.

I found both very informative for different reasons, and feel like I have just a little more understanding now. I still don’t have anything beyond the “talking points” version for either side, but at least I know more about what each side is throwing out there.

Where can I go to meet a nice Sikh woman?

I already know the answer. And I’m not converting to
Sikhism.

Q: Can Sikhs marry someone from another religion in the Gurdwara Sahib? “

Good for Nikki! It’s long past time someone from this country put those Israel bashing buzzards on notice.

It is important to point out that while Nikki Haley no doubt has a foreign policy, she is in her current capacity implementing the President’s foreign policy. So good on her for doing her duty faithfully with zeal and exuberance. But it isn’t just someone putting the buzzard’s on notice. It’s the United States of America.

And I’m so cool with that.

Excellent point Arminius. Thank you for stating it.