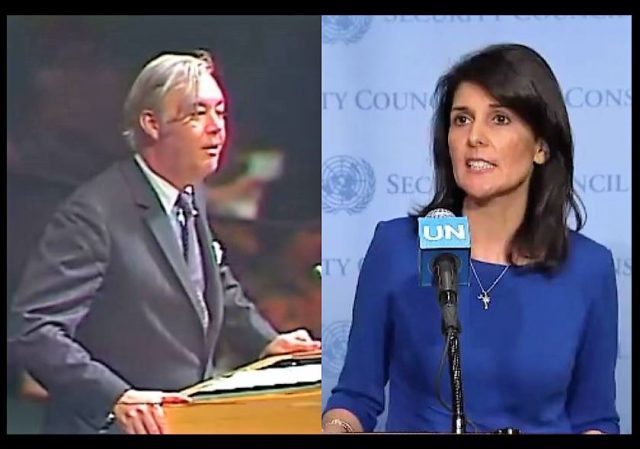 Nikki Haley always has been pro-Israel. But as U.N. Ambassador, she doesn’t get to voice purely personal opinions, but rather, speaks for the administration.

Yet, any ambassador cannot help but bring his or her own style and wording to the job.

We certainly saw that with Ambassador Daniel Patrick Moynihan, when he lambasted the U.N. General Assembly after passage of the infamous (and now revoked) 1975 “Zionism is Racism” Resolution 3379.

Given that the rhetoric from the anti-Israel boycott movement, including far-left regressive Jews, mirrors the “Zionism is Racism” resolution, it’s worth revisiting Moynihan’s words.

Here is an excerpt from Moynihan’s speech:

(full audio here, worth listening to the whole thing)

Haley just had her Moynihan moment, though I suspect she’ll have many more before her tenure is over.

At her first press availability since becoming Ambassador, Haley lashed out at the blatant anti-Israel bias of the U.N. in general, and the Security Council in particular.

Here is her full prepared statement. I was going to excerpt it, but it’s just too good (emphasis added):

The first thing I want to do is talk about what we just saw in there. The Security Council just finished its regular monthly meeting on Middle East issues. It’s the first meeting like that that I’ve attended, and I have to say it was a bit strange. The Security Council is supposed to discuss how to maintain international peace and security. But at our meeting on the Middle East, the discussion was not about Hizballah’s illegal build-up of rockets in Lebanon. It was not about the money and weapons Iran provides to terrorists. It was not about how we defeat ISIS. It was not about how we hold Bashar al-Assad accountable for the slaughter of hundreds and thousands of civilians. No, instead, the meeting focused on criticizing Israel, the one true democracy in the Middle East. I am new around here, but I understand that’s how the Council has operated, month after month, for decades.

I’m here to say the United States will not turn a blind eye to this anymore. I am here to underscore the ironclad support of the United States for Israel. I’m here to emphasize the United States is determined to stand up to the UN’s anti-Israel bias. We will never repeat the terrible mistake of Resolution 2334 and allow one-sided Security Council resolutions to condemn Israel. Instead, we will push for action on the real threats we face in the Middle East.

We stand for peace. We support a solution to the Israeli-Palestinian conflict that is negotiated directly between the two parties, as President Trump reiterated in his meeting with Prime Minister Netanyahu yesterday. The outrageously biased resolutions from the Security Council and the General Assembly only make peace harder to attain by discouraging one of the parties from going to the negotiating table.

The double standards are breathtaking. Just a few days ago, the United States sought unsuccessfully to have the Security Council condemn a terrorist attack to Israel, where the terrorist opened fire on people waiting for a bus and then stabbed others. The Security Council would not hesitate to condemn an attack like that in any other country. But not for Israel. The statement was blocked. And that’s downright shameful.

Israel exists in a region where others call for its complete destruction and in a world where anti-Semitism is on the rise. These are threats that we should discuss at the United Nations as we continue working toward a comprehensive agreement that would end the Israeli-Palestinian conflict.

But outside of the UN, there is some good news. Israel’s place in the world is changing. Israel is building up new diplomatic relationships. More and more countries recognize how much Israel contributes to the world. They are recognizing that Israel is a beacon of stability in a troubled region, and that Israel is at the forefront of innovation, entrepreneurship, and technological discovery.

It is the UN’s anti-Israel bias that is long overdue for change. The United States will not hesitate to speak out against these biases in defense of our friend and ally, Israel.

I will say that I think we saw maybe a slightly different tone in the meeting, but we will have to see how it goes.

(You can view the entire press conference here.)

She done good! I figured she’d be good in that role.

I’d prefer we have her channel Pacino from Scent of a Woman.

When it comes to the UN, it’s time to speak loud and USE both a big stick and a pointy stick.

Double points if she work the words “wrecking ball” into any reference on future US participation in the UN. Also instant KO if she could throw a chair against a wall.

She ought to take a flamethrower to that place.

In her position as Governor and now her first major public address, as was this at the U.N., she has accomplished more than Hillary did in all the years she’s been slimming along. Should we experience more America First stars in place with this administration there would be an awesome field of strong candidates with proven track records for the opposition to rise above. Another reason to watch the left-wing continue to feed their paranoia.

It’s no wonder the MSM has got the volume up to 11 in its denigration of the Trump administration. If the doings of its appointees began hitting the news as they should be, the idea of ‘progressive’ governance would be turned to full retreat.

Excellent speech, nicely pointing out the hypocrisy of the U.N. in regards to Israel especially in recent years. Hopefully with her leading the way we can get that horrendous resolution overturned and continue to shore up support for Israel in other parts of the world.

About time. I think she needs to castigate the u.n. once a week.

The UN is a joke and needs to just die.

They are nothing more than a forum for dictators to whine about Israel and America.

The very fact that brutal, repressive dictatorships are put on equal footing with stable democracies is a joke.

‘will not turn a blind eye to this anymore.’

Not just announcing future policy, but also condemning past US administrations which DID ‘turn a blind eye to this’. (A ‘blind eye’ is a charitable reading of what happened.)

The gems gave us the most corrupt, unlikeable, incompetent candidate ever, plus carrying investigations baggage, and a demented old commie.
How on Earth can they do any better next time?