“I do believe it will involve additional forces to ensure that we can make the advise-and-assist mission more effective.” 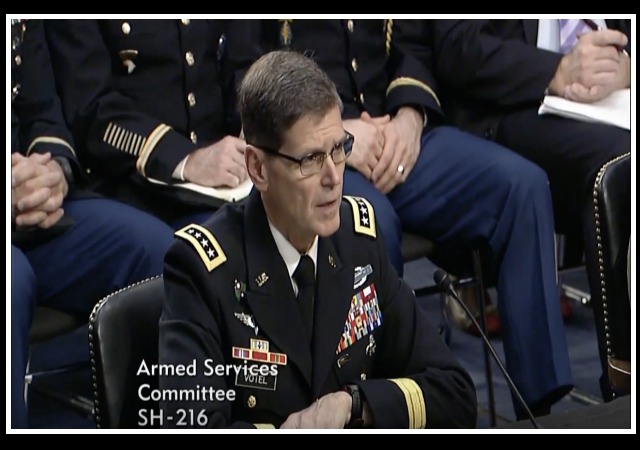 Gen. Joseph Votel, the general in charge of the U.S. Central Command, told the Senate Armed Services Committee that he needs more troops in Afghanistan to break a stalemate:

“We are developing a strategy, and we are in discussions with the secretary and the department right now,” Gen. Joseph Votel told the Senate Armed Services Committee. “I do believe it will involve additional forces to ensure that we can make the advise-and-assist mission more effective.”

Votel did not specify how many more troops America needs to send. It’s doubtful we will know until Defense Secretary James Mattis makes a final decision.

Right now America has 8,400 soldiers in Afghanistan. These troops serve “on a dual mission of training, advising and assisting Afghan forces in their fight against the Taliban and conducting counterterrorism missions against groups such as al Qaeda.”

America also has 10,000 contractors in the country to help “in logistical and maintenance roles.”

None of these people actually participate in combat, only provide support and training. Only some thousand “Americans are dedicated only to hunting terrorist targets from organizations like the Islamic State group or al-Qaida [sic].”

Votel’s testimony mirrors the one Gen John Nicholson, the top U.S. general in Afghanistan, gave the same committee last month. He acknowledged a stalemate in Afghanistan and that he has “a shortfall of a few thousand” soldiers. But it’s not necessarily to fight. Instead, he needs “troops to train and advise the Afghans.” The advisors in Afghanistan work “at the command level of army corps.” Nicholson wants more advisors “at lower levels in the chain of command, specifically Afghan brigades.”

A resurgence in al-Qaeda and Taliban and an ISIS presence in the country has put pressure on these war planners to form a new plan for “the embattled nation, but particularly in the militant group’s traditional strongholds in the country’s northern and southern regions.”

ISIS took responsibility for an attack on a hospital in Kabul, the capital, on Wednesday:

More than 30 people died Wednesday after terrorists disguised as doctors broke through the building’s gates and gunned down patients and medical staff. More than 70 others were wounded.

The strike in one of Kabul’s most secure neighborhoods set off clashes with Afghan forces that continued for hours, with some patients climbing out of the building and sheltering on window ledges.

But experts state that the Taliban and its ally the Haqqani Network remain the bigger threat:

“While disturbing, [Wednesday’s attack] should not be mistaken for the rise in ISIS,” said Theo Farrell, a professor of war and Dean of Arts and Social Sciences at the University of London.

“All the evidence suggests that [ISIS has] been contained in Kandahar,” he said, referring to a province in the east of the country. “And while there are ISIS cells in other parts of Afghanistan, the country is very hostile ground for them.”

Nicholson brought up the Taliban in his February testimony. He stressed to the committee that Russia wants to “legitimize the Taliban” in Afghanistan as a way “to undermine the United States and NATO. From The Hill:

“The Russian involvement this year has become more difficult,” Gen. John Nicholson told the Senate Armed Services Committee. “First, they have begun to publicly legitimize the Taliban. This narrative that they promote is that the Taliban are fighting Islamic State and the Afghan government is not fighting Islamic State and that therefore there could be spillover of this group into the region. This is a false narrative.”

“I believe its intent is to undermine the United States and NATO,” he later added.

Afghanistan is made up of over 200 tribes and alliances that shift like a barely set mound of jello.

You cannot occupy Afghanistan. You can pay off tribes and send down lightning bolts from you Predator drones.

Can’t defeat the enemy without attacking their refuges in Pakistan. Can’t enter Pakistan because our supply lines go thru it.

Maybe finding a way to destroy the economies of the village refuges in Pakistan. Night time spraying of herbicides around the villages?

Look, I’m an old Marine who fought in Vietnam. I can tell you the heartbreak of losing one single American for that cesspool. Afghanistan is 100 times worse! No single entity will ever control it unless they start with a neutron bomb. As long as the tribes are in power there is no way to ever get them to agree for more than a few days on anything. Stop this madness and get the hell out! Let the Taliban have it. If it gets bad enough then the locals will rise up.

Vietnam is the main reason LBJ is the 2nd worst president ever. He sent our men to fight and die while preventing them from even attempting to win. He did this solely to for his personal political benefit. Fifty thousand of our men died and his war disaffected an entire generation who voted our worst president ever into office.

We could have won in Vietnam easily if we had just tried.

Can’t we just turn the place into rubble and be done with it?

All we have to do is stay the hell out and they’ll turn the place into rubble for us. They’re already most of the way there.

To commit or not to commit. That is the question.

If Trump is as smart as he claims, he will walk away from this bottomless pit. If his generals cannot give him an end game then get out. There is no such thing as an enforced peace!

The only reason to stay in Afghanistan after we knew that OBL was no longer in that country [late 2003] was to put military pressure on Iran. However, as the logistics of supplying US troops in Afghanistan was a nightmare, this was never a significant threat to Iran. The US should have been out of the country by the beginning of 2005. That we are still there, in any strength is ridiculous and should be ended yesterday. Afghanistan has NO strategic or even tactical value for the US.

But, but, but…what about the drug trade? Will we have to increase funding for the CIA to offset their losses?