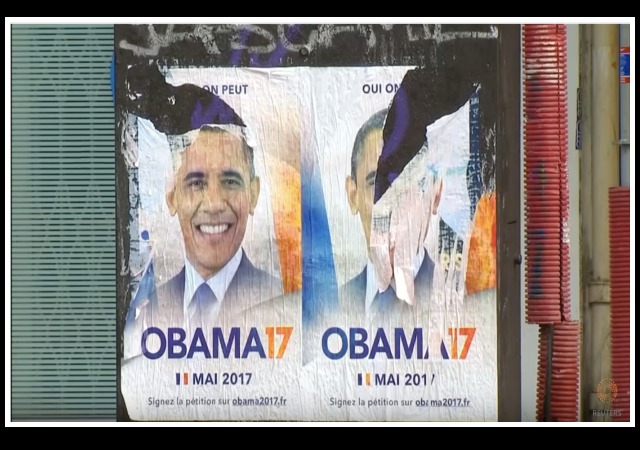 Some in France would love if former President Barack Obama ran for president. Again. But this time in France. Obama is ineligible since he’s a US citizens, but that’s not stopping these people.

42,000 French citizens have signed a petition to persuade him to run for president.

“We think we can do something else than the extreme,” said one of the organisers, who refuse to reveal their names, saying they want the focus to remain on the campaign and not on them as individuals.

“We are anti-political, we are not against any candidate in particular, but we are not a big fan of any of them. [This campaign is] a way to say ‘Guys, eh wake up – you are uncool, and this campaign is uncool – we’d rather have Obama’.”

But people have become disappointed with them since “Fillon has stumbled on allegations of fake taxpayer-funded jobs for his wife and children – particularly damaging for someone pledging to slash public spending.”

Le Pen faces financial allegations as well, but it’s her nationalist views are “racist and dangerous.”

Our goal is simple, to collect before the 15th of March, 1 million voting promises to convince Barack Obama to run for the presidential election of May 2017.

– Barack Obama has the best resume in the world for the job.

– Because it is still possible to vote for a President and not against a candidate.

– Because at a time when France is about to vote massively for the extreme right, we can still give a lesson of democracy to the planet by electing a French President, a foreigner.

.@BarackObama did you know, you now represent a big hope here in France ? #Obama17 pic.twitter.com/36vGsIRKhC

Translation: This morning in Paris.

Because, apparently, in France the most important qualifications for the presidency is to “be cool.”

I took this as the French themselves saying that they couldn’t name a single frenchman who they thought was worthy of being President.

I find that position hard to criticize, since I agree with them.

‘French President Obama’ would be one of history’s greatest hilarities. Talk about deserving each other!

I could get 42,000 Americans to sign that petition in about 5 minutes.

I am actually good with Barack running at President of France.

Please let this happen. As president of France he’d be limited on what he could say and especially in what he could do towards destroying America as we’ve known it.

Don’t run till you see the whites of their eyes.

Can we please have a legal analysis of the recent railroading of Le Pen?

I’m good with it as long as the French promise they won’t try and send him back.

I just signed it. I saw nothing that said it was restricted to French citizens only.

Why not, the French loved Jerry Louis.