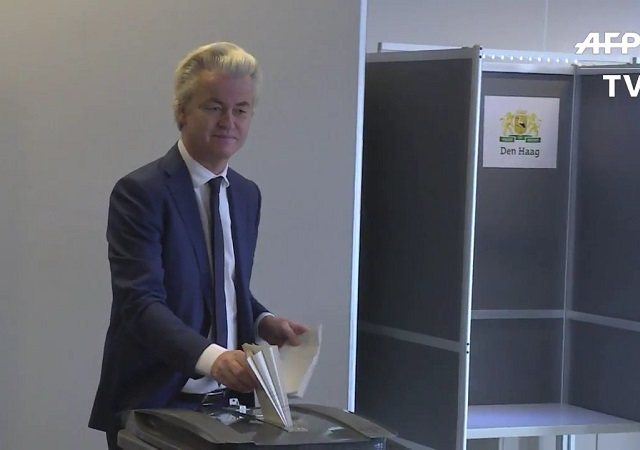 With 95 percent of votes counted, PM Rutte’s VVD won 33 seats in the 150-place legislature, down from 41 at the last vote in 2012. Wilders came second with 20 seats, Reuters news agency reports.

Wilders thanked over a million Dutch citizens who voted for his party , tweeting, “12 years after [its] founding, PVV becomes the second [biggest] party of the Netherlands! Great!”

Dutch center-right Prime Minister Mark Rutte scored a resounding victory over anti-Islam and anti-EU Geert Wilders in an election on Wednesday, offering huge relief to other governments across Europe facing a wave of nationalism.

Rutte declared it an “evening in which the Netherlands, after Brexit, after the American elections, said ‘stop’ to the wrong kind of populism.” (…)

With around 95 percent of votes counted, Rutte’s VVD Party won 33 of parliament’s 150 seats, down from 41 at the last vote in 2012. Wilders was second with 20, the CDA and centrist Democrats 66 tied for third with 19 each, data provided by the ANP news agency showed.

At 78 percent, turnout was the highest in a decade in an election that was a test of whether the Dutch wanted to end decades of liberalism and choose a nationalist, anti-immigrant path by voting for Wilders and his promise to “de-Islamicise” the Netherlands and quit the European Union.

Wilders campaigned on the promises of de-Islamising the Netherlands and taking the country out of the European Union. With his slogan “The Netherlands is ours again” Wilders had vowed to take back control from the unelected E.U.-bureaucrats.

Around 13 million Dutch citizens were eligible to vote in Wednesday’s election and nearly 80-85 percent of them turned out to cast their ballots according to some estimates. With 28 other parities in the fray and no clear winner, negotiations could take months before the new governing coalition emerges.

Other parties have rejected the idea of sharing power with Wilders-led PVV. Out of total 150 seats in the Dutch Parliament, 76 seats are required to form a majority government.

On his campaign trail, Wilders vowed to take the Netherlands out of the E.U., promising a Brexit-style referendum upon assuming the Prime Minister’s office. The Netherlands is one of six core state that created the European Economic Community (ECC) — the predecessor of the E.U. — some 50 years ago. The Netherlands’ exit from the E.U, or Nexit, would have undoubtedly spelled doom for the Franco-German “European Project”.

After leading the polls since November 2016, Wilders numbers started to drop when he was forced to abruptly suspend his campaign following a major security breach late February. A Moroccan-Dutch police officer working on his security detail was arrested for allegedly passing on Wilders’ movements to criminal gangs. Europe’s leading critic of Islam, Wilders has survived attempts on his life by Islamists and has been living under around-the-clock police protection for nearly 13 years.

Regardless of the outcome of the Dutch elections, the E.U.’s troubles are far from over.

In France, Marine Le Pen of Front National is offering a stiff challenge to establishment parties. The first round of the two-stage presidential election is set to take place next month, followed by a possible second round in May.

Germany’s anti-establishment Alternative for Germany (AfD) might be trailing in the third place with Chancellor Angela Merkel and her Social-Democratic rival Martin Schulz running neck and neck for the top spot. But with both Merkel and Schulz committed to uncontrolled mass-immigration, the AfD Party could win enough undecided voters to challenge the frontrunners ahead of the September election. Seven months can be a long time in an electoral cycle.

Liberal media may be ecstatic at this “blow to populism”, but nothing can take away from the fact that Geert Wilders created an entire political movement to fight the rise of Islamism in Europe, despite a sustained campaign of smear and intimidation from the European ruling class and the establishment media. He has been dragged to courts by liberals and received death threats from the Islamists — for daring to speak the truth about political Islam.

Whatever the outcome of this election may be, Geert Wilders and Dutch Freedom Party (PVV) are here to stay.

Funny how Reuters describes this – a “resounding victory”??? It’s total fragmentation, and the Dutch may end up with a weak minority government as a result. In terms of the ruling coalition, Rutte lost 8 seats, and the Dutch Labour Party collapsed completely.

Holland’s new parliament is going to have 13 parties, none with more than 20% of the vote. That doesn’t sound like anyone can call that a “resounding victory”.

Wilder’s party increased by several seats. The muslim population is continuing to grow and continuing to increase its militancy. Edrogan wants his government’s officer to campaign for him in the Netherlands, which has caused riots in Rotterdam. Each year as the situation degrades, more Dutch will vote Wilders. The only question is, will enough of them vote for him in time to avoid civilizational collapse and the imposition of sharia in the Netherlands.

I should also add, that I was shocked that the Green Left (Groen Links) party more than doubled the number of seats they have from 4 to about 14 as I recall. They are in favor of immigration!!!!

Why the shock? Where else were Labour’s supporters going to go?

Another way to look at it, Wilder’s Freedom Party (PVV) gained influence/seats while the PM’s party lost influence/seats. Moreover Wilder’s party now has one of the largest amounts of seats within their legislature so while I don’t know much about how their procedures work Wilder’s party having that many votes means that they can’t be completely ignored by whatever ruling coalition forms within the next few months. It’s the right kind of progress even if Wilders didn’t win the ultimate prize.

No one ever wins the “ultimate prize” in the Netherlands, because they allow so many parties, they ALWAYS have to form a coalition to form a government.

76 seats are required to win the ultimate prize. Rutte’s party got 32 or 33 seats, so he has to have 2 or 3 other parties agree to govern with him to do so. He will probably form one with the Christian Democrats and Groen Links, and has refused to use Wilder’s PVV party for a coalition partner.

Here is THE BEST explanation of what happened I have found thus far:

Of course they can ignore him. He only has one sixth of the seats, which means five sixths are against him. If Rutte manages to put together a majority without VVD’s 20 members he will have no need to take any account of them. and putting together that majority will be easier when he can tell every negotiating partner “Well, if you don’t help me form a majority then I might have no choice but to go to Wilders; neither of us wants that, so let’s make a deal”.

Yes, of course he can ignore him NOW. Next election, disbelieve it will be possible. By the next election, the muslims will be making so many problems, more voters will be suffering from them and will be looking for a solution to the problem.

The time is unfortunately coming, because it is irreversible under current “leadership.”

Unfortunately, we here in the US are approaching the multiparty system whether we acknowledge it or not. The Dems are the most cohesive of the four parties, although there is a split between the Sanders socialist and the left’s progressives, that we now have, but following closely behind are the RINOs, who seem to be conflicted as to what a Republican believes. Then we have the Independents who have no structure but seem to always vote toward the middle on any issue. And finally, we have the Freedom Caucus that upholds the pure conservative position. Although our system is set up as a two party system, it is becoming apparent that it may be on the verge of failing. Compromise is a lost word and “The People” now means the elected members of Congress. If you have kept up with the latest on the health care fight you will have noticed that all, both sides, caution is to get re-elected. There is no invitation to working together or making the whole debate public. The Republican leaders have done all of it behind closed doors and have moved so far from “Repeal and replace” that it is unrecognizable. If there was ever an example of the need for term limits, it is now. It is easy to laugh at the Danes but we are not that much different.

Th main thing is that Wilders has broken through with te concept that Islam is a problem. The reality that Islam is a problem won’t be ignored so that eventually the left will have to abandon their radical immigration policies or inherit the blame for Muslims in their country. There is no going back to “The good old days” when we pretended allowing orthodox Muslims to freely come to Western cultures doesn’t present a problem.

Gene Wilder’s brother, I would assume?

The Dutch have a complicated multi-party parliamentary Democracy that defies easy description. Still, the headline that I saw in many places “Wilders’ party defeated” was really grasping at straws when his party picked up five seats. And meanwhile their equivalent of the Labor party was absolutely crushed.