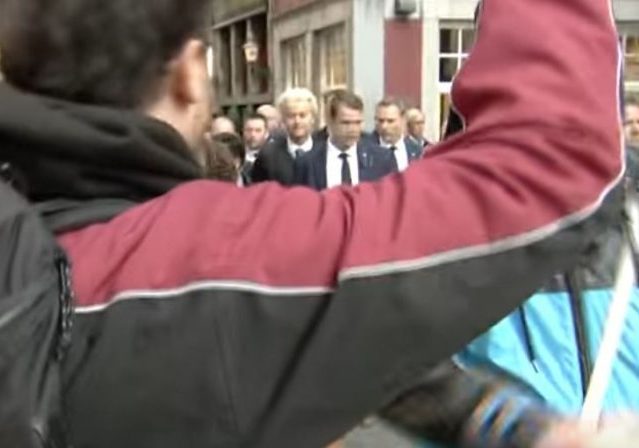 With less than 3 weeks before Dutch Election, Frontrunner Geert Wilders has suspended his campaign after a major security breach.

A Moroccan-origin Dutch police officer working on Wilders security detail was arrested for passing on his movements to Moroccan criminal gangs. Wilders, campaigning on the promises of de-Islamising the Netherlands and taking the country out of the European Union, is leading in polls ahead of the election.

Wilders’ Dutch Freedom Party (PVV) is expected to come out as the single largest party in March election and set to play a key role in the formation of the next government. Following Wilders-led PVV’s strong showing in the polls many commentators have started taking the 53 year-old Dutch politician as a serious contender for the post of Prime Minister.

The revelations raise some serious questions about Wilders’ safety. It is unclear why Dutch security officials would assign a Moroccan-Muslim agent to Wilders, given the long-standing hostility between the Dutch politician and the Moroccan-Islamic community. The security breach was regarded so serious that both Dutch Prime Minister Mark Rutte and Justice Minister Stef Blok met with Wilders on Wednesday, in what has been described by the media as “highly unusual, unscheduled, face-to-face meeting”. However, the suspected mole was allowed to walk free.

Wilders has raised the issue of inadequate security before. In 2010, his personal protection team repeatedly failed security tests in which subjects were able to smuggle firearms to his office located inside the Dutch Parliament.

A Dutch secret service agent who was part of the team responsible for protecting Geert Wilders, the frontrunner in next month’s election, has been suspended on suspicion of leaking details to a criminal organization, the secret service said on Wednesday. […]

Dutch newspapers De Telegraaf and NRC Handelsblad and the country’s national broadcaster NOS identified the suspect as an experienced officer in his mid-30s, using his first name and last initial.

Secret Service chief Erik Akerboom said he could not confirm the man’s identity but confirmed media reports he has a “Moroccan background”. […]

The agent who was suspended was one of a team tasked with prescreening locations where Wilders is scheduled to make public appearances. He was not a member of Wilders’ physical protection team, Akerboom said.

Europe’s leading critic of Islam and founder of Dutch Freedom Party (PVV), Wilders has already survived attempts on his life and has been living under around-the-clock police protection since 2004, same year when the Dutch film maker Theo van Gogh was stabbed to death by a Moroccan-origin Islamist in Amsterdam. Theo van Gogh had angered many Muslims by making a 10-minute film on violence against women in Islamic societies.

Organised crime in Europe is playing ever greater role in Jihadi terrorist activities. There now seems to be a seamless transition from being a mafia operative to being a terrorist in the cause of political Islam. Terrorist groups such as ISIS and Hamas are making big money trafficking illegal migrants into Europe.

Paris suicide bomber who blew himself up outside a café in November 2015 in the name of his faith, also ran a drug den. The Tunisian terrorist who ploughed a lorry packed with 25 tons of steel into a crowded in a Berlin Christmas Market also had a long criminal record.

Blind-folded by political correctness mandated by governments and politicians, Europe’s security forces are not being trained to see the true nature of Jihad being waged on their soil.

Geert Wilders is the face of Europe’s democratic uprising against the Islamist onslaught. This also makes him the prime target of Islamists who see Europe as their next major battle ground outside the Muslim world.

The Police deliberately worked to make the point that Arab policemen were just as trustworthy as everyone else. In this case, they were wrong. And, it is likely that Wilder’s life was in serious jeopardy. Political Correctness almost got this man killed which would have had a catastrophic impact on the Dutch elections.

It’s happened before in the Netherlands:

“There now seems to be a seamless transition from being a mafia operative to being a terrorist in the cause of political Islam.”

There really is such a thing as the Mafia, so it is too broad to use it as a term for all organized crime. The actual Mafia is very Catholic, especially in Europe.

The broader story is quite a bombshell!

There is a big-M Mafia (or rather several Mafias, e.g. Sicilian, Calabrian), but the name has come into English and many other languages, with a little m, as a generic term for all such organisations. Thus we have the Russian, Ukranian, and Israeli mafias, none of which are Catholic. The Yakuza and the Tongs are also correctly described in English as small-m mafias.

I’m sure the officer was just telling the Moroccan criminal gang what a nice infidel guy Geert Wilders is!

“It is unclear why Dutch security officials would assign a Moroccan-Muslim agent to Wilders, given the long-standing hostility between the Dutch politician and the Moroccan-Islamic community.”

If obama was still in office here, he would have done the same thing with Wilder’s security detail. This is the way liberals think. To them, it shows that we can all get along and that we are just one big happy family! This is why our national security is in the tank and why we are not trusted by any nation of Earth.

Another slant: Maybe the powers that be who assigned this man to the security detail wanted Wilders to be assassinated.

The only possible positive conclusion of this dangerous story is that *Someone* high up in Dutch security must sympathize with Wilders, because they exposed and arrested this man. And whoever that person is, they probably are aware of the elements in Dutch Security who are in on the plotting to have Wilders assassinated.

This wasn’t just a “mafia” operation – this came from inside the Security Services, there is a faction there that now wants to see him dead, just as there are some that support him.

Just like here, the situation is much closer to a widespread outbreak of civil violence than anyone will openly acknowledge.

Indeed, sounds like the still-unnamed security officer was the spy within the Wilders campaign who would know the schedule, know the appearances, and know when the hit was coming.

My only surprise in all of this is that Wilders is still alive — with his party leading in the polls, I honestly figured someone was going to take a shot at him. And, of course, who would shoot him down — the jihadis or the establishment.

That he suspends his campaign because of Muslims following their Islam cult,

The incident should give him even more seats in the Dutch parliament.

Well, glad this guy was outed before real harm could be done to Mr. Wilders! This should hopefully be just a short hiccup in his campaign and he’ll be back out there again, with another valid point in his arguments about the dangers of mass islamic migration!

Just to clarify, Mr. Wilders has only temporarily suspended his campaign, correct? This cannot be a permanent suspension, I would hope.

Vijeta Uniyal, Is there any hint from Wilder’s office if he will re-start his campaign before the election?