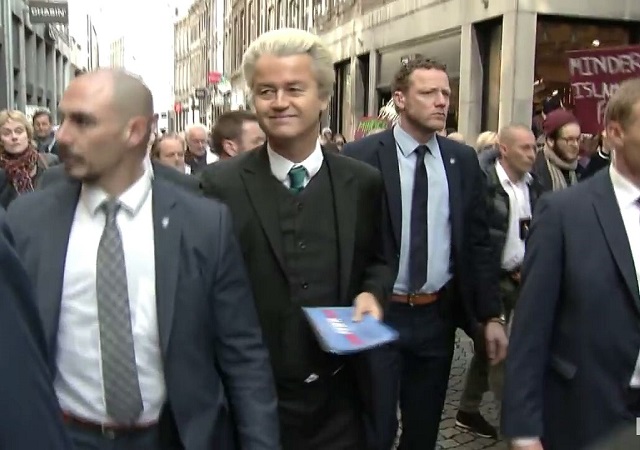 With less than 2 weeks until Dutch election, the government has assigned special forces of the Dutch military to protect the frontrunner Geert Wilders, European newspapers report.

Europe’s most prominent critic of Islam and leader of the Dutch Freedom Party (PVV), Wilder had suspended his public campaign last week after a police officer serving in his security detail was arrested for leaking details about his movements to Moroccan-Muslim criminal organisation.

With promises of ‘de-Islamising’ the Netherlands and taking the country out of the European Union, Wilders has been leading the polls ahead of the March 15 election. The result of the election in the Netherlands is bound to set the tone for the two major elections coming up in Europe later this year: the France presidential election in April-May and the German parliamentary election in September.

Dutch Government’s move, to transfer Wilders’ security over to the country’s military, points to the lack of faith in country’s law enforcement to protect the life of PVV leader who has been on the crosshairs of international Jihadi groups for more than a decade.

Authorities in the Netherlands still need to answer some serious questions surrounding the Moroccan-Muslim mole found in Wilders’ security detail.

Firstly, why did the Dutch Police assign a Muslim police officer of Moroccan descent to Wilders’ security detail, especially in the light of growing hostilities towards the politician within the Moroccan-Muslim population? Secondly, if the threat to Wilders’ life is so imminent that the government had to call in the military, why then was the suspected police-mole allowed to walk free after questioning?

The 53-year-old, who is currently riding high in the opinion polls, had been forced to cancel all public events after revelations of leaks from the police team guarding him.

The Dutch Party for Freedom (PVV) leader had been living under 24-hour police protection since an Islamist militant’s 2004 murder of fellow Islam critic Theo van Gogh.

But the Special Security Assignments Brigade (SAB), which is normally in charge of guarding embassies in countries such as Afghanistan and Iraq, has been called in to help protect the hardline politician.

In December, a Dutch court found Wilders guilty of hate speech for merely asking Dutch voter: “Do you want more or fewer Moroccans?” — during the 2014 election campaign.

PVV has emerged as a nationwide party since its founding in 2006, however Wilders is the face and the main campaigner for the party. His absence from the campaign is adversely affecting PVV’s performance. In some polls, PVV has slipped to the second place, behind the conservative VVD of Prime Minister Mark Rutte, for the first time since November.

With European political establishment united against Wilders and the European mainstream media portraying him as an intolerant hatemonger for daring to speaking up against the political Islam, the Dutch politician remain the lone voice of sanity in today’s European political stage.

It’s a good thing for Geert that at least the military appears to support him. There’s no question about why the Moroccan was assigned to Geert’s security detail – some very well place people in the current Dutch government want Geert dead, and were hoping to arrange an assassination by proxy.

No. Much more likely that they told themselves that barring a Muslim from the detail would be racist. They probably even congratulated themselves on being more inclusive than Wilders himself would be.

Never ascribe to malice what could be ordinary self-important liberalism (But never rule out malice in the case of liberals, either).

Judging by Wilders’ history of problems with the Dutch government over the years, that possibility has to be considered. When his life was first threatened by Islamic Supremacists and requested police protection the government’s reaction was to advise him to stop speaking in public!

I wonder what gives anyone confidence that the military is immunized against similar infiltration.

The American military is around 80% pro-native. Perhaps the Dutch military has a similar distribution and orientation.

I believe that should be 80% anti-illegal-immigrant … with the sentiment being closer to 90%.

“In some polls, PVV has slipped to the second place…”

bit of a mystery why anyone even reads the independent’s polls still, they haven’t correctly predicted a vote outcome in several years now.

if you want to know who’s going to lose, look at who the indy predicts will win.