Charity. How does it work? 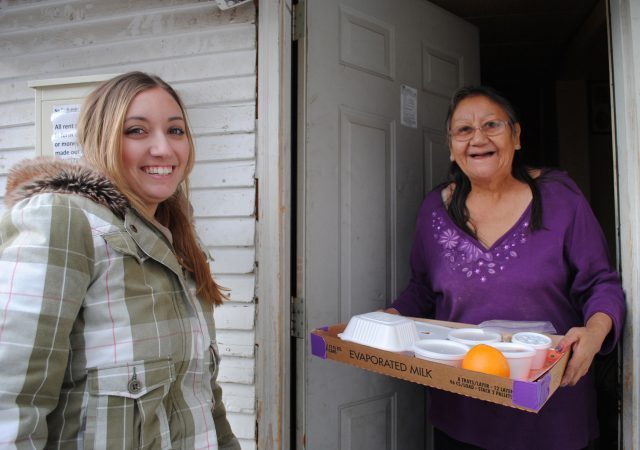 One of the programs on the chopping block is Meals on Wheels by way of a Community Development Block Grant.

Despite numerous reports to the contrary, Meals on Wheels is not wholly federally funded:

Meals on Wheels, a program that supports the delivery of meals to seniors who cannot afford food or cannot prepare it, started in Australia and has been in the United States since 1954. The program serves 2.4 million seniors every year and does get funding from the Community Development Block Grant program.

But the situation is complicated and saying that the budget eliminates the Meals on Wheels program is factually incorrect. According to the Meals on Wheels annual IRS filing for 2015 (it isn’t a government program), approximately 3.3% of its funding comes from government sources. Most is from corporate and foundation grants, with individual contributions the second-largest source. Government grants are actually the fifth-largest source of revenue.

If its portions of block grants were eliminated, the program wouldn’t suddenly disappear. However, the organization says that it already cannot keep up with growing demand from seniors who need help. In addition, Meals on Wheels passes funding down to 5,000 local groups that provide food, and they additionally might be affected by the funding cut.

The nationwide Meals on Wheels network, comprised of 5,000, local, community-based programs, receives 35% of its total funding for the provision of congregate and home-delivered meals from the federal government through the Older Americans Act, administered by the U. S. Department of Health and Human Services, Administration for Community Living. Other federal funding sources that support Meals on Wheels program operations may include the Community Development Block Grant, Community Services Block Grant or the Social Services Block Grant. In addition, programs rely on contributions from state or local governments, private donations and other resources to cover the rest, demonstrating one of the best examples of a successful public-private partnership. Meals on Wheels America, the largest and oldest national organization representing senior nutrition programs across the country, receives only 3% of its funding from the government, specifically to run the National Research Center on Nutrition and Aging.

Without federal funding, the program would need to compensate with private donations…which is exactly what’s happening.

According to Meals on Wheels’ VP of Communications, the organization received ” 50 times the normal amount of donations” and a 500% increase in volunteers:

Donations and volunteer sign-ups to Meals on Wheels surged, the group said, in the hours after President Trump’s administration on Thursday pointed to the public-private partnership as an example of government spending it can no longer defend.

“We received 50 times the normal amount of donations yesterday,” said Jenny Bertolette, vice president of communications at Meals on Wheels. These were donations to the national group, Meals on Wheels America. “Local programs fundraise individually and we can assume that there was likely a groundswell of local support, as well,” she said.

The popular meals program for the homebound elderly serves 2.4 million seniors a year, including half a million veterans in need of food assistance and home visits.

Who would’ve imagined that private citizens might step in to help in the absence of government?

Somebody should have done this years ago.

All one has to do is get the bureaucracy out of the way, and America can function again.

Heard one idiot say NEA should keep money because they have anti-drug programs for kids. Do they also feed seniors and give free mammograms?

Also note that Meals on Wheels is not FREE to our seniors! The suggested contribution is $5 per meal. Some states, including the one that I live in, provide food stamp benefits to seniors as cash grants specifically so that they can pay for Meals on Wheels.

My wife and I occasionally do our own MoW for church members or others who have a need. Simply cook up more than we need and deliver it to the individual or family. No one pays a thing. We’d do it more if we received more info about folks who need a bit of help.

Charity is redistribution by choice, that cuts out the government (e.g. single-payer) and welfare industry.

I recall seeing a study back in the ’80s that went over a centuries’ worth of records and found a significant negative correlation between tax rates and charity given. When taxes go down giving goes up, and vice versa.

The authors wrote that it’s not just that lower taxes mean people have more money, because the same pattern was seen even among lower-income people who wouldn’t be as affected by taxes themselves. Rather, they wrote, it seems that when taxes, and therefore presumably also welfare spending, are low people assume it’s their responsibility to look after the poor. But when taxes are high people perceive that it’s the government’s job to look after the poor, so why should they do it? They “already gave at the office”, so to speak.

This should never have been a federal issue to begin with. Move this virtue signaling crap back to the states and let them decide if they want to fund it or leave it up to charity.

Thanks for debunking the democrat talking points, Kemberlee.

I am kind of going with keeping this program. 3% is not an awful lot and it’s a wonderful program that does great work for our Berterans and elderly.
I think it’s a horrible PR issue. People love it and support it and it’s non political.

There are plenty of worthwhile efforts out there but it’s not the proper function of the federal government to fund them. As others have pointed out, charities should be doing these things. You don’t want to deny people the good feeling they get from helping those in need, do you?

The wife & I deliver every Monday for MOW here in Northeast KY. The folks who run tell us their operating expenses are covered by corporate, church, & individual donations, both food & $$$. No federal funds whatsoever.

They do have the occasional fund raiser and the community always responds & helps them stay open. It’s been in existence here since 2005 & hasn’t shut the doors yet.

I wonder why the very real problems with accountability and effectiveness in the Community Development Block Grants wouldn’t also effect other block grant proposals, such as Speaker Ryan’s desired Medicaid Block grants?

Money taken from me by government and their implicit threat of violence if non-compliant with their demands should never be confused with charity.