“We are going to do more with less.” 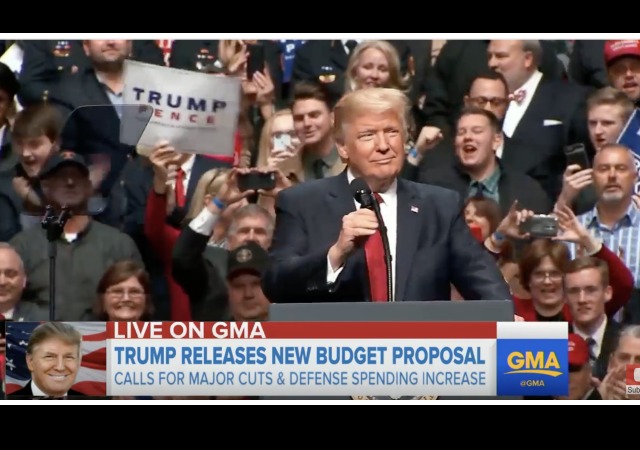 President Donald Trump released his plan for the 2018 federal budget titled “America First: A Budget Blueprint to Make America Great Again.” The plan includes cuts to some departments and slashes programs in order to reallocate funds to a bigger defense budget.

“One of the most important ways the Federal Government sets priorities is through the Budget of the United States,” wrote Trump. “Accordingly, I submit to the Congress this Budget Blueprint to reprioritize Federal spending so that it advances the safety and security of the American people.”

Trump said the military needs the proper tools “to deter war, and when called upon to fight, do only one thing: Win.”

The proposal promised no additions to our already overblown debt. To do this, he made cuts across the board “to do more with less, and make the Government lean and accountable to the people.”

Here’s an overview on some of the more significant parts of the budget.

Quick question: Why don’t these millionaires and billionaires fund these programs then?

Other agencies include the Corporation for Public Broadcasting, which helps fund PBS and NPR. Politico immediately brought up Big Bird and Sesame Street, but HBO already picked up the show. Episodes still run on PBS.

Again, if it’s so sacred, then why can’t the elite Hollywood people pay for it?

As Trump noted, defense has been his pet project before he won the nomination and the presidency. This means more money for defense. He laid out his plans for the Pentagon, who would receive a $639 billion budget. That’s an increase of $52 billion from 2017:

Those on The Hill have already reacted to the budget. Here are a few initial reactions:

House Speaker Paul Ryan, R-Wis., said the budget was a shift in the right direction after eight years of Democratic blueprints from the White House.

“We are determined to work with the administration to shrink the size of government, grow our economy, secure our borders, and ensure our troops have the tools necessary to complete their missions,” Ryan said.

“The very programs that most help the middle class are those that get clobbered the hardest: investments in infrastructure, education, scientific research that leads to cures for diseases all take big hits” Schumer said. “Democrats in Congress will emphatically oppose these cuts.”

Sen. John McCain said the “budget proposed today cannot pass the Senate” because the increase in defense does not go far enough.

McCain – “more for war and for more wars”. What an idiot, what a closing comment.

I trust Trump not to piss away the defense spending badly as McCain surely would.

Trump has already negotiated better prices on the F-35 and the new Air Force 1. He has literally saved billions.

I cannot wait to see what he does with the Navy’s ship builders.

Try to take out an enemy stronghold with a NPR broadcast.

Just attempt to listen to a broadcast and you might change your mind.

I’m so pleased that Trump wants to end the “Energy Star” program. I had to spend $700 on a new sine-wave UPS for my computer because the “Energy Star” power supply in my computer wouldn’t work with the traditional square wave units. Another thing that irked me was the GFCIs which the electrical code requires in kitchens, baths, garages, and outdoors. The old ones had indicating lights that were illuminated when the unit was functioning. The EPA made the manufacturers change that protocol to lights that only came on when the unit was tripped. So now I have half my house with lights that are normally on and the other half with lights that are off. It’s absurd! The EPA thinks that burning 5mA on a LED is going to break the electrical grid or something. Then there are front-loading washing machines which require us old folks to get down on our hands and knees to load. We hate that. The list goes on and on…

Yep Energy star, when appropriate, is now a consumer driven phenomenon for most appliances. Why wouldn’t you want a dishwasher, refrigator, washer, or dryer that lowers your monthly power bills? It’s self-incentivized for the consumer.

I had fun listening to opponents list the possible consequences of these budget cuts – it sounded so much like a teenager creating their first budget, i.e. plenty of money for non-essentials and nothing left over for food, housing, transportation, etc.

Did anyone notice the budget did not cut Interest Expense?
BECAUSE THEY CAN’T.
So we need a math quiz. Multiply 20 trillion by 5% and compare you result with income taxes collected.

Actually, I’d prefer that he do less with less.

A LOT of my old shipmates would sign-on for that in a hummingbird’s heartbeat! After a few pirate vessels were found adrift, shot to doll rags with all hands dead, it might just help some of those SOBs decide to go into another line of work. At the very least it would cut repeat piracy attempts significantly!