“not the place people imagine it to be” 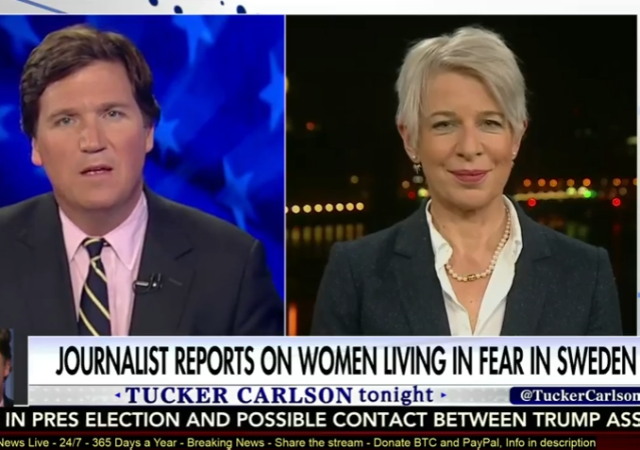 Professor Jacobson has written about what’s happening in Sweden many times over the years. He recently wrote a detailed post about the liberal narrative vs. the reality in which he concluded Malmo was the warning.

Last night on the Tucker Carlson show, Daily Mail reporter Katie Hopkins described a recent visit to Sweden which confirmed that many women live in fear.

Here’s an excerpt of her recent article in the Daily Mail:

Where females fear to tread: KATIE HOPKINS reports from Sweden, the Scandi-lib paradise where terrified women have vanished from the streets and a conspiracy of silence and self-censorship on immigration buries the truth

I didn’t come to Sweden for the riots. Or because of Trump. In fact, I was supposed to be here in December — before airline strikes stood in my way.

I came because I was asked. Repeatedly.

Swedish women reaching out by email, by letter, to quietly show me what has become of their country.

Dads writing that they were worried for their daughters, tweeting that Sweden is not the place people imagine it to be, that young girls are scared to go out at night.

A news feed filled with reports of the rape and assault of Sweden’s young women, some inexplicably streamed live on Facebook by the gang as they attacked.

Other reports filed quietly away in a box marked unmentionable: the rape of a 12-year-old unaccompanied immigrant by a so called fellow ‘unaccompanied minor’ immigrant who later bragged he was 45.

When Trump turned the world’s attention to Sweden by clumsily referring to the effects of mass-migration on what used to be seen as the most liberal country on earth, the country was ready and waiting to blow.

He provided the touch-paper to the explosive mixture of thousands of bored young migrants who were born into fighting and have brought the battle with them.

While liberals countered with accusations of fake news, the right highlighted the chaos caused in this town where 90% of Rinkeby residents are foreign.

To make matters worse, Hopkins reports that many of the same women who live in fear of attack are afraid to speak out about it for fear of being called racists by feminists.

That’s interesting. She agrees with Robert Reich that Trump personally caused the damaging riots in Sweden?

The reporting is undoubtably accurate, but LI readers should be made aware in the article that Katie Hopkins is the British Ann Coulter & an intentionally provocative right wing flamethrower.

Nobody who knows who she is is going to be convinced.

Nobody who knows who she is is going to be convinced.

Why not, if “the reporting is undoubtably [sic.] accurate”?

The trail of tears from Tripoli to Damascus to Kiev to Stockholm.

The media & politicians have doubled down on the riots, rapes, assaults, drug trafficking and the no-go zones even as quite frequently Swedish & foreign press are assaulted/robbed when they venture into immigrant areas. It is unconscionable that the leftist continue this facade.