British Prime Minister Theresa May will activate Article 50 of the Lisbon Treaty to start the Brexit process on March 29, which will start the two year negotiations for the United Kingdom to leave the European Union. From The London Times:

Britain is keen to seek a comprehensive free-trade deal with the EU as part of the exit process. However, the European Council wants to sort out Britain’s “divorce bill” from the bloc before any future relationship is agreed. The status of EU nationals already in the UK is another issue that both sides want to deal with early on.

Article 50 of the treaty allows “any EU member the right to quit unilaterally, and outlines the procedure for doing so.” The Telegraph published this infograph: 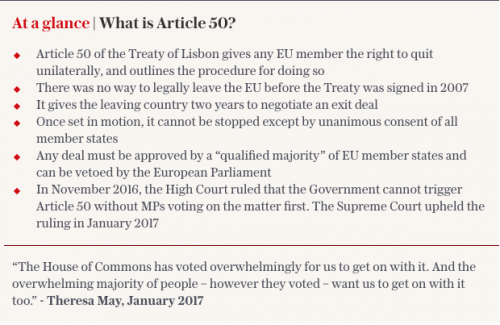 The UK voted on the referendum last June, with the majority of British nationals voting to leave the European Union. May received permission from the Parliament Houses last week to begin the negotiations.

This is the first time this has happened, which makes it hard to determine exactly what, how, or when anything associated with Brexit will happen. But if the two sides cannot agree, then the UK will leave with nothing.

Margaritis Schinas, chief spokesman for the European Commission, confirmed officials received May’s decision, but would not offer any comments. May still has to send the official letter, but also did not confirm if the letter will contain details of negotiations. But May has given a little insight into her plans:

Britain’s exit negotiations are expected to be exceptionally tricky, with the country aiming to leave Europe’s single market and customs union but hoping to retain preferential access to both through a new trade agreement.

May has signaled that she will prioritize Britain’s ability to control immigration from E.U. countries, a critical element driving pro-Brexit sentiment. European leaders have drawn a tough line, signaling that they will not allow Britain to enjoy the benefits of E.U. membership but not bear the responsibilities.

European Council President Donald Tusk hopes the EU and the UK will remain “close partners in the future.” He hopes to send his response to May’s letter by March 31.

Since May will trigger the article in late March, officials said negotiations may not start until early summer “because there is now too little time to convene the 27 other EU heads of government for a meeting in early April as Mr. Tusk had originally planned.” From The Wall Street Journal:

That meeting will be a key one since it will settle the guidelines for the talks—setting out which issues will be dealt with in the divorce negotiations and in what order. After that, the EU will need another few weeks to turn those guidelines into a formal negotiating mandate for Michel Barnier, who will lead the day-to-day talks for the bloc.

Not only that, but the Institute for Government (IG) predicts parliament may need more than 15 bills because of Brexit, meaning domestic issues may take a hit:

Dr Hannah White, the IFG’s research director, told the BBC Radio Four Today programme: “The estimates we have heard are something between ten and 15 bills required in the next two parliamentary sessions. Normally, there are about 20 in a Queen’s Speech. So, that’s roughly the capacity that there is in government to draft these bills and, in terms of parliamentary time, to pass them.

“So, that takes a big chunk out of the government’s capacity to legislate. And its other priorities, its domestic priorities, will take a hit in the next couple of sessions.

“There will have to be some really tight prioritisation in government to work out what else is going to be done aside from the Brexit legislation.”

May has also received pushback from Northern Ireland and Scotland, both of which voted to remain with the EU. Scotland’s First Minister Nicola Sturgeon announced last week that she may ask May for a second independence referendum:

Sturgeon said it was clear that the UK was heading for a “hard Brexit” to the detriment of Scotland, and that Scottish voters deserved a choice of remaining in the European Union as part of an independent nation.

Scotland attempted an independence referendum in September 2014, but 55% of the voters chose to remain with the United Kingdom. However, last summer, the majority of Scotland voted to remain, 62% to 38%.

May lashed out at Sturgeon’s announcement, countering that right “now is not the time” for Scotland to take a vote. She did not say if she will veto Sturgeon’s request.

A good source for Brexit news and commentary.

Unlike some leaders, May didn’t insist on Repeal & Replace. Good for Britain.