The UK plans to begin Brexit this month. 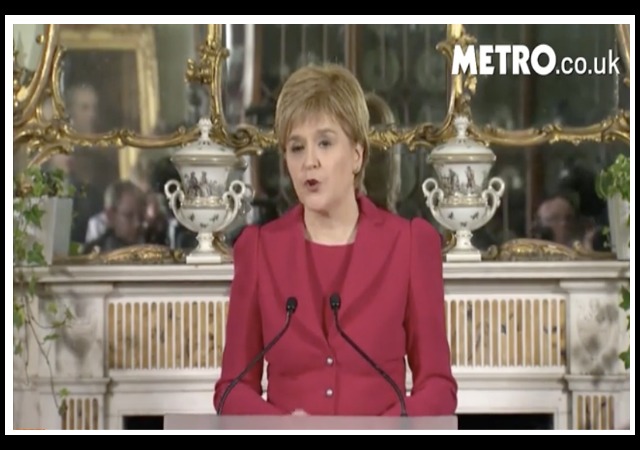 As Brexit looms around the United Kingdom, Scotland’s First Minister Nicola Sturgeon has announced she may ask for approval to have another independence referendum. From CNN:

Sturgeon said it was clear that the UK was heading for a “hard Brexit” to the detriment of Scotland, and that Scottish voters deserved a choice of remaining in the European Union as part of an independent nation.

Her announcement came as the British government prepared to fire the starting gun of leaving the European Union.

Scotland attempted an independence referendum in September 2014, but 55% of the voters chose to remain with the United Kingdom.

But they have an opportunity to change that now. The European Union Referendum last summer, known as Brexit, took everyone by surprise. The news outlets and political leaders had everyone believing that the UK would remain in the EU. However, the final vote showed otherwise as over 17 million voted to leave.

So maybe this time around the people of Scotland may change their mind:

Speaking at Bute House in Edinburgh she said: ‘In my view it is important that Scotland is able to exercise the right to choose our own future at a time when the options are clearer than they are now, but before it is too late to decide our own path.’

Ms Sturgeon said: ‘The timing of the Brexit negotiations are not within the control of the Scottish Government. However, we must plan on the basis of what we do know now and what we know is that on the timetable set out by the Prime Minister, the shape of the Brexit deal will become clear in the autumn of next year ahead of ratification votes by other EU countries.

‘That is therefore the earliest point at which a referendum would be appropriate.’

Sturgeon will ask the Scottish Parliament next week for permission “to request a Section 30 order from Westminster – required to allow a referendum to be held.” If the votes happens, Scotland will hold it between autumn of 2018 and spring of 2019.

The two parliament houses will vote on the withdrawal bill soon. If it passes, then Prime Minister Theresa May will invoke Article 50 to start the process. Once invoked, the kingdom has “a two-year window in which to hammer out a divorce deal with the other 27 EU governments.”

So let me see if Ive got this right. Last time the independence vote not only got shot down BUT got shot down in flames so of course this means that the Scottish parliament feels they have a mandate to re-litigate this all over again!

Its amazing just how detached from reality the political classes are when it comes to something THEY want.

She is disappointed that she has not been raped yet in spite of thousands of muslims in the country, so she wants even more in hopes of fulfilling her sex fantasy.

But today, the oil money is gone, production is down, new investment is over. The chance that Scotland could financially survive as an independent nation is now zip, zero, zed. This drive for a new referendum is sheer idiocy.

There is a way around that, which would be for Scotland to agree to be annexed by Ireland.

This would actually be good for the remainder of the U.K., if Scotland would leave… thereby taking the bulk of the bat shit crazy socialist / Labour types with them.

Scottish politicians are as left-wing as it gets. If Scotland becomes an independent nation there goes the British Labour Party (which would be a good thing).

Time to begin the process of renovating Hadrian’s Wall. And this time the English that were begging the Scots to stay in the first Referendum will possibly be saying good riddance.

Just to make things interesting, the Highlands have tended to be pro UK as have the Orkneys and I think the Shetlands. Which means they may want to secede from Scotland and remain with the UK. The EEZ’s around those islands make up the Scottish claim to North Sea oil.

If Scotland does try to join the EU, it will be almost surely rejected, and not on economic grounds alone. If Scotland can leave the UK and join the EU, then Catalonia and the Basque Country [in both Spain and France] will likely secede. Neither the French nor the Spanish will put up with that. Not to mention that the Flemings and Walloons who make up Belgium hate each other and want to be rid of each other [preferably fatally]. For that matter, the Lombard-led Northern League wants independence from Italy.

Scotland would be a precedent that the EU really would not want to take place.

What kind of people have the Scots become that they would trade one master (the UK) for a far worse one (the EU)? Where’s the modern day William Wallace? It breaks my heart to see how far they’ve fallen.

notamemberofanyorganizedpolicital in reply to tyates. | March 14, 2017 at 6:00 pm

Aye. And where is the modern day likes of Scottish Vicar Adam Smith – author of the Wealth of Nations?