The little yellow submarine heads to the Arctic. 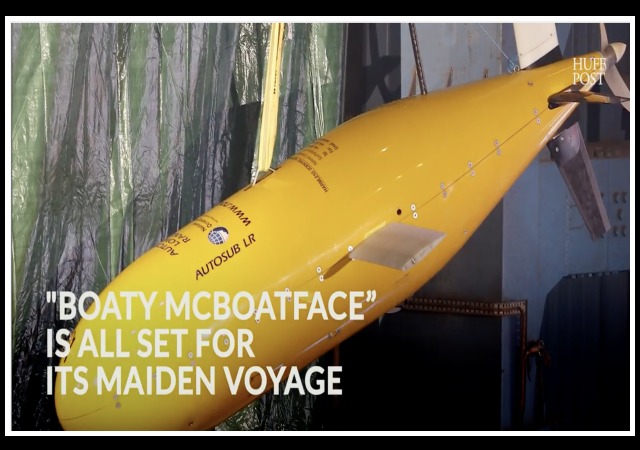 I giggle each time I say it. Boaty McBoatface, a yellow submarine, earned its name after people voted on it during an online competition.

Well, now it has set out on its first mission to the Antarctic:

Boaty, which has arguably one of the most famous names in recent maritime history, is a new type of autonomous underwater vehicle (AUV), which will be able to travel under ice, reach depths of 6,000 metres, and transmit the data it collects to researchers via a radio link.

Its mission will be to investigate water flow and turbulence in the dark depths of the Orkney Passage, a 3.5km deep region of the Southern Ocean. The data it collects will help scientists understand how the ocean is responding to global warming.

Boaty will travel with the DynOPO (Dynamics of the Orkney Passage Outflow) expedition on the British Antarctic Survey (BAS) research ship James Clark Ross, departing from Punta Arenas in Chile on 17 March.

The lead scientist Prof Alberto Naveira Garabato, from the University of Southampton, said: “The Orkney Passage is a key choke-point to the flow of abyssal waters in which we expect the mechanism linking changing winds to abyssal water warming to operate.

“We will measure how fast the streams flow, how turbulent they are, and how they respond to changes in winds over the Southern Ocean.

“Our goal is to learn enough about these convoluted processes to represent them in the models that scientists use to predict how our climate will evolve over the 21st century and beyond.”

Thanks, I needed that.

“Abyssal water warming”? Huh? Abyssal water temp is self-regulating, and all due to convection; it’s always slightly above freezing. If, for whatever reason, it gets any colder or warmer, its density decreases, its buoyancy increases, it rises, and it is no longer abyssal. And a good thing too; if water behaved any other way, the oceans would be frozen solid all the way to the bottom, with just a thin liquid layer on top where solar heating can keep it warm.

Aside from that, it’s nice to see Boaty out and about. Many moons ago I did some work on a robot sub, but nobody thought to name it. Somehow Autonomous Underwater Vehicle isn’t a name to excite the public like Boaty McBoatface.

If climate change is “settled science”, why do they need this information? After all, New York city has been 40 feet underwater for years, just as Al Gore predicted.