You hear the one about Trump using 100,000 National Guard troops to round up illegals?

You hear the one about Trump using 100,000 National Guard troops to round up illegals? 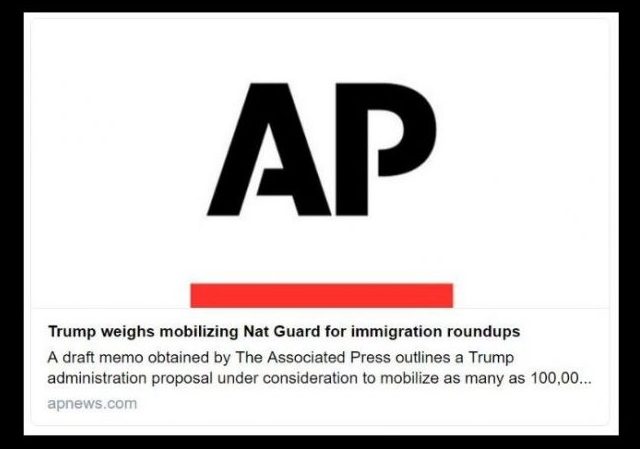 The Associated Press had screaming breaking news this morning.

According to the headline “Trump weighs mobilizing Nat Guard for immigration roundups.”

It set the internet on fire. Even though water quickly was thrown on the fire, the meme now is developed. 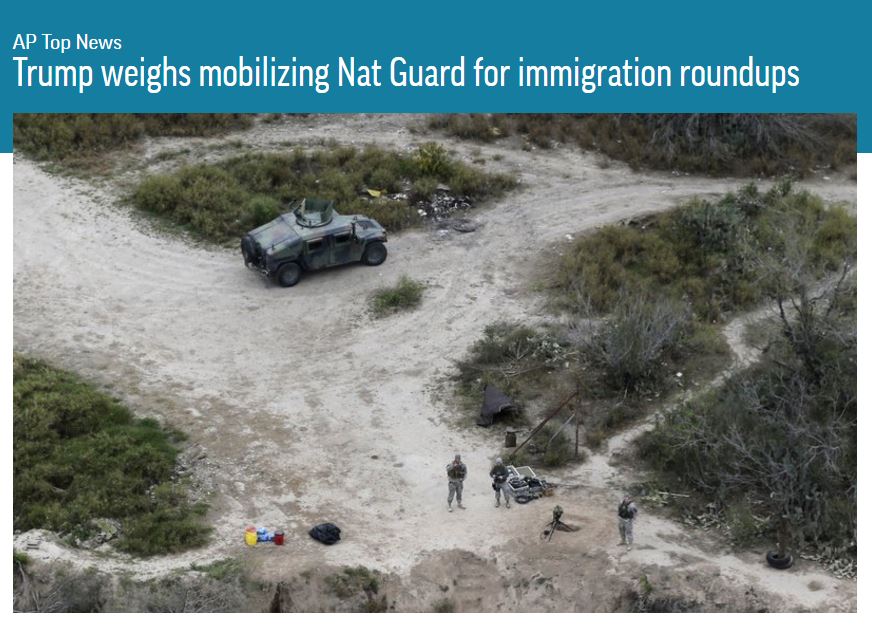 Within the body of the article is presented the consideration as being serious and as being at high levels:

The Trump administration is considering a proposal to mobilize as many as 100,000 National Guard troops to round up unauthorized immigrants, including millions living nowhere near the Mexico border, according to a draft memo obtained by The Associated Press….

While National Guard personnel have been used to assist with immigration related missions on the U.S.Mexico border before, they have never been used as broadly or as far north.

The memo is addressed to the then acting heads of U.S. Immigration and Customs Enforcement and U.S. Customs and Border Protection.

It would serve as guidance to implement the wide ranging executive order on immigration and border security that President Donald Trump signed Jan. 25. Such memos are routinely issued to supplement executive orders.

The story was published before obtaining White House or DHS comment:

Requests to the White House and the Department of Homeland Security for comment and a status report on the proposal were not answered. 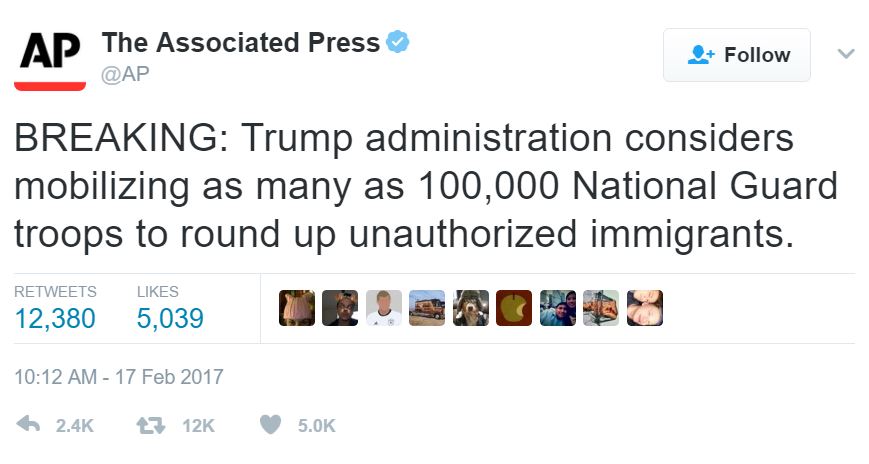 It was picked up and republished at numerous newspapers, which often just run AP stories verbatim: 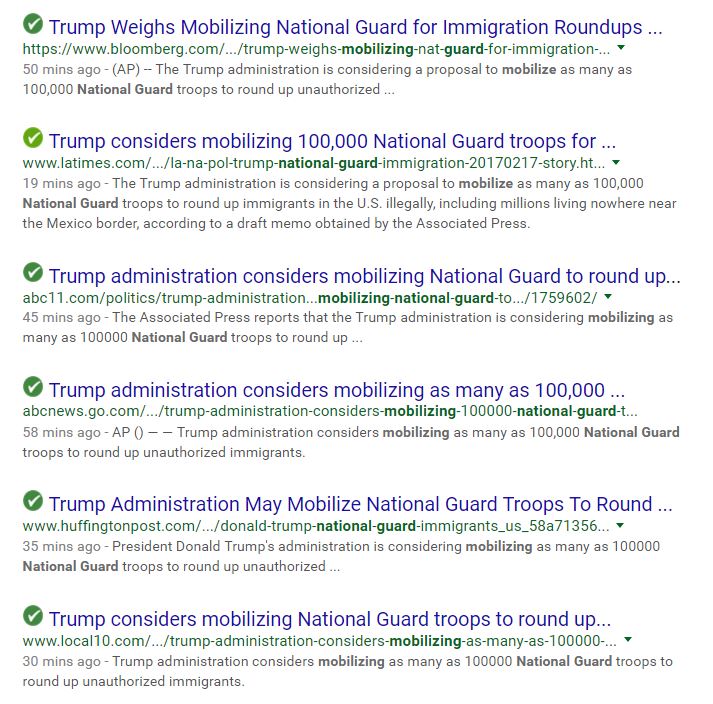 The White House and other government officials pushed back in unusually quick fashion.

What appears to have happened is that there was a very early draft of a proposal that never made it to consideration at senior levels of the bureaucracy, the DHS head, or the Trump White House.

A DHS official says memo was "a very early, pre decisional draft… and was never seriously considered by the Department"

To run a headline that Trump was considering the proposal, or even that the proposal was under consideration by the Trump administration, at best was misleading.

I have not yet seen an AP response to the denials.

But there’s a new strain emerging: This was all as set up, a way for Trump to precondition the population to such an event.

That National Guard story feels like a pure intimidation move. Whether or not it’s true doesn’t matter. Word is out. Mission accomplished.

With the added benefit of hindsight, Trump’s news conference attacks on the media yesterday were prescient.

UPDATE: AP now has released the draft memo, and it’s clear that the AP story was hyperbole at best. It appears to be nothing more than authorization to entering into cooperation agreements.

Alright, looking at a copy of the draft memo now. It never suggests nationalizing the Guard. It's an extension of 287(g). Here's it is: pic.twitter.com/Su8I8dQn6p

Also, the draft memo does not specify 100,000 NG would be mobilized. Nor that they would be "rounding up" aliens.

AP went from the pictured language to "Trump weighs mobilizing National Guard for immigration roundups" and you all fell for it. pic.twitter.com/BNl2fDBWeR

Fake news I support. There should be National Guard bases along the open stretches of the border with National Guard patrols to prevent unlawful incursions.

I wish it were true also and needs to be. Picking up 50 people a day isn’t going to do the job Trump

DT: “We were just gonna scare them with that ‘Trump weighs mobilizing Nat Guard for immigration roundups’ headline, but on second thought, a good idea is a good idea.”

Ned. But think of the children! I heard that witches [Patty & Selma] come to your house… and take your children away to eat them!

P & S. Hmm. Eat their children? Geez, we were just gonna swipe their shoes. But a good idea is a good idea.

notamemberofanyorganizedpolicital in reply to fscarn. | February 17, 2017 at 2:41 pm

Fscarn, I couldn’t help but think of this Professor Jacobson’s supplemental reading he has linked to. (Good reading – thanks Prof.)

“Transsexuals and Muslims are the Left’s new pets. (It’s kind of cute that they think the left really cares about them, and isn’t just exploiting them for virtue signaling and political gain.) And so the cosmetics companies have decided to hire ladyboys as their new spokespeople. But what do they do when one of their pets goes off-script and makes a politically inappropriate joke?

That’s when the left-wing virtue-signalers they were pandering to turn on them…..

So FAKE – even CNN didn’t run with it. And they’re not just “fake news”, they’re REALLY FAKE NEWS.

The notion of utilizing NG troops for border security, is not a new one – and is well within the authority of the executive – provided they get the governors of the states onboard.

Would actually be a very prudent utilization of manpower to pu NG on the border, and free up INS/ICE agents to go out and make arrests.

I wonder if they will be able to figure out who was the leaker based on who had access to the draft memo?

I’ve seen some comments about using the National Guard from non-border states, like Oklahoma. Do these people really think that people who cross the border only stay in the four states that are on the border?

The draft first mentions using state and local law enforcement agencies to help in picking up the illegals, then asking governors of the states to enter into agreements to let border patrol use the National Guard.

That was my first thought Liz. It would be cool if there were say 3 or 4 people thought to be leaking memo’s from there, they could amend parts in each copy given to the suspected leakers.
When it gets printed they know which person leaked.

What, use the National Guard to repel foreign invaders?

Who comes up with these goofy ideas, anyway?

The anti-native factions are screaming with indignation. They really believe that the cover-up of victims from social justice adventures, refugee crises (a.k.a. immigration reform), and their final solutions (e.g. mass abortions, abortion rites) is sustainable.

Mobilize the National Guard to round up the Fake Newsers like AP…….

didn’t NG get used for transport or security during operation wetback?
or am I remembering wrong?

Now you’ve done it Prof, the dominant media’s slanted, inept reporting to provoke horror on the Left is simultaneously stoking joyful fantasies on the Right. This new mutation of Fake news is more like [Please Don’t Let It Be] Fake news — and the whole point of crying out for better journalism is lost.

Seems like some of the “fake news” may be due to the media’s eagerness to have some salacious scoop so they are interpreting every draft memo written by every junior staffer as potential policy. You’d think the media would have a better understanding of the govt’s love of extreme scenarios and “what if” ideas.

The problem with this story is that, other than the fact that the memo exists and the administration has weighed the possibility of entering into agreements with various state governors to use National Guard units, operating under the authority of the state governor, to assist in the implementation of federal immigration law, no action has been taken. Also, the reporter(s) apparently have no knowledge of how the National Guard functions. The Guard, when called to service with the federal government operates under the DOD and is bound by the same laws which govern the regular US military forces, including the Posse Comitatus Act of 1878. However, when serving the governor of the state, which the Guard unit represents, the members of the Guard assume law enforcement powers within that state. So, under federal law, they could be granted limited federal law enforcement powers if they comprised part of a multi-jurisdictional law enforcement task force. Also, it usually requires a declared emergency to call out the national Guard. Most governors would be reluctant to call-out the National Guard to assist DHS in the enforcement of immigration laws, with all the costs that would incur, unless a true emergency situation existed. It is a good contingency plan, however.

Seeing as that would be a perfectly lawful use by POTUS under the Title 32/Title 10 interchangeability I say, “sign me up!”