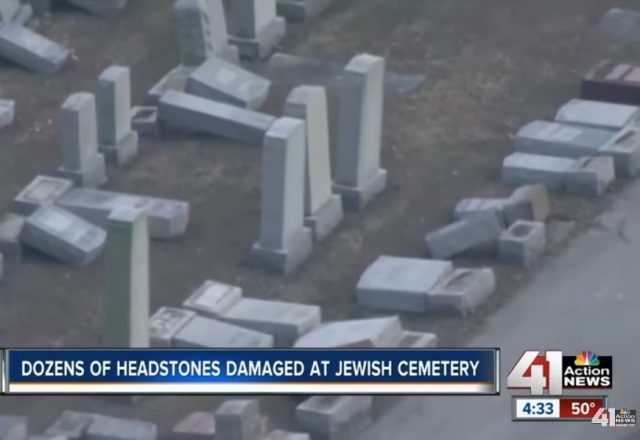 A Jewish cemetery near St. Louis saw over 100 gravestones overturned.

The criticism of this act is deserved, regardless of whether it was the result of non-anti-Semitic hooliganism or an act of intended anti-Semitism. Either way, it is an act of religious intimidation.

What is not deserved is the attempt to blame it on Trump, which is the suggestion of much media and social media attention, and Democratic Party spin.

Unfortunately, there is a long history of toppling Jewish gravestones and otherwise desecrating Jewish cemeteries.

One of the most egregious examples is one never mentioned in the media, the Arab ransacking of the ancient Jewish Mount of Olives cemetery after Jordan captured the area during Israel’s War of Independence:

On the Mount of Olives, the Jordanian Arabs removed 38,000 tombstones from the ancient cemetery and used them as paving stones for roads and as construction material in Jordanian Army camps, including use as latrines. When the area was recaptured by Israel in 1967, graves were found open with the bones scattered. Parts of the cemetery were converted into parking lots, a filling station, and an asphalt road was built to cut through it. The Intercontinental Hotel was built at the top of the cemetery. Sadar Khalil, appointed by the Jordanian government as the official caretaker of the cemetery, built his home on the grounds using the stones robbed from graves. In 1967, the press published extensive photos documenting that Jewish gravestones were found in Jordanian Army camps, such as El Azariya, as well as in Palestinian walkways, steps, bathrooms, and pavement.

The Arab desecration of the Mount of Olives cemetery, including smashing gravestones, continues to this day.

There also is a long history in Europe of Jewish cemetery desecration, including in just the past few years in France and even Belfast, which has a tiny Jewish community.

But it’s not just the Middle East and Europe. Prior to Trump there was a sordid history of desecration of Jewish cemeteries in the U.S. during Obama’s administration as well. 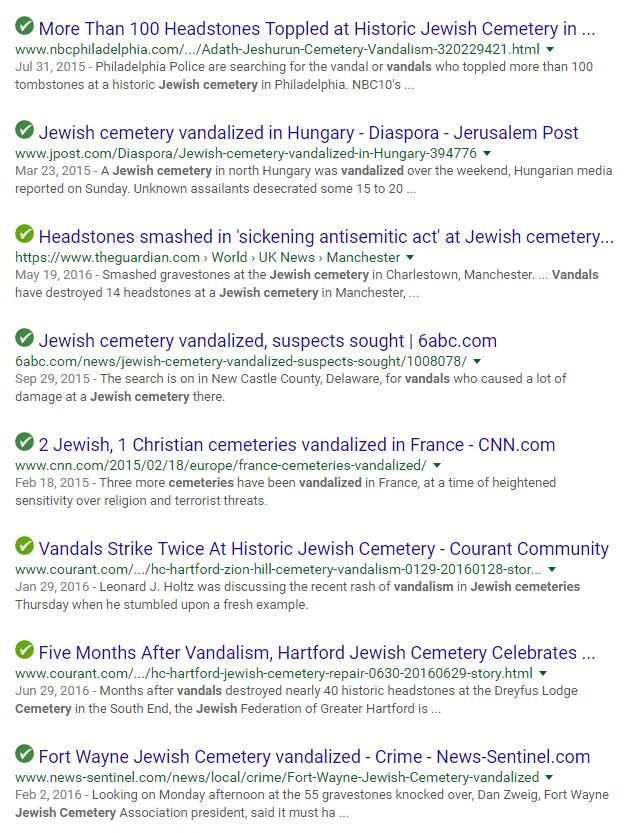 Yet there was no uproar. No mass media attention. No social media frenzy.

Given this long history, why is it only now that the problem is all over the media? We know the answer to that question.

Trump didn’t cause the problem, but Trump is the cause of the media attention. It’s exploitation of anti-Semitism by people who never cared about anti-Semitism but now see political opportunity.

Seeing as this was near St. Louis, I’d bet good money that if they had any security cameras out there, you’d see it was a group of BLM activists who went out and did this.

BLM? You nailed it!

Just a few weeks back the O said how happy he was to see community activists opposing Trump. They actively rioted, looted, attacked cars and assaulted people. How perfect.

No question that the grave vandals were led by some of his favorite community organizers…..with his favorite media waiting outside the cemetery walls and entered a few minutes later to report the made up narrative.

There will be people protesting the trail of tears from Benghazi to Damascus to Kiev, to Denver, too. Make life, not abortion, or something. Very Pro-Choice.

If Democrats lose the Jewish vote they are in deep doo-doo. It is no wonder that they are cranking up the accusations of antisemitism.

More and more, it’s starting to look like Ellison is going to be the new DNC chair.

That doesn’t mean that the Dems will lose the Jewish vote. I believe that the Dems would still collect 39% of the Jewish vote if Hitler himself were the nominee. Maybe that is why it has become so important to paint Trump as “Worse than Hitler!”? Even so, were Trump to run as a Democrat it probably still wouldn’t matter.

I’m pretty sure that if Trump was the raving anti-Semite the progs are trying to paint him to be, he wouldn’t be nearly so close to his Jew-loving daughter.

Things only matter to the media if they are useful.

And, useful to the Media is defined as useful to the Democrat Party. In this case it drums up sentiment against the President and against one of the candidates to lead the DNC.

Yes Professor but you forgot to mention that President Obama was able to restore those headstones to their rightful position simply by the awesome power of his intellect. Much as he quelled the rising oceans and ended all racial turbulence in our fine country.

Maybe this isn’t as much about Trump as it is about who the next DNC leader will be: https://theconservativetreehouse.com/2017/02/21/have-you-noticed-media-pushing-a-national-narrative-of-anti-semitism-today-heres-why/

We Jews were outraged during the past eight years.
We had no voice. No newspaper. No microphone.

By pretending that the Jewish people were not the very reason for the holocaust we have a president enabling anti semtism much the same way Obama enabled the black population to act out.

Do you seriously believe Trump is ‘enabling’ anti-semitism? If so, on the basis of what evidence?

My mother (Latvian & Russian Orthodox)was put in prison for defending & helping Latvian Jews. Later, she was taken from Latvia by the Nazis because she was a nursing student. At some point, she helped Latvians get their passports back. The stories are limited because she did not want to talk about what happened to her. Her memories were suppressed and only came up late in her life. She was a victim – she did not die, but she suffered for the rest of her life.

Many people died during the war.

The Nazis killed many people because of their religion, nationalities, race, sex, politics, disabilities. Yes, many were Jewish, but not all of them. Many died fighting against Germany. Many died because they were just living in their communities. All these people are victims of the war.

Yes, you may have been outraged over the years about antisemitism, but you have a voice. We all have voices.

A troll, and not even a good one.

Yeah, that was my first thought too. He could at least have changed his screen name to Shlomo Abramovitz or something. “Lee Jan”? That’s right up there with Sum Ting Wong and Wi Tu Lo.

Show of hands, who thinks these recent large attacks weren’t manufactured by the left? I’ve been a Republican for 40 years and have never encountered an anti-semite, or racist as a matter of fact. This false narrative needs to be exposed.

Well then if you heve never heard an anti semitic word that means that none have ever been uttered.

Just go to a BLM march, and you will hear anti-semitic smears constantly.

There have always been some antisemites within the Republican Party, such as James Baker. But I’m not surprised that you never met any, because antisemitism has been unwelcome in the mainstream conservative movement since the ’60s, and anyone harboring those feelings kept them hidden.

Even Pat Buchanan, who was long suspected of antisemitism, avoided giving any evidence of it for over 20 years. When he did he became persona non grata among mainstream conservatives, and found refuge in the paleoconservative movement, where you will find many antisemites.

And it’s that paleo reserve of the disease that eventually became part of what is now known as the alt-right, where antisemitism is ubiquitous, though far from universal. The Trump revolution brought many of these evil people into the GOP “big tent”, which is now rather too big.

If you doubt it, witness the vile antisemitic hate mail that people like Ben Shapiro, Bethany Mandell, or Julia Ioffe have received when they turned on Trump. That didn’t come from leftist mobies; it came from this cancer that has recently attached itself to our movement, brought in on The Donald’s coattails whether he knows it or not.

Last night NPR’s segment on this quoted from people who were at the cemetery blaming white supremacists and Trump for the vandalism, despite all the other possibilities of varying probability that spring to mind, and appear in this thread. Mind you, this wasn’t the NPR reporter’s spin, but actual quotes from people on the scene. If they’re representative, and I suspect they are, Jews as a group are ALMOST as bound to the Democratic Party plantation as Blacks.