May be connected to threats to over 60 Jewish centers around the country. 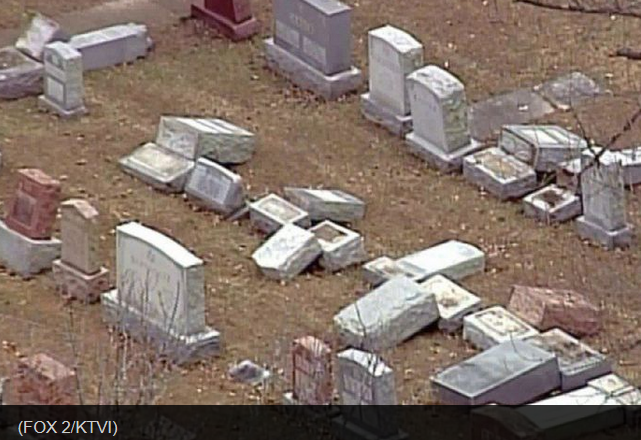 Vandals have inflected serious damage on dozens of headstones at a Jewish cemetery near St. Louis, MO.

…The damage is at Chesed Shel Emeth Cemetery at Olive and Hanley. Police said the damage took place over the weekend.

Some family members drove to the cemetery Monday evening to see if their loved one’s headstone was toppled, but the cemetery was closed.

Karen Aroesty, the regional director for the St. Louis-area Anti-Defamation League, got a call about the vandalism around noon. She walked through the cemetery to see the damage for herself and said she was appalled. She hopes to work with investigators to figure out if this was a hate crime.

Though local investigators have no suspects identified yet, they suspect it was the work of an organized group.

Police would not say if they considered the vandalism to be a hate crime or not. It is believed some organization was behind the crime, meaning this was not the act of one individual, the report said.

The vandalism occurred the same day as 11 Jewish community centers received bomb threats. Federal authorities are investigating these incidents, to determine if they are connected to a disturbing wave of threats that began earlier this year.

In the wake of 11 new threats today against Jewish centers, from New York to New Mexico, the FBI said it is investigating, along with the Department of Justice, bomb threats to the centers across the country.

Federal authorities are looking into threats communicated to at least 60 Jewish centers around the country this year. The threats started in January and the FBI began investigating later that same month. The threats have come in “different waves,” with more threats phoned in to centers today, according to one source familiar with the matter.

The FBI said it is “investigating possible civil rights violations in connection with threats to Jewish Community Centers.”

Trump calls slew of anti-Semitic threats against Jewish centers "very sad reminder of the work that still must be done to root out hate" pic.twitter.com/xWFu5y1SLX

The national media response will be to ignored these threats as ‘local stories’, then publish hysterical headlines warning ‘Trump’s pro-zionist policies stir alarming rise in islamo-phobia’.

Nope, they’re blaming him / his advisers for encouraging anti semitism.

When in fact this is just what happens when John Kerry has too much time on his hands.

Disrespectful and disgraceful behavior regardless of the motivations of whoever did this! This targeted attack is nothing more than a cowardly attempt at intimidation. Cowardly because it likely occurred at night and quite possibly because there are no security cameras there. I wish the police luck in tracking down whoever did this!

maybe the dead are tired of voting Democrat…

“If” it was a hate crime…oy vey

It might not be. Such incidents happen often, at all kinds of cemeteries, and usually it’s just bored teenagers thinking doing this makes them brave or cool, or else it’s goths or something like that. Even when the vandals leave graffiti aimed at the specific ethnic group identified with the cemetery it usually doesn’t mean the cemetery was chosen out of hatred for that group, but the exact opposite: the slurs were chosen because of what kind of cemetery it was, and had it been a different cemetery different words would have used. But once in a while it happens to be a Jewish cemetery and everyone immediately jumps to the conclusion that this is antisemitism.

It’s exactly the same as church fires, which are ubiquitous, but when the church happens to be black people jump to conclusions about racism, which usually prove to be wrong.

More likely middle east immigrants or deranged leftist students from the local college – which should be defunded.

A few years ago one of our local cemeteries had some graves knocked over. Turned out to be a couple of drunken idiots being…. well drunken idiots. I won’t discount that there may be some other reason at work in this case for these gravestones being knocked over but given that it was only Jewish graves desecrated it’s a very small “if”.

A local low life was sentenced to 2 years in prison (should have been more) for going into cemeteries and using a crowbar to pry up veterans name plates, which are brass. Then he would sell them for scrap metal so he could buy meth, or something.

Like I said, I think his sentence should have been way more than 2 years for that.

Um, the vandals didn’t pick out the Jewish graves to vandalise, leaving the gentile ones untouched. This is a Jewish cemetery, so all the graves are Jewish. Thus any vandal who chose to do this here would by definition be vandalising only Jewish graves, even if the choice of cemetery was completely random.

I suspect many of these antisemitic events can be traced back to the leftist BDS agitators at nearby colleges and universities. They are simply carrying out the BDS imperative to “Punch a Zionist today.”

Last night NPR’s segment on this quoted from people who were at the cemetery blaming white supremacists and Trump for the vandalism, despite all the other possibilities of varying probability that spring to mind, and appear in this thread. Mind you, this wasn’t the NPR reporter’s spin, but actual quotes from people on the scene. If they’re representative, and I suspect they are, Jews as a group are ALMOST as bound to the Democratic Party plantation as Blacks.