Bercow already in trouble for remarks about Trump. 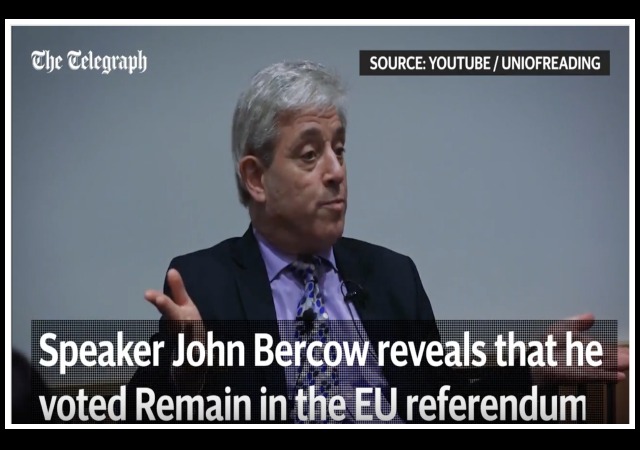 Uh oh. UK Parliament Speaker John Bercow has found himself in deeper water after he revealed to students that he voted for the UK to remain in the European Union on the Brexit vote. From The Telegraph:

His fresh comments appear to breach the convention that Speakers of the House of Commons do not allow themselves to be drawn into political debate.

Parliamentary rules state: “The Speaker is the chief officer and highest authority of the House of Commons and must remain politically impartial at all times … therefore, on election the new Speaker must resign from their political party and remain separate from political issues even in retirement.”

The Telegraph viewed a video of Bercow’s 80 minute session with students at Reading University:

According to a video of the event seen by The Telegraph, he told the students: “Personally I voted to Remain. I thought it was better to stay in the European Union than not.”

Mr Bercow also took aim at what he described as “untruths” during the campaign, and how “promises were made that could not be kept”.

Now critics think Bercow will allow the Members of Parliament “making negative points about Brexit more time to speak in the chamber and cut short those on the opposite side of the debate.”

He also faces allegations that he “prevented the Commons being warned about police inquiries into Keith Vaz after accepting tens of thousands of pounds from business associates of the Labour MP towards his election campaigns in 2010 and 2015.”

At least 150 conservative MPs support a motion to remove Bercow as Speaker after he made those comments about Trump:

James Duddridge, a Conservative MP and former foreign minister, tabled a motion of no confidence in Mr Trump after the Speaker said he wants to bar President Trump from addressing Parliament.

Conservative MPs opposed to Mr Bercow want a “fresh speaker” and believe that even if 10 per cent of MPs say he should go his position will be “untenable”.

Mr Duddridge said: “He has got to go. He can no longer reasonably chair as Speaker, this is the straw that broke the camels back.

“He was not within his remit, he was using a minor technicality. Any MP can invite anyone into the House of Commons.”