Members of Parliament have signed a petition to stop a Trump speech. 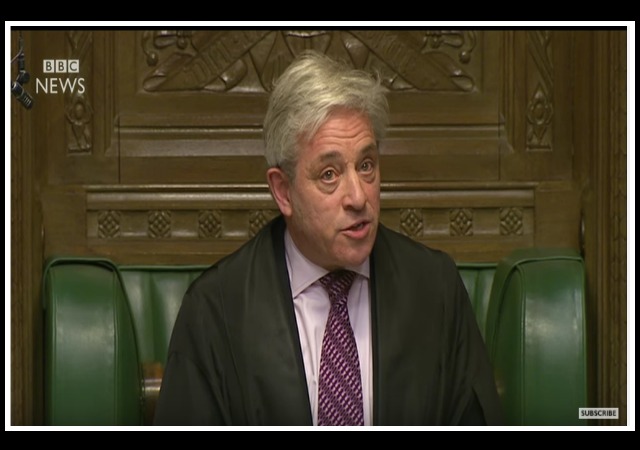 UK House of Commons Speaker John Bercow has announced he does not want President Donald Trump to speak at Parliament during a state visit. Bercow does not want any Members of Parliament (MP) to face backlash over the president’s speech.

So if Trump does make a speech, he may have to give it at the Royal Gallery instead of Westminster Hall, which was built in the 11th century. The Royal Gallery came into completion “800 years later and currently covered in scaffolding.”

British Prime Minister Theresa May invited Trump when she met with him last week at the White House.

“We value our relationship with the United States,” Bercow insisted, adding that “if a state visit takes place, that is way beyond and above the pay grade of the Speaker.”

“However as far as this place is concerned I feel very strongly that our opposition to racism and to sexism and our support to equality before the law and an independent judiciary are hugely important considerations in the House of Commons,” he said.

At least 163 MPs signed a petition to deny Trump the ability to speak at Westminster Hall. Bercow noted that “an address by a foreign leader to both Houses of Parliament is not an automatic right, it is an earned honor.” He will also oppose Trump from speaking at either location.

The motion said signatories “deplore” Mr Trump’s crackdown on refugees from predominantly Muslim countries as well as his comments on women and torture.

Stephen Doughty, the Labour MP behind the demand, said denying Mr Trump a Westminster Hall address would be a “victory” for the “standards and principles of Parliament”.

President Barack Obama became the first U.S. president to address both Houses of Parliament in 2011 in Westminster Hall, which Bercow happily took in:

Mr Bercow spoke before Mr Obama’s address and praised the occasion. “This Hall has witnessed grim trials and the sentencing to death of a king, coronation banquets, ceremonial addresses and the coffins of those receiving the last respects of our people,” he said.

“Few places reach so far into the heart of our nation. Yet until today, no American president has stood on these steps to address our country’s Parliament. It is my honour, Mr President, to welcome you as our friend, and as a statesman.”

The UK welcomes tens of thousands of immigrants without proper documentation! “Come as you are, you are all welcome here!”

Not exactly. Witness the migrant camps at Calais . . . .. the UK doesn’t welcome all comers either, not by a long shot.

Bercow can have France’s Le Pen speak to Parliament then.

“Today Marine le Pen, promised a Crackdown on Immigration and Globalisation in a speech in Lyon, France.”

Bercow does not want any Members of Parliament (MP) to face backlash over the president’s speech.

Code for, “is afraid that nobody will be able to prevent Britain’s Muslims from going all ‘Religion of Peace’ on them and chopping some heads off.”

In other words, they’ve surrendered. Maybe they need the Churchill bust more than Trump does.

President Trump doesn’t need the Churchill bust, and at this point it appears it wouldn’t do the British Parliament any good. It is a symbol of political strength in the face of adversity, which President Trump has aplenty, and which is sadly lacking in the British Isles, as demonstrated by their tolerance of Muslim enclaves that are de-facto “no-go zones” for the police.

Our cousins across the Atlantic have lost the backbone they displayed so magnificently during WWII and that was exemplified by Churchill. Sad.

As a reminder, and in case some do not know, the great Churchill was half American. 🙂

And Sir Winston had a proper British physician who would indulge him by prescribing alcohol to treat his multifarious infirmities.

Of course in those halcyon days, if a half-American liked his doctor, he could keep his doctor.

Speaker Bercow, the Lord Chamberlain, and the equivalent of the Speaker for the House of Lords are what the Brits call the Keyholders who decide which non-Brits can address each House. It is within his power to deny access to the House of Commons and try to block him from addressing the House of Lords.

I am not a nice person, so if it was in my power, I would have no problem with saying that Speaker Bercow, the 163 MP’s who signed the petition against the address, and their extended families who are not US citizens are barred from being in the US.

He should bring it along

Let the UK take what we don’t want.

Trump may bring up inconvenient facts that expose the establishment and motivated the British vote.

If our POTUS is unwelcome to speak there, why oh why should we protect them when the religion of PEAS (and farts) start rioting coming over from Calais ?

I wonder what William Pitt would think of Parliament today? They blew it big time in the 1770’s… they are doing it again.

Too bad some really great people are stuck on an island with a “yuge” bunch of losers.

The Land of Hope and Glory … faded hope and faded glory.

Brexit and Trump are Narcan to the progressively addicted. Going cold turkey into reality is painful.

Britain desperately needs a bilateral trade agreement with the US. It leases its Trident subs from the US. It depends on the US to sell it F35s for its Navy and Air Force. Etc., etc. Trump is reputed to be a vindictive man. He might respond badly to a public insult. Perhaps it would be best if he cancelled the UK trip and met with Le Pen first.

“Britain desperately needs a bilateral trade agreement with the US.”

It trades all over the world without ANY trade agreements outside of those of the EU…which are stultifying. It trades IN SPITE of the EU agreements.

CONTRARY to the T-rumpian urge to contract and withdraw, BREXIT is an expansive, classically liberal notion.

“Trump is reputed to be a vindictive man. He might respond badly to a public insult.”

If that is the case, it will vindicate every bad thing I’ve said about him. Wouldn’t it…???

It is within the UK’s power to destroy the “Special Relationship” we have with the UK. The Treasonous Criminal Zerobama did damage to it, but Trump wants to restore it. If you kick us out, we won’t be back. Rescuing your arse twice in the 20th C is enough.

They pulled our asses out of the fire just as much.

They’ve been an ally of incalculable worth ever since WWII, and we would not have won the Cold War without them.

Where has the UK pulled our arses out of the fire? We actually pulled their, and Europe in general’s, chestnuts out of the fire, with the Jugoslav wars. They couldn’t have done it alone.

Maybe we should earn some brownie points in South America for advocating the liberation of the Islas Malvinas from British occupation?

Voluntarily putting oneself at the “back of the queue” with your largest trading partner? Interesting strategery.

PM May also banned Michael Savage, Pamela Geller and Robert Spencer. .
Free speech in the UK must be similar to that in Berkeley, CA

No Trump, bring me shrubberies!

Incomprehensibly, my last comment was blocked/deleted. Are you not open to discourse here?
Suffice to say, the point I made was that the UK may be beyond the point of investing effort. It is no longer recognisable as a Country that manifestly treasures freedom. It is time the US turned to the New World and invested effort in Canada, Australia and New Zealand before they too are irretrievably swept away by UN centric Cutural Marxism.

IMHO no words can ever convey the utter & complete contempt with which this little man, and his wife, are held in the U.K. Even before this latest grandstanding. He holds a vital position in the execution of our unwritten constitution and he brings to it IMO exactly the opposite qualities that are needed to fulfil the role. How he got into power I am unable to comprehend. President Trump should wear this particular “rejection” with tremendous pride.

IMHO no words can ever convey the utter & complete contempt in which this little man, and his wife, are held in the U.K. Even before this latest grandstanding. He holds a vital position in the execution of our unwritten constitution and he brings to it IMO exactly the opposite qualities that are needed to fulfil the role. How he got into power I am unable to comprehend. President Trump should wear this particular “rejection” with tremendous pride.

On Fox business I just heard a Brit say the speaker invited the North Koreans to tea in his apartment. He also said the speaker was a disgrace because he had politicised the position.