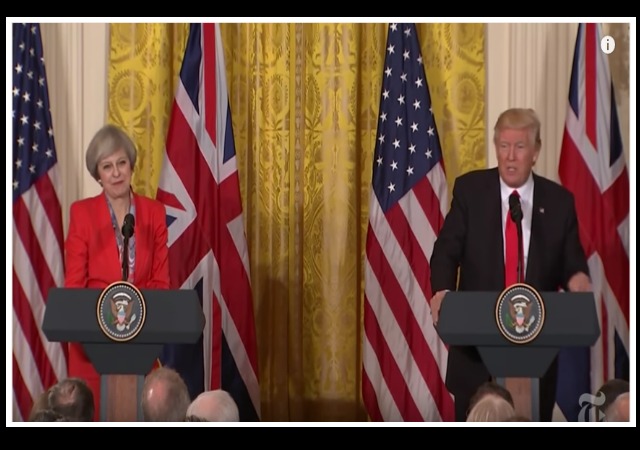 So I’ve kept an eye on the UK parliament ever since Speaker John Bercow announced he did not want President Donald Trump to speak to parliament on his UK visit. At least 163 Members of Parliament (MPs) signed a petition to keep Trump from speaking at Westminster Hall.

Well, due to the ruckus, reports have emerged that Trump’s visit may occur at the end of summer when parliament is not in session. This means Trump can “avoid a formal snub.”

According to Westminster sources, a weekend visit at the very end of August or in September is now under discussion between the government, Buckingham Palace and the White House. A source described such a plan as “the preferred option at our end”. Parliament will be in summer recess until 5 September and adjourns again for the party conferences on 15 September for nearly a month.

Such an arrangement would mean that Trump would not be invited to address parliament at all. The approach follows Bercow’s statement this week that he would not give his consent either to a speech by the president in Westminster Hall or in the royal gallery, both of which have traditionally been used for addresses by visiting statesmen and women.

Prime Minister Theresa May visited Trump at the White House where she told him that Queen Elizabeth II has invited him on a state visit.

The invite ignited a petition to the queen to rescind the invitation with more than 1.8 million signing it:

The petition said that while Trump should be allowed to enter the U.K. in his capacity as president of the Unites States, “he should not be invited to make an official State Visit because it would cause embarrassment to Her Majesty the Queen.”

“Donald Trump’s well documented misogyny and vulgarity disqualifies him from being received by Her Majesty the Queen or the Prince of Wales. Therefore during the term of his presidency Donald Trump should not be invited to the United Kingdom for an official State Visit,” the petition said.

There is also chatter that the government may limit Trump’s time in London due to numerous protests against him. People in London have already gathered around Westminster to protest the president due to his executive order that halted immigration from seven countries for a few months.

Trump may visit the Midlands instead “to address a mass rally and raise money for Armed Forces veterans.” In other words, a Brexit-friendly area. Some have suggested a rally in Birmingham to paying attendees, “with profits going to the Royal British Legion.” The Telegraph continued:

It is felt that a gathering in the Brexit heartland might offer President Trump a more sympathetic hearing as a supporter of Britain out of the European Union.

One source close to the president said: “It would be his biggest rally with 85,000 people coming together to celebrate the US-UK special relationship. If he is not speaking to the Houses of Parliament, let’s go to the people. The only person who gets screwed is the Speaker of the House of Commons.”

But of course this has caused some controversy as well. Labour MP Liam Byrne started a petition (petition all the things!) to keep Trump away from Birmingham. Byrne does not like the idea of Trump visiting a speech that costs attendees. He wouldn’t mind if Trump visited “to meet its multicultural communities.”

The British Parliament is still playing by the old rules. They have no idea that the entire game has changed.

If the Queen doesn’t at least have the authority to invite a State visit, and to tell Parliament they have to at least listen to a foreign head of state, then the UK may as well roll out the guillotines and go full republic.

Money is involved, so the Queen doesn’t go around making these invitations, she does so at the polite request of the government of the day. If that government is frightened that Parliament will be a poor host, that puts them all in quite an awkward bind.

But, as I’ve long tried to explain to people, the reason the UK doesn’t break out the guillotines and go full republic is because the monarchy is a hand-raised pet. So long as it does not bite the hand of its master, it is harmless, and absorbs a lot of bile and hatred that would otherwise be directed at elected politicians.

Everybody needs the USA right now. We are the only market that will grow demographically over the next 30 years.

Conversely, it will be at least 30 years before the EU will see any growth. And, there won’t be an EU by that time.

If the brits don’t feel that they can be courteous to our Head of State, then let the caliphate take over.

We have saved them twice in the past 100 years, they haven’t done squat for the USA……

The Brits fought the Nazi’s virtually alone for a long time. We saved them saving ourselves.
Most Brits don’t approve of this behavior. It’s just the very vocal left.

Britain seems to mirror the US right now: most Brits want out of the EU, but their version of the democrats/GOPe wants to go against the will of their electorate.

The fight is on, both here and abroad.

The Queen certainly has no authority to tell Parliament it has to do anything, any more than the President has that authority over Congress. No British king or queen has ever had such authority. The very idea is unthinkable.

Because of Brexit – the UK needs all new trade agreements. Having an advantageous trade agreement with the US (#1 trading partner) is critical. After the USA, look for the UK to concentrate on other former colonies: Canada, Australia and India.

With the US getting out of the Global Management Business – the Bretton-Woods system will come to an end. That means the USA will no longer police and guarantee everyone, everywhere freedom of the seas for trade and migration. And, everyone will no longer have tariff free access to the United States Consumer Market.

Trade will no longer be a political tool. Trade will be an end in itself that will benefit the USA.

Deal with it, World.

And what purpose does a Trump visit to the UK serve us? Perhaps he should just stay home and the next time the British call about something he should tell them he is busy raising money for our own veterans. If they feel it is beneath them to recognize our head of state why should we accord theirs any respect?

The real purpose is to show that the UK wants a robust trade relationship with the US after Brexit, which is why they’re trying to minimize the amount of hatred leveled against him by elected parliamentarians, at least.

By your logic, he can just go to Israel and stay there, because there are so many people here in America that are protesting everything that moves. Don’t give the asshats in Britain a veto on your comings and goings. There are more than enough anarchists and agitators to be a nuisance everywhere you go. Is it any surprise that Britain would put some of them in power? We did.

“Donald Trump’s well documented misogyny and vulgarity disqualifies him from being received by Her Majesty the Queen or the Prince of Wales. Therefore during the term of his presidency Donald Trump should not be invited to the United Kingdom for an official State Visit,” the petition said.

The progs have gone full-blown-retard with their hypocrisy.

They were happy with Bill Clinton, the flavored cigar aficionado and biting rapist.

Give us all a break.

Care to list how many vulgar and misogynist British politicians QE-II has had to suffer meetings with. I would consider QE-II/ Trump audience as interesting as King George III/ John Adam audience.

Aren’t this the people whose potential future king committed adultery and wanted to be his mistress’s tampon so he could be close to her? These are people who are offended by Trump but they still fund Prince Charles and his new slut wife.

And they are happy with beheading muslims enslaving women and practicing pedophilia.

But Trump and an old recording…

I don’t think the President will play along. His style would be to force the issue and make “Great” Britain face the gangrene in their body politic.

He can’t force this because even the Queen of England has no right to enter Parliament unless explicitly invited, so she can hardly invite Trump to go there. Her opinion is 100% irrelevant.

JBourque – A very salient point. The British Monarchy is a very well kept house pet and PR tool. Which, as you so rightly pointed also, the Monarchy keeps the heat off of the elected weasels in Parliament.
Paul – I guess I don’t understand how POTUS Trump, or any other Head of State, is “dis-qualified” from being received by the Queen of England and/or the Prince of Wales.
James Douglass
Garden City, Kansas

Maybe it IS time to return Churchill’s Bust – permanently and if the Brits cannot understand the meaning of that, they are in worse shape since before Guy Fawkes.

Well, that is EXACTLY what the remoaners want! That would be playing in to their hands.

Best to move on and understand that this is nothing more than the puppy dogs barking at the moon moment.