“The worst possible way to leak something”

“The worst possible way to leak something” 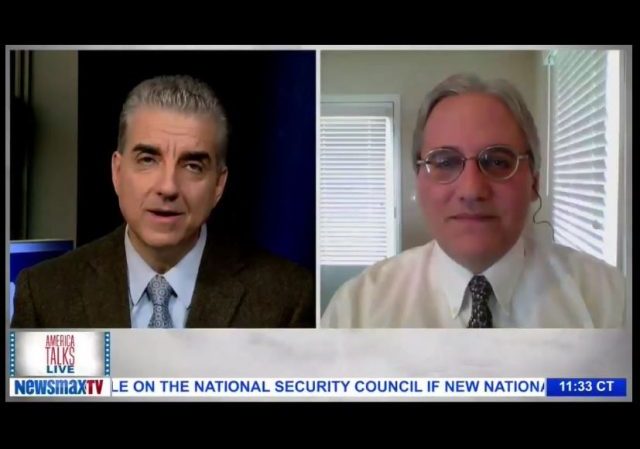 I appeared earlier today on The Steve Malzberg Show on Newsmax TV.

We covered several topics, starting with my post, The fact-free Intelligence Community-Media trial of Trump by innuendo:

I’m sorry, you don’t take Maxine with a grain of salt, you need the whole shaker.

The voice is a little weak on the call. Have you considered a Blue Yeti mike?

Nice job, Professor! Well done. Perhaps, one day you will be invited more regularly on national talk shows like Alan Dershowitz does or even have your own show. Wouldn’t that drive the Ivy League liberal colleagues further insane.

It’s only a matter of time till the Trump White House calls on Prof J via Skype during a presser.

The bar cannot be lowered any further, except by street violence by the Soros brownshirts. (But that’s okay: that’s what Obama made the government buy all that ammo for.)
http://www.wnd.com/2015/04/feds-buying-95000-rounds-with-maximum-stopping-power/

Violence aside, there is no place to go but up.

And nowhere for Waters to go but to oblivion.

street violence by the Soros brownshirts

Don’t lose track of Obama’s control of a $14 million war chest and about 33,000 volunteer brownshirts (oh, ‘activists’) in his Organizing for America non-profit.

He has a nice Washington DC office and some of his old campaign cronies plotting against America as we speak. Maybe the IRS should ‘re-examine’ their 501 (c)4 status…

-Wear a dark jacket on in the future.

-Try to get a lens that avoids the fisheye effect.

And save your dirty socks for Waters’ mouth.

And Maltzberg should be whipped for being such a putz con

• We know that Russians hacked a major U.S. political party in order to interfere in the election in order to damage their presidential candidate.

• We know that Paul Manafort, Trump’s former campaign chair, worked with the Russian-allied Ukrainian president before his ouster. Manafort resigned after it was alleged he received large sums of off-the-books money.

• We know that the National Security Advisor, Michael Flynn, lied about the nature of his contacts with the Russian government.

• We know that Trump called for the Russians to release hacked emails from Hillary Clinton.

• We know that Trump called for the imprisonment of his political opponent.

• We know Russian money flowed into the Trump organization in years past.

• We know from phone records that the Trump campaign had repeated contacts with the Russian government in the year before the election.

• We know that Trump has refused to release his tax returns, and that there are a large number of potential and actual conflicts of interest.

• We know that Trump has spoken glowingly of the autocratic head of Russian’s government while disparaging the leaders of democratic allies in Europe.

• We know that Trump called members of the press “enemies of the people” for accurately reporting on the above.