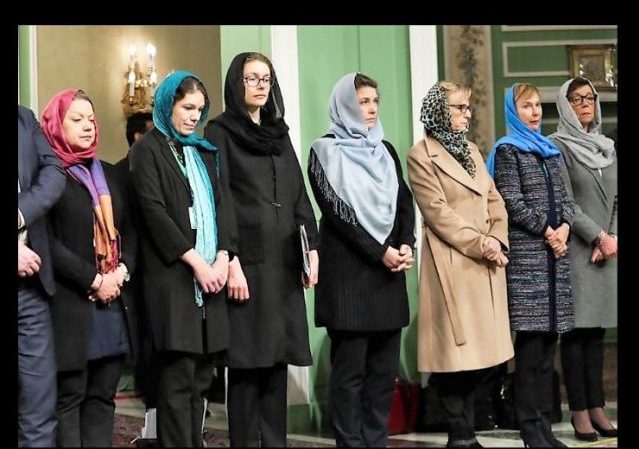 Sweden’s new “first feminist government in the world” donned hijabs while on a state visit to Iran, as U.N. Watch reports.

Trade minister Ann Linde and other members of Sweden’s “first feminist government in the world” walked past Iranian President Rouhani yesterday as they covered their hair in compliance with Iran’s compulsory hijab law, despite Stockholm’s promise to promote “a gender equality perspective” internationally, and to adopt a “feminist foreign policy” in which “equality between women and men is a fundamental aim.”

The scene was also a sharp contrast to Deputy Prime Minister Isabella Lövin’s feminist stance against Trump, in a viral tweet and then in a Guardian op-ed last week, in which she wrote that “the world need strong leadership for women’s rights.”

Linde “sees no conflict” between her government’s human rights policy and signing trade deals with an oppressive dictatorship that tortures prisoners, persecutes gays, and is a leading executioner of minors.

Here is Lovin’s tweet that was hyped as a taunt directed at Trump:

Just signed referral of Swedish #climate law, binding all future governments to net zero emissions by 2045. For a safer and better future. pic.twitter.com/OqOO2y8BU6

Contrast that stance with the actions by leftist feminist members of the Swedish government who recently traveled to Iran.

They had a choice — stand for their leftist feminist values by refusing to go to Iran if it meant supplicating themselves to the Mullahs.

We are witnessing the death of women's rights. The cause of death is suicide as female leaders submit to female-oppressing regime of Iran https://t.co/hdACA1PO52

Walk of shame: Women of Sweden's "first feminist government in the world" don hijab as they walk past Iran's Rouhani https://t.co/aeEFgibVhV pic.twitter.com/urHrtObkYv

This bizarre sight was met with disdain and disgust on Twitter.

@JDefiant9 Sweden's oh so feminist govt donning the hijab in Iran. Why is feminism such a cosy bedfellow with Islam? pic.twitter.com/Hb0E1un2xm

And a pointed reminder:

The re-education of Christians is underway by Islam. When do we say no? pic.twitter.com/J6c8YO4cME

Too bad they’re taking the rest of Sweden with them. It was once a gorgeous country.

This is as sad and pathetic as the recent picture of the all-female band of European “ministers of defense.”

Where is today’s Charles Martel when one is so badly needed?

We are witnessing the decline of Western Civilization. Self indulgent, arrogant pea brains.

And learn to make a good sammich!

That whole “submission” thingie takes on a LOT of resonance.

Just think what a powerful statement walking around with your hair open to the sky would make in I-ran.

How does one renounce a heritage?

Where have all the Shield Maidens gone

The Stockholm Syndrome descent into dhimmitude.

Nothing says strength and feminism better than a hijab….well, maybe a knitted p-hat….or, sex toys instead of guns….crap, I am getting lost in all this feminism and strength.

This is great practice for when Islam conquers Sweden and that is the only clothing they can wear.

Another few months at this rate.

If they hope to be welcome in their old home, the Swedes will have to assimilate their invader’s culture. Still, it’s just left-wing ideology, but they will have to deny their twilight faith.

Will they burn the Hijab? It seems a bit constricting.

Come on, female chauvinists. Burn the Hijab, and the bra, and the Hijab.

Female genital mutilation takes place in Iran. I guess that the mutilation of women is just fine with these “feminists”.

It’s happening across Europe and here in the States, too. According to this latest batch of misogynist feminists, cutting off a woman’s clitoris is okay. Because multicultural.

Maybe their muzslime buddies will gang rape them and mutilate their pewees for them.

If this group visited an African nation that practiced cannibalism would they eat a human at the state dinner? Would they accept the help from human slaves while in a slave nation? Of all the nations on this earth, Iran is one of, if not the most evil of all and these fools are submitting to them. Feminine leadership? This is the opposite!

I’m one that says, when in Rome, etc, they should follow the laws of the country they are in. It what I want here, when people come in to USA, but why the heck are they visiting Iran in the first place? Oh wait leftists, dumb question.