The vote took place at 2AM EST. 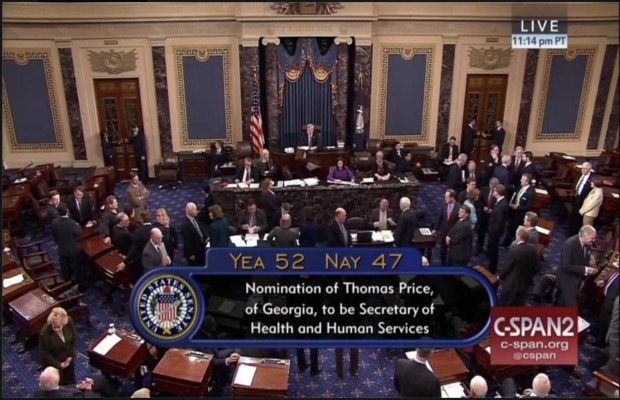 Voting along party lines, the Senate has confirmed Rep. Tom Price (R-GA) as the next Secretary of Health and Human Services. The Democrats once again held the Senate to a 30 hour debate to change minds of the Republicans, but failed once again.

This is a huge first step for Republicans in Congress who want to repeal and replace Obamacare, which Price “has been prominent in pushing alternatives” to the law.

More than likely, Price will get right to work on Obamacare:

Mr. Price is also expected to follow through on an executive order, issued by Mr. Trump on the first day of his administration, directing federal agencies to pare back regulatory elements of the ACA in ways that don’t require congressional action. There’s little evidence of action on that front so far, but Mr. Price’s installation could change that.

One rule he could overturn, for example, is the Obama administration mandate that health plans include contraceptive coverage at no cost to the patient, a protection not explicitly written into the law. As a congressman, Mr. Price voted consistently against federal funding of abortion and expressed skepticism about the federal contraception requirements.

A lot of Democrats used their time of the floor to rail against Price and his pro-life views. They all think that women deserve an HHS secretary who know that women can make their own healthcare decisions.

First of all, abortion is not healthcare. Abortion is the murder of an unborn human being. Plus, as a female, I know our sex can make our own decisions and therefore can purchase our own birth control products. We shouldn’t need the man to supply us.

The Democrats also expressed gloom and doom if Price took over the HHS:

“The debate on Congressman Price’s nomination is a referendum on the future of health care in America,” said Sen. Ron Wyden (Ore.), the ranking Democrat on the Senate Finance Committee. “This is about whether the United States will go back to the dark days when health care worked only for the healthy and wealthy.”

Wyden focused on Price’s views on Medicare, the federal insurance system for older and disabled Americans and a program that is far more popular with the American public than is the ACA. Price has advocated a fundamental change long favored by conservatives, which would end Medicare’s half a century as an entitlement program guaranteeing coverage to everyone who is eligible. Instead, it would become a “defined benefit,” giving eligible people a fixed sum of money to help them buy private health insurance.

Wyden lambasted that idea, saying that “Medicare is a program Congressman Price doesn’t believe in, and it offers a guarantee of services he doesn’t think seniors should have. Medicare is built on a promise that Congressman Price wants to break . . . that when you turn 65, you will be guaranteed health care benefits regardless of your economic station in life or the status of your health.”

You know what really cracked me up? Sen. Elizabeth Warren lecturing us on ethics:

But Sen. Elizabeth Warren (D-Mass.) — in her first floor speech since she was temporarily banned on Tuesday night — said Price should be disqualified for “basic ethics.”

“He should have withdrawn his nomination weeks ago, and if he didn’t go voluntarily, the president and his friends in Congress should have quietly but forcefully pushed him out,” she said.

Can we start referring to this law as being about “insurance” instead of “health care”?

The whole notion that this law is about “care” is ludicrous. It does not cover the main things I do to take care of my health, and has had the perverse result of increasing insurance costs and deductibles drastically, so that many people are in a position where they have decreased care available.

Alright who plugged the quarter into squaw who speaks with forked tongue?

It’s a [email protected] shame that these women who want to ‘be in charge of their own bodies’ cannot be in charge enough to take normal contraceptive measures if they are indulging in sex.

It’s so nice to see how Trump is bringing people together and increasing productivity. I mean having all 100 Senators actually *working* at 2AM is a nice change from their normal noon-3:00 workday. (snerk!)

I found it interesting in the Sanders/Cruz debate that the Left has a new/recycled crowbar to use in warping public opinion, and that is to refer to health care as a ‘Right,’ and that any attempt to touch Obamacare is to trample on that Right.

Health Care is as much of a right as any other economic activity. If I want to go purchase a shotgun and the government interferes, they’re violating my rights. If I want to go get a MRI and have a doctor evaluate it with my own cash, more power to me.

Frequently, people do not understand the difference. I have a close friend who takes well over $10k in medicines a year, and is totally baffled why going to a new insurance company would cost him (wait for it) over $10k a year. Bookie, duh.

“Health Insurance is gambling and the agent is a bookie.”

No. Kinda the opposite.

Any REAL insurance is a means to manage risks, not take risks. Or to spread risk over a pool of people (who are volunteering to join the pool). It is a good example of “good” socialism (voluntary as opposed to coercive).

We all run risks of injury or illness as part of life, and that’s no “gamble”. So, like with shipping interests in the earliest days of insurance, we just find it very useful to spread out the risks inherent in what we do…in this case living.

The real gamble is to run without insurance, as I’ve done all my life.

The EO easing the regulations of Obamacare is a bad idea. This law as it is written and been changed numerous times by Obama, which the Democrats own, hurts bad. If a lot of the pain is taken away people will think it isn’t so bad and will be mad when/if the GOP repeal it. Make it hurt until it can be permanently erased. Remind them of the pain you repealed and pick up more seats in the Senate in 2018.

What is all this “repeal and replace” stuff?
Just repeal.
Every state has laws about insurance, and we have Federal laws giving money to hospitals to do pro bono work.
Before The Affordable Care Act, if a sick person went to an emergency room that got emergency medical care.