If anyone can be female by merely saying so, no one is truly female. 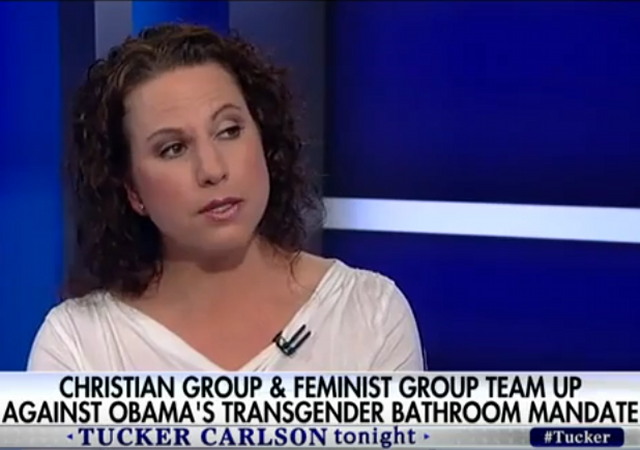 Obama’s transgender bathroom mandate has created strange bedfellows. Some feminists have apparently figured out that if men can simply claim to be women, it takes power away from women. Imagine that.

Kara Dansky of the Women’s Liberation Front or (WoLF), appeared on Tucker Carlson’s show Tuesday night to address the issue.

Here’s an overview of the segment from the FOX News Insider:

The Obama administration told public schools last year they had to allow anyone who identified as transgender to use the bathroom of their choice. If schools refused to enforce the rule, they would be denied federal funding.

The Family Policy Alliance, which is the public policy partner of the Christian conservative organization Focus on the Family, is working with a radical feminist group, the Women’s Liberation Front (WoLF), to fight the order.

On “Tucker Carlson Tonight,” Kara Dansky, the chair of WoLF’s board of directors, argued that it’s unfair that men who identify as female get the same benefits as women under Title IX.

Dansky said that speaking out on this issue immediately makes you a target for hate.

“We’re called transphobic bigots because we ask questions about gender identity,” Dansky said. “We’re asking questions and we’re standing up for women and girls. And that seems to be not permitted.”

Dansky’s organization (WoLF) is currently suing the federal government over this.

Why is WoLF suing the United States Federal Government?

Women’s Liberation Front (WoLF) is suing the U.S. Department of Justice (DOJ) and U.S. Department of Education (DOE) in order to challenge their recent redefinition of “sex” in Title IX to include “gender identity.” This redefinition effectively renders sex meaningless as a legally protected category in federally funded schools and universities (which is almost every school and university in the country). WoLF filed lawsuit on August 11th, 2016. See the legal complaint here.

How does the DOJ and DOE define “gender identity?”

For example, a male person may declare that he has an “internal sense” of being feminine. According to the DOJ and DOE, he would then be said to have a “gender identity” that is the opposite of his sex. The guidance mandates that a student’s “gender identity” must be treated as the student’s sex “for purposes of Title IX and its implementing regulations.”

The category of “gender identity” totally supplants Title IX’s original meaning of prohibiting discrimination on the basis of sex. In many cases, the new “gender identity” rights of males to access females’ vulnerable spaces such as bathrooms, showers, and locker rooms has been shown to trump women and girls’ right to privacy and freedom from voyeurism, exposure to male nudity, and the threat of sexual harassment.

This is a point Christopher Hitchens made years ago, which we highlighted in this post.

When men figure out it’s more advantageous to be a woman and the government rules that all men have to do is identify as one to qualify, all bets are off.

“If we define sex, under Title IX, to mean gender identity, what we’re essentially saying is that ‘women and girl’ can mean anyone who self-identifies as ‘women and girl,’ which makes the category ‘women and girls’ meaningless as a category.”

Yeah, that’s pretty much where your side is headed. Thanks for keeping up.

She’s right. Sex is defined by biology, not by feelings.

“The Obama administration told public schools last year they had to allow anyone who identified as transgender to use the bathroom of their choice. If schools refused to enforce the rule, they would be denied federal funding.”

ok then, that’s lefty logic…. at least one city did the cost benefit analysis and decide to follow the laws. (Miami, FL)

The same people who thought it was okay for little children to be thrown out of school by Obama over bathrooms are now going ballistic against DeVos.

Maybe if she uses bathrooms as an incentive to end all the wasteful federal funding, they’ll support her? No way – she is a Republican.

I guess it depends on how you define “catastrophic” and qualify “change”.

There is a question of cause and effect, but it seems that emotion precedes logic.

It is refreshing to have a Leftie talk common sense. And it has the added benefit of causing more battles on the Left since so few of them are willing to tolerate common sense.

How long will it take till convicted sex offenders including child molesters assert that “They feel like a women!” and start parading naked through women’s facilities?

As ridiculous as feminism is, I agree wholeheartedly with them in this instance.

Base it on pull ups (16 and up). If you can do 10 pull ups you can use the men’s room, otherwise you have to use the women’s facilities, wimp.

This interview was fascinating. It shows that you can get to the same argument from a different angle. She is so, so right.

Just a tiny example that has bothered me the last few years – someone who “identifies” as being a woman can now compete in women’s sports. Because these “women” are really men, with their stronger muscular skeletal system, we now have Women beaten in women sports by someone who is really a man. So these men can now set records for women that are unattainable by real women.

I’m really glad to see people, such as this feminist stand up for women’s rights against the totalitarian left.

This is the very definition of anti-science, particularly biology, gynecology, and Mendel’s basic law of heredity.

With their lawsuit, these feminists are not only asserting that women have worth and prominence as women, they’re refuting the lie of ‘transgender.’ IE: There are no transgender people. They are simply men or women who suffer from neurosis and seek to impose their gender dyphoria delusion upon the rest of society. They need prayers and mental health counseling – not enabling.

Good luck to WoLF and their lawsuit.

Unfortunately most leftists only discover common sense when its their turn at the whipping post. But still, better late than never.