Why didn’t the truth matter when Obama was in office? 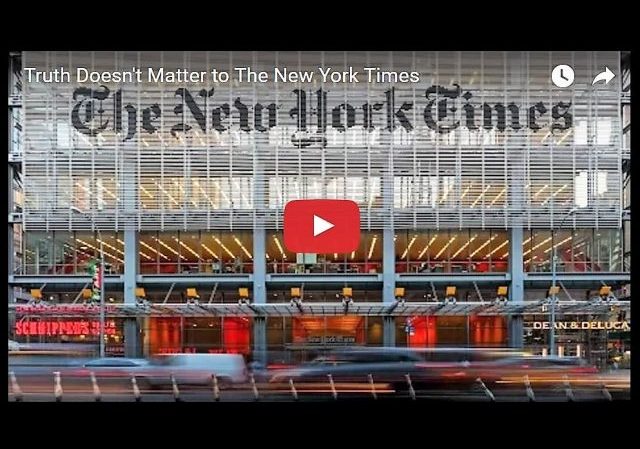 I didn’t watch the Oscars. Why would I want to watch smug people who hate me congratulate themselves on how great they are?

I’d rather vomit blood. Maybe that’s not a fair analogy. I’d rather crawl on my stomach over hot coals covered with broken glass. Yeah, that’s the ticket.

I wasn’t alone, as viewership hit a 9-year low, just a little more than half the audience in 1998.

I was aware, however, that the NY Times planned to run a pretentious ad called “Truth” as a retort to Donald Trumps hits on fake news and, particularly, the NY Times.

The key point of the Times’ ad is that The Truth Is More Important Now Than Ever: 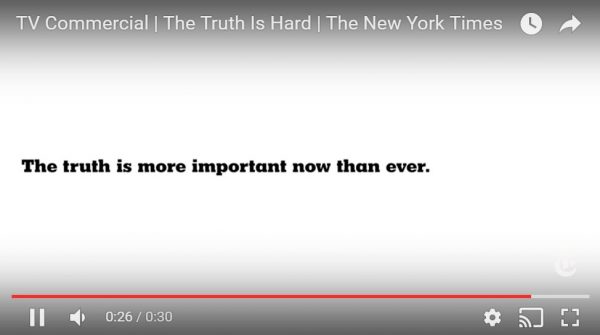 The NY Times ad raised the issue of why is the truth only important now?

The NRA just released a video which hits back at the Times and makes that point, why does the truth only matter now?

The New York Times placed an ad during the Oscars to tell us that the truth is more important now.

The truth is that the truth didn’t matter to The New York Times then as much as now—because as long as liberals were “progressing,” the truth was depressing.

America has stopped looking to The New York Times for the truth, now more than ever.

The times are burning and the media elites have been caught holding the match.

I’d rather crawl on my stomach over hot coals covered with broken glass. Yeah, that’s the ticket.

I think that pretty much sums it up.

“Why didn’t the truth matter when Obama was in office?…”

Doesn’t that sound great? – When Obama “was” in office?

Like the joke:
An old man comes up to the guard in front of the White House and asks to be let in to talk with President Obama. The guard responds, “Obama is not president any more. He’s gone.” The old man thanks him and leaves.

This repeats several days until one day the guard asks the old man, “Don’t you remember coming here and asking that question before?”

The old man says, “Yes, I just like hearing you say it.”

The guard nods and says, “See you tomorrow, sir.”

Free markets are a bitch:

I read on the internet* that when a large mirror was brought out, facing the audience, it received a 6 minute standing ovation. They are really into themselves.

*The Onion maybe? More reputable than “The Times.” Every now and then, to honor the late Mrs. Mary Elizabeth Anania Edwards, I buy a copy of The National Enquirer.

I agree that the truth matters, at any time.

I read the New York Times articles about the election before DJT won. I contrasted what they said he said, with his actual words.

The New York Times has a veracity problem. The truth was and is important, and for that reason, I have been trying to convince my local newspaper to find some other source for their political news. I also tried to get them to try for a Skype slot at the White House press conferences.

It’s such a good ad. The YouTube comments are great. “That basically summarizes it.” The NYT are liars.”

It summarizes with out verbalizing direct accusations. Let’s get direct. They overtly manipulate their coverage for a culturally “Liberal” agenda. There isn’t a scrap of liberalism left in their reporting other than the zombie cadavers of emotional appeals for uncontrolled immigration and free love. They’ve bastardized moral thought into an increasingly delusional tangent of victimhood lunacy. We now have kids getting full blown sex changes, in spite of science. They alleged war for oil under bush then ignored Hillary apparently doing the same. They threw a fit over an unfunded war on Terror and in Iraq. But now want socialized medicine and higher education? They ignore the quasi war in Ukraine. They excuse ISIS and the strategic catastrophe of Obama in Syria. They are apologists for terrorists and socialists. They cooperate with the manipulation science on several fronts… not just on homosexuality, or trans, or gun violence, or rape, or global warming, or general economics… They completely betrayed the second amendment. They betrayed Christianity and became Islam apologists. They push an illiberal autocratic culture that is in full blown rebellion with its roots. It feels as though there is one truth in “Liberalism” patricide by any means to any ends.

But really to what ends? Fundementally transform America into a social democracy? Alex Jones’s Globalists theory? Are they trying to fight for libarlism in an age of deep propaganda? Have they lost their way in the new internet age?

Yes, I’d rather jump naked on a huge pile of thumbtacks
Or stick my nostrils together with crazy glue
I’d rather dive into a swimming pool filled with double-edged razor blades
Than spend one more minute with you

Always liked that one. 😉

Trust me, eating a live frog is no treat either.

Well, I am fortunate in that I can read the New York Times without paying a nickel to support them. I have a neighbor who gets it and I get it from the recycling bin. I also watch CNN and MSNBC when I feel inquisitive, follow Yahoo News/Huffington Post on the net and I have a lifelong leftist friend who delights in sending me stories and clips from the far-left press, thinking that sooner or later I will see the “light”. So I have a very good idea of what the MSM is doing on a daily basis. As a retiree, I have the time and truly revel in seeing how they all spin the real facts into some story that conveys the exact opposite implication. There is some total fabrication, of course, but the principal way they craft their propaganda is just as Goebbels did it: ignore facts not consistent with your views unless impossible to ignore, always find some angle or fact making the opponents look bad, which will “explain” those unfortunate facts, and always make every story about the chosen enemy–then, the Jews–now, the conservative white male or the police. Give the devil his due–they are very good at it.

To The Media: It’s Time To Get Your Groove Back

Haven’t you been listening? The Obama administration has been a completely scandal-free 8 years! The media would never lie about something like that!