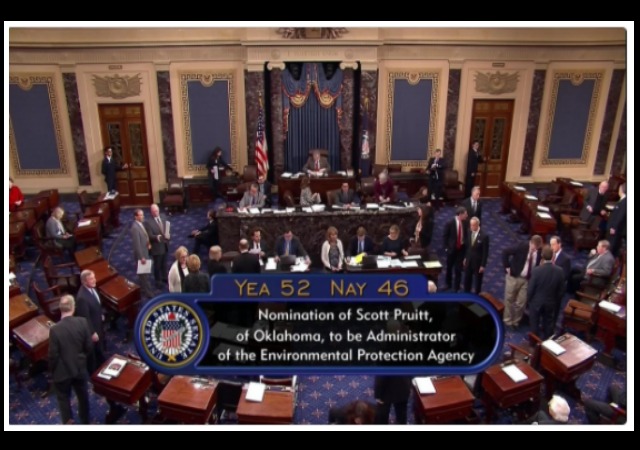 The Senate has confirmed Oklahoma Attorney General Scott Pruitt to lead the EPA with 52 yes votes and 46 no votes.

The Democrats spent the majority of the debate arguing about the catastrophes that will occur if Pruitt becomes EPA director. But instead Pruitt wants to return a lot of environmental power back to the states:

Upon Mr. Pruitt’s confirmation, the Trump administration intends to waste little time issuing directives scaling back high-profile EPA regulations, including a rule cutting carbon emissions from power plants and another bringing more bodies of water under federal jurisdiction, according to several people close to the administration.

Former President Barack Obama mounted an ambitious push to enact rules aimed at the environment, especially climate change, during his last years in office. The next few years are likely to see an all-out war over how much of that legacy will be preserved, including U.S. participation in a landmark climate change accord reached in Paris in 2015.

The Democrats also brought up that Pruitt has sued the EPA numerous times. They fail to realize that he did so on behalf of oil companies in Oklahoma. Those are the same oil companies that provides jobs for the majority of Oklahomans. Without the energy industry, Oklahoma could not survive.

12:55PM EST: The Senate is currently voting to extend the debate until next week. I doubt they will get the majority.

Yesterday, employees at the EPA have asked senators not to confirm Pruitt to lead the the agency. The New York Times reported:

“Mr. Pruitt’s background speaks for itself, and it comes on top of what the president wants to do to E.P.A.,” said John O’Grady, a biochemist at the agency since the first Bush administration and president of the union representing the E.P.A.’s 15,000 employees nationwide.

Nicole Cantello, an E.P.A. lawyer who heads the union in the Chicago area, said: “It seems like Trump and Pruitt want a complete reversal of what E.P.A. has done. I don’t know if there’s any other agency that’s been so reviled. So it’s in our interests to do this.”

So with Pruitt in charge what does that mean for the disgruntled employees? Hell:

“What it means is that it’s going to be a blood bath when Pruitt gets in there,” said Christine Todd Whitman, a Republican former governor of New Jersey and the E.P.A. administrator during the first term of President George W. Bush.

Thing is, Pruitt wants to hand more power back to the states. What a concept, eh? Because we all know that the EPA has done a stellar jobs with environmental disasters….it has caused.

Cantello, who I mentioned above, has spent the majority of her career at the EPA. She concentrates on cleaning pollution in the Great Lakes. But now she fears all that work “will be abandoned.”

I’d really like to know why it’d be so bad for the states that border the Great Lakes take care of those lakes. Why must a federal agency do it?

Take the entire Agency with the exception of a loyalist transition team, divvy it up proportionately, and give the pieces sans federal land in DC to the states, along with the employees. How many states do you think would retain their “fair share” of the agency in employment? How many would retain any of them? It should be theirs to decide.

Federal employees are “un-jobs”. Each one negates the productivity of an employee in the private sector, only with much better benefits. States cannot print money to bail themselves out of debt, and so must live within their means. Therefore, they are incented to limit state employees to the number needed to perform the important functions. If they don’t? Their problem. If you live in a state that doesn’t? Leave for a better state.

It’s kind of amazing that the Democrats put all of their real energy into fighting DeVos at Education and Puzder at Labor. Lets you know that the Unions still call the actual shots with the Senate Dems, since those are the two departments that affect them most directly.

However, in terms of day to day impact on this country, Pruitt might have an even bigger effect than Sessions as Justice. If Democrats had ever thought about this seriously, they would have used everything they had to try to stop him. Heh heh heh.

There may be some good parts of the EPA to keep, but most of the functions can be sent back to the states. It will be important to reverse the regs, then the laws and clean up what’s left. Decide who supervises what’s left. Sell the desks and buildings.

Concerning the Great Lakes – it would be nice to be able to work with Canada and other countries to keep the GL clean. Superior, Huron, Erie and Ontario as well as Lake St. Clair and a few rivers have US on one side and Canada on the other.

Such coop programs exist, have for decades.

The EPA is one of those agencies that makes it impossible TO DO THINGS in the United States. Not difficult, impossible. It’s killed off American-Can-Do.

Eliminate it and find a better way.

Other agencies and commissions have done so as well. Justice telling you who to hire; the IRS hovering over you with tax laws so complex no one understands them…

Yes! This was the appointment I was looking forward to the most.

Now he needs to start taking it apart.

Same Here! I even woke up in the middle of the night, scared from dreaming that some last minute bumfukkery had derailed it.

This is the climate realists D-Day – the Beginning of the End of the Warmists!

I wonder how many “scientists” will now start saying that they only became believers because of the money. But, they really didn’t mean it.

If so, we have a list of who not to fund.

Search thru all correspondence and computers for criminal behavior including collusion and money laundering thru friendly suits. Then burn the agency to the ground. Send out the personnel in rough cloths and no papers or computers. Fly them to Fairbanks for permanent assignment if they refuse to leave. Assign clean up tasks to States with a single block grant weighed by population/area/and industry.

Wouldn’t you know, just as the final “yea” vote was cast a huuuge power anomaly hit the EPA which took down and rebooted all the servers system-wide. Not a shred of email or documentation left….

Damn I guess every program which doesn’t have complete documentation should just be completely canceled and illuminated now. Drat.

notamemberofanyorganizedpolicital in reply to rdm. | February 17, 2017 at 2:28 pm

Now you’ve got the idea.

notamemberofanyorganizedpolicital in reply to oldav8r. | February 17, 2017 at 2:30 pm

But Oldav8r, “E-documents are forevah!”

In fact I think Shirley Bassey is doing a remake of “Diamonds are Forever” but substituting the word Email, or E-documents.
Snark.

I’m sure that there are some people out there that have the real, unchanged data available for putting back into the system.

Just so much winning!!!!

Apparently, the Left is worried about clean air and water for survivors of their final solution (e.g. abortion rites) and their [class] diversity camps.

It will be greatly reduced – in the proper time. Pruitt has to get rid of all the bad regs and bad laws before he can shut it down. We don’t need any “starter” remaining to let the Ds restart the programs. (the starter refers to baking where you have some old dough remaining, able to act as yeast for new bread)

Progressives don’t believe in federalism, though with Trump they may end up changing their minds.

They don’t want power returned to the states because it is their belief that if it is good for progressives, it is good for the entire country. I think they have a very justified fear that if state are permitted to “do their own thing,” that the red states will fare far, far better than the blue.

And Pruitt may be one of the most important cabinet picks. I am so glad he was approved.

Someone please tell Collins that Maine isn’t nearly as Communist as she thinks it is.

YEA! The only bad thing is that Oklahoma has to find a new AG to fight for its rights.

Remember to call your Senators to thank them for voting for Trump’s cabinet. If they didn’t, call them to complain. Heck, just call them on any issue – the more they hear from you, the more they will respond.

Also, if OFA starts going after townhalls, the Rs may start to do things differently. I discovered that you have to live in congressional districts in order to send emails on the .gov sites – makes sense. Will the Rs start to go to online townhalls, or show you id to get in, or whatever.

I have no problem with restricting who goes to townhalls since I want to be able to talk with MY senator or congressman. I don’t want someone from another state be given the right to talk over MY voice.

This by itself is a serous impediment to affordable government. (By affordable I mean something which doesn’t consist entirely of endless deficits and catastrophic debt.)

Anyone who could do something about these mysterious “rules” would earn his place in the history books.

If a function/program that is eliminated because the underlying regulation & law is eliminated, it seems that the employees who dealt with the program should be RIFed. Right??

Today is a good day!

Congratulations Mr. Pruitt, I wish the greatest of success in reigning in this rogue agency and bringing it back in line with it’s original mission!

Let’s hope that Fallin appoints a good replacement for Pruitt.

This could get interesting. A post from American Thinker back in November.

The New York Supreme Court has ordered Attorney General Eric Schneiderman to turn over a document containing a secret agreement with other states and environmental activist groups regarding the witch hunt being carried out against Exxon and other climate skeptics.

What a way to start the weekend. Can’t wait for the executive orders coming. Maybe now we can start putting an end to the child abuse that is one of the sinister affects of the globe warming/climate change scam. Winning!!

Pruitt has so much to do and so many Obama insiders to try to block him.

When he gets the time, Pruitt should send all the recalcitrant EPA employees to go clean up the Colorado river they polluted – clean it up by hand.

If they claim the yellow water they filled with poisons is okay (like they told the Indian tribes whose lands they destroyed) make them drink the water. Or be fired.

And reopen the whitewash that said the EPA did nothing wrong.

He may not be able to “fire” federal workers, but he can eliminate their jobs.