Manchin only Democrat to vote aye. 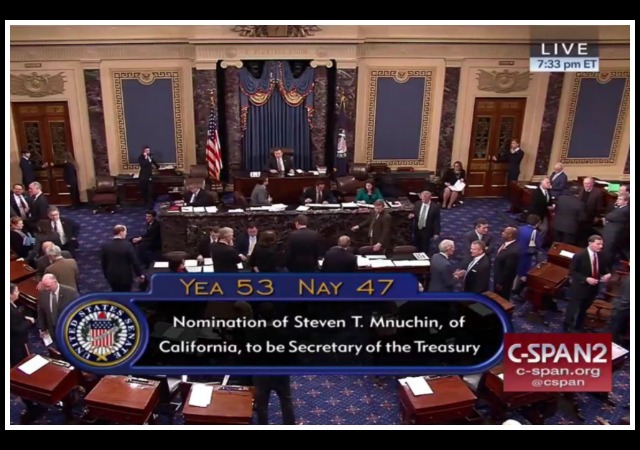 As expected, all Republicans voted for Mnuchin. It was expected to go down party lines, but West Virginia Democrat Senator Joe Manchin voted yes as well. The vote ended 53-47.

Mr. Mnuchin faces several immediate tasks. The government’s borrowing limit is suspended through March 15, after which it must be raised or suspended again. Independent analysts believe the department can use emergency measures for a few months to prevent the country from being unable to pay certain bills.

On the international front, the Treasury Department will be at the locus of decision-making on any changes to sanctions, including against North Korea following a ballistic-missile test last weekend. And officials will prepare this spring the semiannual report to Congress that would identify whether U.S. trading partners, such as China, are manipulating their currencies.

Mr. Mnuchin will also need to ramp up hiring at the agencies for dozens of appointed positions, many of which require Senate confirmation that could keep those slots vacant for weeks or months.

The Democrats adamantly opposed Mnuchin’s nomination, even boycotting both Senate Finance Committee hearings to advance the final vote to the floor. The Republicans met privately and changed the rules to advance the vote. Usually a committee needs at least one from each party to vote.

If they confirm Mnuchin, he will be sworn in during the 8PM hour.

Democrats have expressed their disdain for Mnuchin on Twitter:

Trump’s pick of Steve Mnuchin to run the Treasury shows he wants to cater to the same Wall Street executives that hurt working families.

I'm not confident Steven Mnuchin will be an advocate for working families & their financial security. Will oppose his nomination today

Steve Mnuchin doesn't seem to understand that a pension is a promise. Watch my speech opposing him as Treasury Sec: https://t.co/dEe0uDGLzD

The democrats are really looking like the spoiled little children they are.

Not thrilled with another Goldman exec in this role.

But if anyone can make me like it, it’s the unhinged rants of the left.

Certainly nothing particularly positive here. I wonder if Mark Calabria will help with the Audit the Fed effort.
https://twitter.com/MarkCalabria/status/686634579420143618