Attendants have helped many victims. 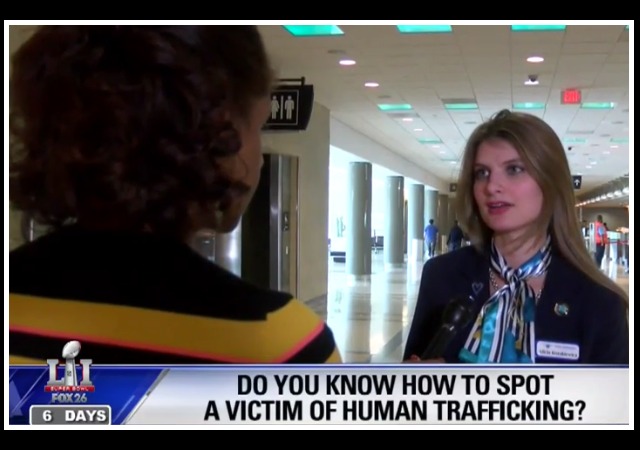 Back in 2011, flight attendant Sheila Frederick saved a teen girl from human trafficking on her Alaska Airlines flight after she noticed something just was not right.

Frederick said the teenager “looked like she had been through pure hell” and had greasy blonde hair. She also noticed the teen had “a well-dressed older man” as a travel companion. When she tried to converse with the two, the man became defensive. Frederick knew she had to do something.

“I left a note in one of the bathrooms,” Fedrick said. “She wrote back on the note and said ‘I need help.'”

Fedrick says she called the pilot and told him about the passengers, and when the plane landed, police were waiting in the terminal.

Frederick has even kept in touch with the teen she saved:

As for the teen Frederick saved, she has talked with her a few times over the years.

“I put my phone number on the note that I left for her and I guess she memorized it, so a few weeks later, she called me,” Frederick said.

A mile high mercy for the teen, who Frederick says is now attending college.

It turns our former flight attendant Nancy Rivard founded Airline Ambassadors which trains airline employees “how to spot the signs of human trafficking.” Frederick’s case is just the latest, but Rivard’s cause has saved thousands of humans:

U.S. Immigration and Customs Enforcement arrested 2,000 human traffickers and identified 400 victims last year. Since 2009 Airline Ambassadors has been working to make sure that when a trafficker flies with a victim, the flight crew is trained to spot and report them.

Last week Rivard and several of her colleagues flew to Houston to meet with approximately 100 flight attendants who volunteered for the Airline Ambassadors training session on how to recognize human trafficking.

The sessions included hearing from victims:

Over two days, former victims related their experiences to the flight attendants. In-flight crews were taught to look for passengers who appear frightened, ashamed or nervous; people traveling with someone who doesn’t appear to be a parent or relative; and children or adults who appear bruised or battered.

They’re also taught to notice if someone insists on speaking for the alleged victim, doesn’t let them out of their sight or becomes defensive when questioned. Victims sometimes appear drugged.

But attendants must remember not to do too much because they could endanger the victim and themselves. The attendants must call the pilots in the cockpit, who then call into the destination so authorities can wait to nab the perpetrator.

The group has also asked Congress to require “flight attendant training on all airlines in the United States.” From NBC News:

Airline Ambassador Sandra Fiorini, 69, testified before Congress in 2010 about trafficking she witnessed during her 42-year career as a flight attendant with American Airlines, including girls she suspected were trafficked after flying from Moscow to the United States under the guise of becoming actresses and models.

But Rivard and Fiorini continue to lobby Congress for better awareness training for flight attendants.

Good for them. These are excellent pointers for all us, though. Maybe we can also help human trafficking victims as passengers.

So, profiling does actually work 🙂 Nice to know.

Just like so many well-meaning articles, they disclose the triggers for the authorities to notice and respond to. Guess who else will read and learn from these disclosures? Just like obama did with the material obtained from the Bin Laden raid, this article will help traffickers in the future by employing these techniques with their victims. Do we have to always reveal all that we know?

Just got back from Disney World. I was unable to spot a single camera in what I know to be one of the highest surveyed places on the planet. I did find the K9 unit presence to be interesting though.

WRT the article above- there’s no secret sauce to common sense. Apparently slave traders see so little resistance and so much apathy that they are able to operate hiding in plain site.

Adults in several walks of life should be alert to child abuse and exploitation.

I was at the hospital with a sick kid one time, and I was waiting in one of the labs, when a lady doctor ducked in to collect herself. Something was obviously wrong, so I asked her what happened. She said that she had just seen the X-rays for a little boy who had a bunch of greenstick fractures — a sign of child abuse. She was young, and a nice, India-indian, and visibly horrified.

She said she would have to report it, and I said, yes, because sometimes it can make a serious difference. I asked her if she needed a witness, because having somebody else in the room can often calm things down. She said no, they had people available to take care of that, and then she seemed to start thinking again. However it was handled, it was quiet. That little boy would be in his ’20s by now. I hope he is well and happy.