Elizabeth Warren Blasted for Putting Illegals Ahead of Veterans

Elizabeth Warren Blasted for Putting Illegals Ahead of Veterans

“We need to take care of veterans first” 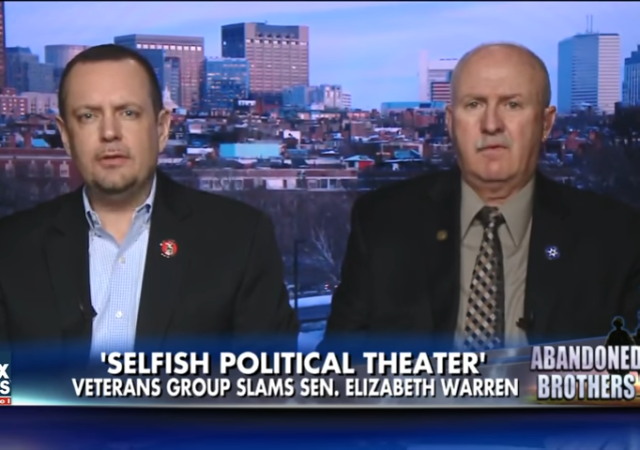 A veterans group in Massachusetts is criticizing Elizabeth Warren and others for seeming to care more about illegal immigrants than vets.

The group, Veterans Assisting Veterans, suggests that Warren’s support for illegals is political theater and that vets are suffering as a result of neglect.

A local veterans’ advocacy group is blasting Massachusetts U.S. Sen. Elizabeth Warren and other state Democrats for their support of illegal immigrants, calling it “selfish political theater” and demanding they put veterans’ services at the top of their list — or feel the heat.

“We’d like to see our leaders re-examine their priorities, put this at the forefront — if we have to, we’ll knock on some doors in D.C.,” said John MacDonald of Veterans Assisting Veterans. “We need to take care of veterans first before we decide to take care of people who are illegally here.”

In a two-page open letter to “all Americans,” the group — which has funded all-terrain wheelchairs for local vets as well as horse therapy at Ironstone Farm in Andover — slams the “selfish blatant ignorance of the politicians that have chosen illegal immigrants over US Veterans” and calls for readers to support VAV’s cause.

Here’s an excerpt from their letter:

We as an organization are deeply troubled by the continued lack of prioritization by some prominent elected members of our government. Imagine that while US Senator Elizabeth Warren organized rallies to support illegal immigrants seemingly overnight, our nations veterans have been severely suffering from an underperforming veteran’s administration for decades. Imagine while the Democratic leadership of the United State Senate finds new ways to excoriate the President on a travel ban, none have stood in front of those microphones or called national media to demand that veteran homelessness be eradicated or that veterans suffering from chronic illnesses receive the same health care that Congress enjoys themselves. Especially when most veterans have risked and done more for their country than most members of Congress or the Senate.

Two representatives from Veterans Assisting Veterans appeared on FOX and Friends this weekend to discuss the issue. Watch the segment below:

She deserves this criticism.. and how.

Veterans are the one segment of the U.S. population that has a very binary history – we are either loved or hated. For example, during John “I served in Vietnam” Kerry’s Winter Soldier campaign, Vets were encouraged to make claims about the military abuse in Vietnam. Many news accounts praised these heroic men as speaking truth to power.

The advent of the Internet now takes the MSM monopoly away and gives ordinary people (what the Democrat Party calls ‘deplorables’) a voice. Phoney valor is much harder to accept.

Along that line, the Senator from ‘Taxachusetts’ is wrong to put illegal immigrants in front of Veterans. Would that Robert Heinlein’s ‘Federal’ state, where only Vets can vote or hold office, be true.

This has been a long time problem with modern democracies – Rudyard Kipling commented on it a couple generations ago.

You talk o’ better food for us, an’ schools, an’ fires, an’ all:
We’ll wait for extry rations if you treat us rational.
Don’t mess about the cook-room slops, but prove it to our face
The Widow’s Uniform is not the soldier-man’s disgrace.
For it’s Tommy this, an’ Tommy that, an’ “Chuck him out, the brute!”
But it’s “Saviour of ‘is country” when the guns begin to shoot;
An’ it’s Tommy this, an’ Tommy that, an’ anything you please;
An’ Tommy ain’t a bloomin’ fool — you bet that Tommy sees!

He actually wrote an even better one, “The Last of the Light Brigade”, in 1891.
https://www.poetryloverspage.com/poets/kipling/last_of_brigade.html

“There were thirty million English who talked of England’s might,
There were twenty broken troopers who lacked a bed for the night.
They had neither food nor money, they had neither service nor trade;
They were only shiftless soldiers, the last of the Light Brigade.

They felt that life was fleeting; they knew not that art was long,
That though they were dying of famine, they lived in deathless song.
They asked for a little money to keep the wolf from the door;
And the thirty million English sent twenty pounds and four!

They laid their heads together that were scarred and lined and grey;
Keen were the Russian sabres, but want was keener than they;
And an old Troop-Sergeant muttered, “Let us go to the man who writes
The things on Balaclava the kiddies at school recites.”

“No, thank you, we don’t want food, sir; but couldn’t you take an’ write
A sort of ‘to be continued’ and ‘see next page’ o’the fight?
We think that someone has blundered, an’ couldn’t you tell’em how?
You wrote we were heroes once, sir. Please, write we are starving now.”

The poor little army departed, limping and lean and forlorn.
And the heart of the Master-singer grew hot with “the scorn of scorn.”
And he wrote for them wonderful verses that swept the land like flame,
Till the fatted souls of the English were scourged with the thing called Shame.

O thirty million English that babble of England’s might,
Behold there are twenty heroes who lack their food to-night;
Our children’s children are lisping to “honour the charge they made –”
And we leave to the streets and the workhouse the charge of the Light Brigade!”

She is wrong to put illegals in front of ANY American, but especially vets.

An enjoyable piece. They were little unpolished. Definitely showed an earnest embrace of fraternal patriotic us first. Honest people. You have to love this. They represent everything Warren could never show or be.

Scanned the front page of Bostonglobe.com the past few days and haven’t seen a word about this. The Globe is now marketing itself with the tag line “Real Journalists. Real Journalism”.

Advocacy is Not Journalism. Ignorance is Not Strength.

Might be time to rally veterans to the flag again. Just give us enough of a heads up so that we can notify our work that we will be taking a vacation day, don’t want to screw over the companies that employ us. I honestly think that with the right planning and message it would be fairly easy to get over a million veterans to show up and in formation to let the civilian paper pushers know we mean business.

Great point about the veterans deserve the same healthcare as congress. I’m covered through my company and pay out the ass for my family but a lot of these guys just get pushed into a corner by the VA and that’s not right.

Include John McLame is that sorry ass bunch too.

Pocahontas is running for POTUS in 2020 and this is one of the places where Demo’s are the weakest. They are putting the funding of third world immigration ahead of veteran’s causes, our own homelessness epidemic, intercity and urban decay and a laundry list of infrastructure improvement needs (roads, bridges, etc.).
The left is so elite and Nobel to take in people from other countries who do not want to stay and fight for their own freedom. In school, nothing was taught about the need for boat lifts or immigration to other countries during the US revolutionary war. Safe zones in their own countries is the proper way to handle refugees.

They are right, we do not honor our Vets. The left could care less, they know they won’t win their votes for the most part.
It is time for a million Vet march

I can’t blame Warren too much for this, after all she gets more votes from illegals than she does from veterans

Agree with PackerBronco. Warren is simply following the current post 2016 Den playbook which has doubled down on dividing by a few keys classes progressives have isolated. Those classes are defined mostly by race and gender. It’s not clear to me yet if they plan to group Muslims as a race category. Maybe they eventually isolate ONE religion as aggrieved but not all. So it becomes 2.5 isolated/aggrieved groups to pander to. Veterans don’t fit. And aren’t their likely voters in their minds.

Fauxcahontas is a corrupt fraud. And those are her good qualities.

She’s off the reservation.

I guess “blasted” would just be a figure of speech.