Dominican-American of African descent shut out of Congressional Black Caucus

Dominican-American of African descent shut out of Congressional Black Caucus

How black is black enough for CBC? 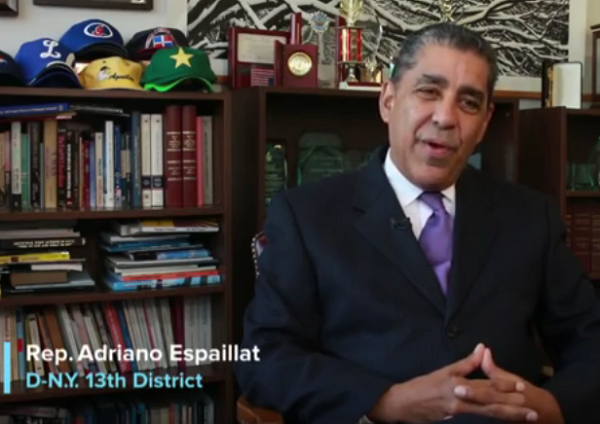 We might think, based on the Rachael Dolezal case that one can just identify as whatever race one wants, just as progressives expect people to pick their gender from a long (long) list of choices.  And we might be right.  Or we might be wrong.  Who knows?  Certainly not the CBC.

Rep. Adriano Espaillat wants to join the Congressional Black Caucus. The question for the group’s members is whether he qualifies as African-American.

So far, the answer is no.

Espaillat, who in November became the first Dominican-American elected to Congress, identifies himself as a “Latino of African descent.” The CBC has a long-standing policy of limiting its caucus to African-American members, denying membership to white lawmakers in the past who have tried to join, even if they represent majority-minority districts.

The New York Democrat hasn’t formally asked to join but has been in discussions with CBC leadership. Espaillat has already joined the Congressional Hispanic Caucus.

Espaillat faces another problem in that he twice challenged Charlie Rangel for his seat prior to Rangel’s retirement and Espaillat’s subsequent victory.

Rangel, himself part Hispanic, founded the CBC, so some members are chafing at the idea of welcoming Espaillat into their ranks.

. . . .  There’s also another problem for the freshman lawmaker. Some CBC members are angry that Espaillat challenged former Rep. Charles Rangel — a founding member of the black caucus and one of the most high-profile African-American members of the House for decades — in 2012 and 2014.

Now they’re not feeling particularly generous toward Espaillat, who won the seat after Rangel retired.

While Rangel disavowed his Puerto Rican father and rejected his Hispanic heritage, Espaillat has not and has already joined the Congressional Hispanic Caucus, another point of contention for the CBC.

. . . .   Espaillat rankled some CBC members because he tried to join the caucus while simultaneously being a member of the Congressional Hispanic Caucus, something members say has never happened before and could be politically motivated.

Espaillat’s district, while majority Latino, has a sizable African-American population and includes Harlem, long the intellectual and cultural center of black America.

“See that complicates matters. Even though our agendas are typically parallel, occasionally they are not. So it may be problematic if someone wants to belong to two ethnic caucuses,” said. Rep. G.K. Butterfield (D-N.C.), a former chairman of the CBC. “If he’s considered an African-American then he’s certainly welcome in the caucus. But I can’t speak for the caucus.”

The problem is that many Hispanics do identify as more than one ethnicity, and Espaillat, who describes himself as a “Latino of African descent” falls into the identity “category” of Afro-Latino.

Ironically, this is a category into which Rangel himself would also fit . . . if he wanted.  Which he doesn’t.  So that brings us back to the original question facing the CBC:  is Espaillat black?  Is he black enough?  Or is he Hispanic?  Can he be both?  Does he get to decide his own ethnic identity (as Rangel did)?  Or does the CBC?

Watch this short compilation by NBC celebrating Espaillat as both the first former illegal alien and the first Dominican-American sworn into Congress:

The CBC has never worried about being unfair.

When Black Republicans try to join, they are rejected because they are Republican, not because of their race.

The CBC should be ordered disbanded immediately. The new justice department should determine how many laws they are breaking just by their existence.

I wonder what the head of the Congressional White Caucus has to say about this. Oh, wait.

notamemberofanyorganizedpolicital in reply to JOHN B. | February 4, 2017 at 3:21 pm

Does the CBC apply the infamous “grocery sack” requirement?

I agree 100%. No such organizations based on any ethnicity should exist within the United States Congress.

Your opinion (or mine) on whether they should exist is irrelevant. The only opinion on the subject that matters is theirs, and they clearly think they should exist, so they do. I hope you’re not suggesting that they shouldn’t be allowed to exist.

Um, they’re not breaking any laws. On the contrary, there can’t be any laws against their existence. Ranting about such laws only discredits you as an ignorant fool and makes them look good.

Ah, the internal contradictions of identity politics are things of beauty. The irony of this coming from alleged ‘progressives’ is bittersweet.

The CBC’s existence serves only to perpetuate racial division and animosity. If its members were truly devoted to equality of all races, they would disband.

The obvious question is, what is a “former illegal alien”? Is that sort of like, say, Charles Manson, a former crazed killer?

heh. I wondered about how he went from illegal to legal, as well. It turns out that it was more like legal to illegal to legal: his parents came here, overstayed their visas, then went back to establish US residency, and earned their green cards.

Here’s the Fox report on that part of Espaillat’s story: http://www.foxnews.com/politics/2016/07/06/espaillat-american-dream-has-taken-him-from-undocumented-to-likely-us-congress.html

“The problem is that many Hispanics do identify as more than one ethnicity, and Espaillat, who describes himself as a “Latino of African descent” falls into the identity “category” of Afro-Latino.”

Correct, because even the Census form ask “Are you Hispanic/Latino” and the next question is “What race group you belong to”. Like Espaillat I was born in the Dominican Republic and I’m black. If I wanted to play the ethnic game the liberals are so fond with I could say I’m both black and Hispanic. Anyway, pass the popcorn…. this is going to be very entertaining….

Oddly, Barracula never had the problem of being too white to be black.

It’s all so post-modern and “relative”…

If he’s not “African American” then neither is former president Obama, which underscores the point that this is a political caucus, not open to anyone with different viewpoints without regard to ancestry.

Actually, Barracula was one of very few real “African-Americans” ever. NTTATWWT.

Actually, there are lots of them. Likewise, NTTAWWT.

Like my nephew’s wife. Born and raised in Tanzania and white as a bedsheet.

She loves to check off “African-American” on any and all applications.

Sorry, but I’m out of the loop here: who’s Barracuda…?

I think it’s a reference to his “spread the wealth” commie agenda that sucked the life (blood) out of the middle classes.

Yeah, I don’t care for the term, either. Nor do I care for the practice of counting drops of blood to determine “race.”

Always good to see members of Congress focused on the important things.

But wait. There can be white Hispanics, why can’t there be lack Hispanics?

And the CBC is saying that political issues at the Congressional level are determined according to the color of the skin of the people represented?? What about the content of the character we used to hear so much about?

I’ll have to ponder this for a while…

Careful, you’ll get a headache!

The Germans had people trained to identify racial purity. Maybe, if any survive, they could work with the CBC to see who is and who isn’t part of the massa race.

On its face, the CBC is a racist club. Anywhere in America, a club or organization which excludes membership on the basis of race is racist, and lawsuits have resulted. Have you ever heard of the Congressional White Caucus? Such a group would have to admit blacks or be labeled racist, and penalties would accrue. In my 70 years of experience, I have never seen a mainstream group more racist than American blacks.

Private organizations that do not provide public accommodations are perfectly entitled to discriminate any way they like, and there has never been a successful lawsuit against such a group.

Yes, the CBC is a private organization, of course, just like the Republican and Democratic caucuses, the “Progressive” Caucus, the Freedom Caucus, etc. What else could it possibly be?

I think I’ll get my tests done at Ancestry and see what I’m missing out on!

notamemberofanyorganizedpolicital in reply to JoAnne. | February 4, 2017 at 3:28 pm

“NOW, You Too Can Get a Free Scholarship to, and Later a Job at Harvard Law School!”

The “Congressional Black Caucus” is a parody of itself.

A corrupt, substantially racist, and always leftist group of the post pathetic people ever to hold federal office.

Founded by PJOAC Rangel. So, as expected.

They told me if I voted for Trump that violent mobs would run wild shutting down speech they didn’t like and that racial-purity tests would make a comeback…(and they were right).

True identity politics is more than skin deep. It’s how you think first and color second. But BOTH are required.

Looks more Cherokee to me.

In other words, he is a “Black” Hispanic.

If only he were Black, Latin, Gay, Transgender, Muslim…then there wouldn’t be any way to stop him or her or z!

Wow! Former Illegal Alien. Now a U.S. Citizen and a congressman. Question: did he become legal by statutory means? was he covered in 1984 amnesty?

Another example of Black privilege. They can discriminate.

Maybe his race card was out of date.