Dems step back from the brink, but just barely as Ellison to serve as Vice Chair

At its winter convention, the Democratic National Committee just elected Tom Perez the new Chair of the DNC.

This follows a contentious fight as to whether Democrats would turn the party over to the Keith Ellison wing of the party. Full details in yesterday’s post, DNC Vote Saturday: Will Democrats become party of Keith Ellison?

In some ways, it was a replay of the Dem primaries:

If you're in the mood to relive the Dem primary, just browse this tag: #DNCChair

Ellison had the backing of Linda Sarsour, someone trying to move the party to merge Islamism and socialism into a new anti-Israel Democratic Party.

If the @DNC wants a second chance at life, @keithellison is what you need. #DNCChair

Hope the @DNC does the right thing today. #KeithforDNC

This cable news debate pretty much set up the divide among Democrats on Ellison’s history and associations.

Alan Dershowitz: Why I Will Leave Democratic Party If Keith Ellison Is Elected DNC Chairman https://t.co/SeuS51GMSB

In the first round, Tom Perez fell one vote short (214.5 needed) 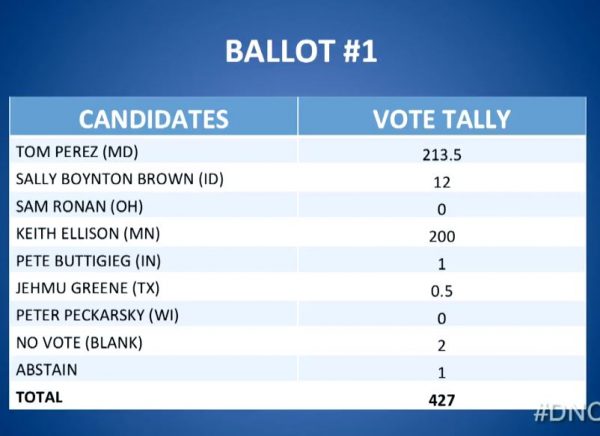 After all the other candidates dropped out after the first ballot, it came down to just Ellison or Perez. 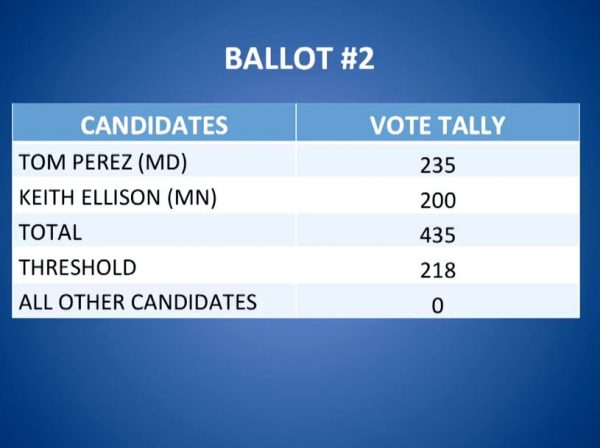 .@TomPerez & rest of clueless members who voted 4 him-50 state strategy means NOTHING if ur MESSAGE DOESN'T MATCH YOUR DONATIONS #DNCChair

What do you call it when you do the same thing over and over again and expect different results? Oh yeah: the Democratic Party. #DNCChair

What a joke. Ellison had all the momentum. This is a message to progressives that this party does not care about you. Only lobbyists https://t.co/NYlYQkWycs

The only reason Ellison lost is racism.

Also looks like the dems hate Muslims and women. They are the party of Old White People.

Something I didn’t catch before and am not positive on: If Keith Ellison had won the DNC chair spot, would he have to step down from the House? If so, Perez takes the chair while not having to step down from anything, while Ellison can keep his House position and the step-chair position.

He promised he would step down to do it full time but he wouldn’t have to.

Dead voters only get 1/2 a vote once they’ve gone from the party unlike the regular presidential election.

Sometimes a voter dies violently and only half the body is recovered.

This was big donors warning behind the scene to not pick Ellison due to indefensible baggage.

That’s some SERIOUS baggage when the Dims consider it indefensible!

“That’s some SERIOUS baggage when the Dims consider it indefensible!”

Oh, he didn’t think it was that serious. Just the old “all white people are devils, all Jews must die”, that kind of thing.

I am ambivalent about the choice of Perez.
It is healthier for a 2 party system, where one of them is not
openly antisemitic,but Ellison is going to be his assistant.

JEWS be not fooled by this selection – anti Israel attitudes will still prevail – SOROS still lives in the heart of the Donkey Kong Party.

It’s an assessment of who’s really calling the shots in the Dem party – same people as always. The activists are just window dressing sent out to do their master’s bidding.

And this now makes it much more likely that Hillary WILL run again in 2020 – Perez has always been her creature, right from the start.

The only ‘running’ Hillary Clinton will do in 2020, is via embalming fluid running out of her leaky coffin.

Dang and here I was hoping they would be stupid enough to elect Ellison who would increase the speed of their downward spiral.

The Ballot #1 vote tally looks almost like the 2016 Presidential tally.

Nobody got a majority.

The Dems couldn’t win I see. It was either Ellison and the mess that would be or Perez and now the progressive wing wants to go to war.

The thing is the Dems still have the teacher’s union and the public sector unions for foot soldiers and they are probably better off being represented say door-to-door or on the phone by them. The wacko progressives will come along because their cult master Obama will emerge and tell them to do so. The zombies will line up and serve once again like in the past. They still have no message though.

Well, dang it all. Perez will be viewed as serious and legit because he was part of obastard’s team. I had really hoped that Ellison would make the cut because his lunacy is far more obvious than Perez’s. Ellison comes off as a loud-mouthed, whacked-out muzzie whereas Perez seems more rational and measured. Perez is far more likely to be taken seriously and believed by the useful idiots.

Still, Perez lacks the charisma thing that Ellison has a bit more of. I’d bet 80% of the US is saying, “Tom who?” Perez will come off as bland compared to Ellison. He’s got his baggage too. As I (vaguely) recall, he got caught lying and pulling dirty tricks when he worked for the DOJ. That’ll be brought back up. Since there is no Dem president to give him cover, Perez will be vulnerable to inside fighting w/i the Dem party (as would have Ellison). Because of his record of inflammatory rhetoric, the media would shadow Ellison 24/7, giving him constant exposure. Perez? Not so much.

Ellison would have been much better for conservatives, but Perez is just as much a loony lefty, and we’ll get occasional useful soundbites from him.

I’m familiar with Tom Perez because I used to live in Montgomery County, MD. He was one of the people who pushed for casino gambling for the state, basically pitching it as free money for schools and free tax revenue for the government.

Of course there’s no such thing as free money, so these downscale casinos just marketed to local lower class workers and retirees, some of whom were desperate enough to become the problem gamblers that make up 40-60% of a casino’s revenue. Once hooked, they keep going until they’ve maxed out their credit cards, and then declare Ch 7 bankruptcy.

After that “success”, he was hired by the Obama administration as a civil rights lawyer, where his job was basically to do stuff like sue bakers who won’t bake a wedding cake for a gay couple. Actually, I don’t know if he did that specifically, but a list of his cases does include stuff like suing private schools for “gender identity” discrimination, investigating Joe Arpaio, fighting the voter ID law in DC, etc.

sorry, that last line should be “fighting the voter ID law in SC”.

One thing that the Perez victory portends is that there will be no need for anyone to primary hillary if she decides to run again. Perez was more in her debt than DWS ever was. He will try to make it look fair but everyone will know that the fix is in.

He has never run for anything higher than town councilman, he has no base of support, he has no constituency of his own. He is a creation of the Clinton Machine; they created him, they promoted him, and they on him. Without them he would maybe have been a delegate on the convention floor, that is if he could get away from his job slinging burgers.