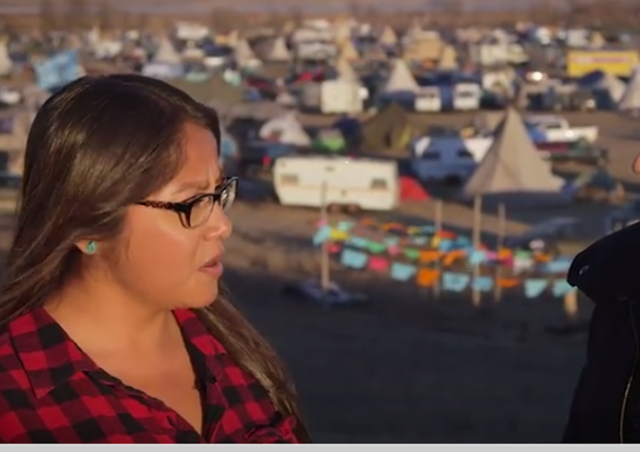 A week later, the then acting secretary of the Army instructed federal officials to issue the easement necessary to build a controversial segment of the Dakota Access pipeline.

Now, the Corps of Engineers has issued an eviction notice to the protesters who have plagued the construction of the pipeline . . . because they are polluting the environment.

The U.S. Army Corps of Engineers has given a evacuation order to those protesting at the Dakota Access Pipeline camp in Cannon Ball, North Dakota.

In a statement Friday evening, the Corps said it would close the Oceti Sakowin Camp, which sits on approximately 50 acres of Corps land, on Feb. 22 due to the “high potential for flooding” in the low-lying area.

The land sits at the confluence of the Missouri and Cannonball Rivers, which the Corps says puts it at particular risk of flooding after a winter of record snowfall in the region.

The Corps said oil erosion and pollution — which it attributed to the “unauthorized placement of structures, vehicles, personal property, and fires” on the land over the course of more than six months — could result in contaminated runoff into both rivers.

“As stewards of the public lands and natural resources, we have a responsibility to the public to prevent injuries and loss of life,” said U.S. Army Corps of Engineers Omaha District Commander, Col. John Henderson. “We must also ensure our precious water resources are free from pollution due to human activities and respect for all who rely on this water for their livelihoods.”

Even the Native American tribe leading the charge against the pipeline wants the protesters do address the contamination concerns.

The Standing Rock Sioux Tribal Council asked Dakota Access Pipeline protest camp organizers to share their plans for camp cleanup and other issues in an effort to address unsubstantiated rumors.

“I think that’s what should be afforded to my community in Cannon Ball; they need to know what’s going on on a month-to-month basis,” said Councilman Cody Two Bears during a meeting between the council and camp leaders that was live-streamed on Thursday.

…“Because of this risk of flood, we’re worried about what’s going to be left at the camp,” said Tribal Chairman Dave Archambault II. “What we want to do is make sure none of that waste gets into the Missouri River .

I am reminded of Saul Alinksy’s: Rule 4: Make opponents live up to their own book of rules.

Now that’s funny. Nothing like the environmental impact of protesting possible pollution by creating actual pollution coming to bit them.

The (sad) irony is self-evident. To be expected from the self-absorbed.

notamemberofanyorganizedpolicital in reply to Daiwa. | February 4, 2017 at 5:09 pm

They’re too busy “virtue signaling” to each other to think.

Hope they don’t try chewing gum a the same time.

The first rule of environmentalism is displacement and obfuscation, and, when that fails, projection, fast and furious. They seem too green for a front line role.

I understand that the North Dakota Treasurer wants to give state income tax bills to the paid protestors- GREAT IDEA!

The tribe, the Corps of Engineers, the pipeline company, and anyone else adversely affected also should send them a bill for the property damage.

Hmmm. This seems odd, doesn’t it?

I’m almost certain that, where I live, I wouldn’t be allowed to set up a tent city on federal land for months on end before some government official showed up and told me to move along.

In fact, guys with guns showed up in Oregon when those guys took over that shack up there.

It was never about the environment. The SJW’s who showed up with classifications as Vet’s, Water Protectors, etc. were event protesters organized and funded by Media Matters for America who chose to high-jacked the cause out of the hands of the Native Tribes. It was working up to Jan. 20th. and up to the point they were asked to leave by the tribes leaders who realized they were being used.

I’m sure things will be worked out for all involved with considerations made by all the direct parties who actually have a stake in the outcome.

The water is life. Now pardon us while a hundred hippies poop in it.

But when hundreds of Native Americans poop in it, that’s just an offering back to Nature, from whence it came, the smell merely a return of the Great Spirit.

Anyone tired of winning yet?

Broke Gopher, you are probably right that the biggest pollution of all is the fecal matter. Slit trenches are one thing but they are not a long term solution to sanitation. Especially close to a water source.

And sadly, the protesters don’t comprehend it. The chasm between their ideals and their reality.
Standing Rock and Archambault carry responsibility for this mess.

Six months of camping in an area which does not have trash disposal and sewage facilities… I have no doubt that the first flood across the area will float untold amounts of crap to the surface.