Okay, time to close the internet. 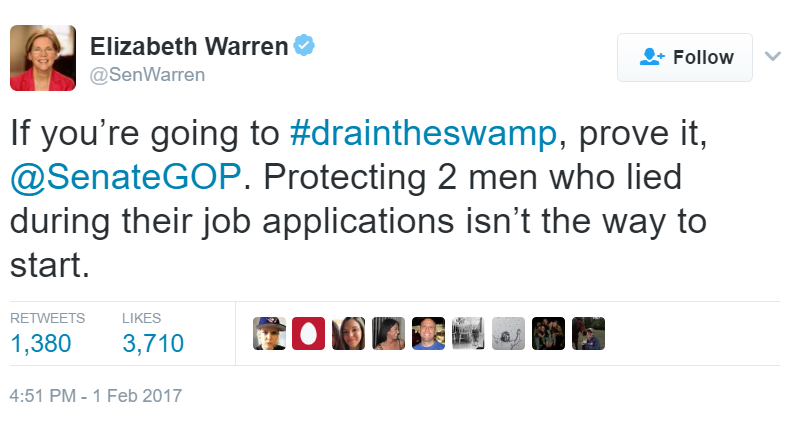 The false accusation of lying by Warren was directed at Steve Mnuchin and Tom Price. There’s no proof that they lied, but it’s good to know that Senator Warren considers lying in connection with obtaining a job is a disqualifier. 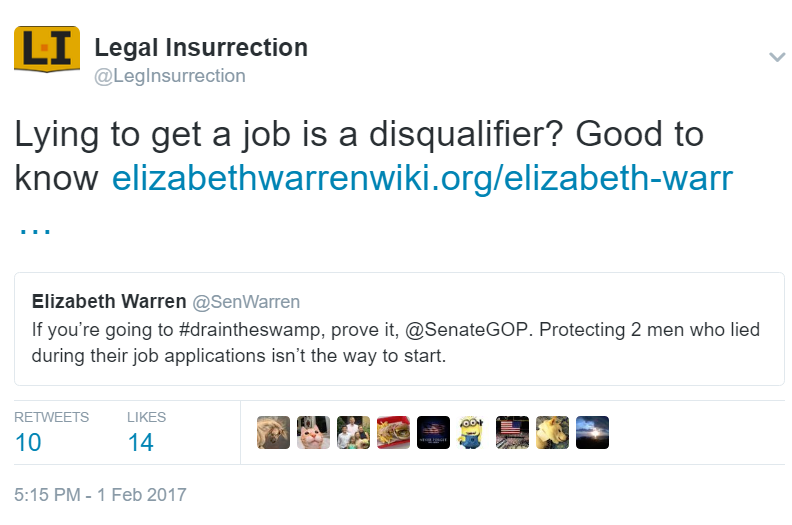 Read the whole thing. I’m sure Senator Warren would want you to. After all, she’s against people lying in order to advance their job prospects.

Even that little bit has never been proven by Warren.

Actually, that was my point. She lied about being 1/32 American Indian in order to obtain a position; the very thing she accused the two Trump nominees of.

If Ed Ames could play an Indian on Daniel Boone, she can in the biggest puppet theater in the world.

She has no native blood… period.

The 1/32 was erroneously reported in the Boston news (Globe I believe) but there is no proof whatsoever.

That was the point of my post; she did the very thing she accused the Trump nominees of. I was being ironic.

Says the fake Indian who “forgot” to mention her $1.3 million line of credit on her house . . .

So Lie-a-watha thinks lying to get a job should be disqualifying — except when she does it.

Lying Lizzie’s non-existent Cherokee ancestors must be so proud of her!

Separately, can we have Warren, like we can have more cow bell?

A perfect place to insert this little gem from the incomparable Mark Steyn!

“The recipes from “Elizabeth Warren — Cherokee” include a crab dish with tomato mayonnaise. Mrs. Warren’s fictional Cherokee ancestors in Oklahoma were renowned for their ability to spear the fast-moving Oklahoma crab. It’s in the state song: “Ooooooklahoma! Where the crabs come sweepin’ down the plain . . . ” But then the white man came and now the Oklahoma crab is extinct, and at the Cherokee clambakes they have to make do with Mrs. Warren’s traditional Five Tribes recipe for Cherokee Lime Pie.”

Squaw who speaks with forked tongue.

Fauxcahontas apparently has zero self-awareness. Wait, that’s true of liberals in general. I am far more tired of seeing her face and hearing her voice than I am surprised by this.

She has a lot of self-awareness, much like Hillary Clinton or any other crook.

Chelsea Obama, on the other hand, believes his own press.

Kowabunga, Lizzy, what up? Sounds like it may be time to introduce the Afro background, just in time for Black History Month!

Looking forward for the D’s inhabiting the back benches for DECADES!

Draining the swamp, huh? It looks like Warren is complaining about the mosquitoes, while Trump is clearing out the alligators.

That’s no way to get anyone to think you’re Presidential material.

Warren is up for re-election in 2018. There is still enough time for the GOP to develop its plan to beat her. Hope they do.

The woman living in a multi-million dollar mansion that she refuses to allow to be photographed inside and claiming to be a woman of the people said this?

The woman who was hired by Harvard Law School because she said LIED and said she was part Cherokee Indian and was (falsly) advertised as such by the school for years said this?

Irony (from Ancient Greek εἰρωνεία (eirōneía), meaning “dissimulation, feigned ignorance”), in its broadest sense, is a rhetorical device, literary technique, or event in which what appears, on the surface, to be the case, differs radically from what is actually the case.