Sanders is so hot right now. 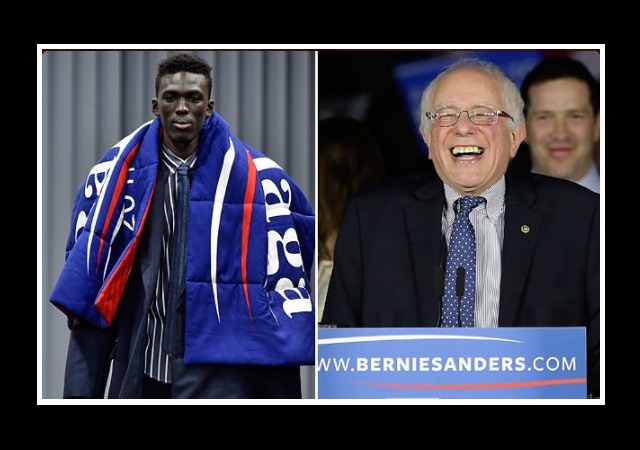 Self avowed socialist Sen. Bernie Sanders (I-VT) inspired many people during his presidential campaign against Hillary Clinton. Somehow, though, I don’t think he expected himself to inspire styles during Paris’s fashion week.

Bernie Sanders has some thoughts on this fashion line inspired by his campaign https://t.co/uVd2bZMCx7 pic.twitter.com/v4HlJRikfW

The designs come from Balenciaga, based in France, and includes “Bernie-themed haute couture such as a bomber jacket with an oversized Sanders logo on the back and a Bernie T-shirt pulled over a designer flannel and hoodie.” From Vogue:

Considering the corporate and commercial overtones of the collection, you’d be surprised to learn that Senator Bernie Sanders served as a partial inspiration. Sanders’s presidential campaign logo—the word Bernie underscored by curved red and white lines—was evoked in the new Balenciaga logos embroidered on jackets, made into pins, and printed on the shawl scarf worn with the last look. The only noticeable difference between the two is that Balenciaga’s design has three stripes and Sanders’s had just two. Still, the similarity is uncanny.

Bernie Sanders as Paris fashion icon is definitely *not* the “most unusual outcome of the 2016 presidential election.” Totally predictable! pic.twitter.com/twomQCp6jx

Bernie Sanders Got a Tribute at Paris Fashion Week https://t.co/WMfyqEySQf

On CNN’s State of the Union, Jake Tapper asked Sanders about the fashion:

“Bizarre sighting at Paris fashion week from Balenciaga. Take a look, these are a number of people, models on a runway in Bernie clothes. Did you ever think that you would become a fashion icon?” Tapper asked Sanders during an appearance on CNN’s “State of the Union.”

That prompted an amused laugh from Sanders, whose fashion tastes are more in line with Marshalls than Balmain or Yves Saint Laurent.

“Haha. No, not quite Jake. I think that of my many attributes, being a great dresser or fashion maven is not one of them,” he said.

And about time too. The last time international communism made a fashion statement, we got the Mao jacket. By now, the fashion world should be ripe for some hope & change.

notamemberofanyorganizedpolicital in reply to tom swift. | February 6, 2017 at 12:18 pm

Now you know why fashion is dead.

“The End of Fashion”

But this is my favorite Che-inspired fashion:

For a long time now, “High Fashion” has been nothing but a form of entertainment for some very odd folks, as it does not generate much of anything that turns into salable products.

notamemberofanyorganizedpolicital in reply to UnCivilServant. | February 6, 2017 at 1:04 pm

The last credible report on “fashion shows” I read, labelled them “PR.” PR of designers desperate to garner any attention – regardless of the kind of attention.

Never understood how/why the Versaces of the world became so rich. And now we have that great “Peoples” inspiration, Bernie Sanders, stepping up to make the wealthy, wealthier. Communism has always had a draw for youth and the ignorant; never able to understand that magnetism, either.

For a man that never had a steady job till age 40 and was an acknowledged horrible carpenter, handy man, how in the world did he get here?

Communism draws the young and ignorant because 1) it tells them it isn’t their fault that they are getting nowhere and 2) that communism will allow them to have rewards that they didn’t earn.