Only one sector seems poised for job loss: The American Press Corps. 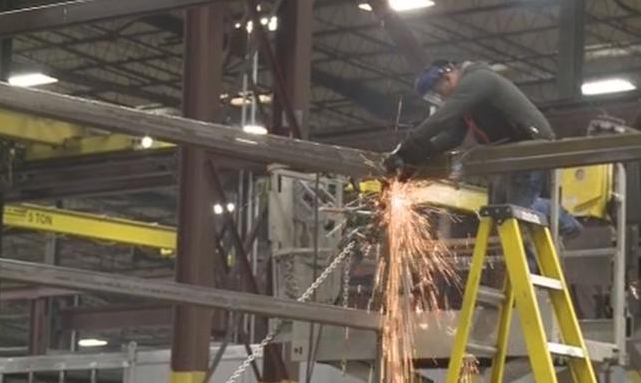 President Trump has been meeting with business leaders regularly since his inauguration, including a meeting this week. These sessions cover a wide array of topics and grew out of Trump’s December announcement of an advisory panel on manufacturing.

“Today we have 24 CEOs from the largest manufacturing companies in the country and even in the world. They represent–people in this room–nearly $1 trillion of sales and two million employees, large majorities of which are in the United States. They share our commitment to bring manufacturing back and to create jobs in this country,” Trump said.

Since Inauguration Day, Trump has made a weekly habit of meeting with heads of industry, business owners and economic advisers. The president’s C-suite get-togethers are already proving to be much more frequent than those of his most recent predecessors. In his first two months in office, Trump has gathered business leaders from a range of sectors seven times, while former President Barack Obama hosted two such meetings in his first year, and former President George W. Bush huddled with business leaders three times during his second year in the White House.

It appears that the focus on business is paying off for President Trump, as well as the nation. In recent weeks, there has been a spate of announcements related to hiring in manufacturing job sectors.

A country’s largest military shipbuilder is planning to hire 3,000 people.

The nation’s largest military shipbuilder says it plans to hire 3,000 workers in Virginia this year.

These jobs pay substantially more than barista jobs popular during the Obama administration.

Companies in the Atlanta area are planning to hire hundreds of workers.

About 500 new jobs are coming to the metro Atlanta area this year.

…Atlanta Rotomolding will be helping to launch Yeti coolers in the U.S. They are looking to fill 350 positions, mostly manufacturing positions, in DeKalb County. To apply go to atlantarotomolding.net/career-opportunity.

And one Texas manufacturer is on a hiring spree:

ACS Manufacturing in Denison has already hired 20 new employees just this past week, and they plan to hire 60 to 80 more.

…”Business is booming and we now have 340 employees. That has almost tripled in the last 24 months,” ACS Manufacturing HR Director Andrea Mory said. “With rolling layoffs at Caterpillar, we’ve taken on quite a few people from the Caterpillar family.”

Between the freeze on regulations and the willingness to work with the nation’s employers, Americans see that the country is open for business again.

A recent poll by Bloomberg indicates a level of economic optimism that hasn’t been enjoyed since President Reagan. 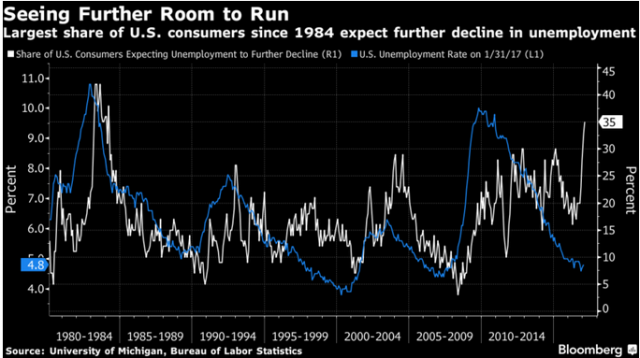 The largest share of Americans in decades believes the labor market still has room to grow. Thirty-five percent of U.S. consumers surveyed by the University of Michigan this month expect unemployment to further decline during the year ahead, the largest share of respondents since March 1984 — a time when unemployment was a full three percentage points higher than the current rate of 4.8 percent.

There appears only one sector that seems poised for job loss: The American press corps (or, should that be “corpse”?).

While I am optimistic, I am skeptical of both this “news” and the stock market’s meteoric rise since the election.

The economy doesn’t turn like a Lotus. When anyone says it is- they are stupid or lying.

Much of the optimism is logicial:

Banks will lend because of easing regulations.
Business will start taking action whereas before regulatory concerns halted that.
The NRLB has a leash.
Health care costs have probably peaked and will go down in a year or so.
etc.

However one month is NOT enough time for this to have measurable results on the economy and in a lot of ways, Trump is crowing about making the sun rise. (but hey, at least we have a President using the microphone for that instead of calling us all racists before hitting the golf course).

I do think America is headed back in the right direction and we should not give the “resist” idiots anything other than a time out and a comfort wubby.

I know for the company I work for (BIG BIG BIG) the earnings bonanza has been due to cutting costs. As an insider- IMO they have been shaving protein out of weight lifter’s diet and it will eventually catch up with them.

Skepticism is your friend. Embrace it. Use it.

There’s a website that tracks companies who are hiring: Daliy Job Fix

Obama had a pen and a phone, but only used it to harrass businesses through debilitating EOs and lefty appointments. Trump is doing the exact opposite. I would imaging that he would not have a lot of trouble getting the big unions on his side if they are going to produce more dues paying workers. What next, teachers?

Maybe you should say it the way Obama would: “American Press Corpse….”

How big of a hole do we need to bury the MvfM? I have an old entrenching tool, but if the hole is going to be very big I need to start digging because I’m old too.

The UnAffordable Care Act must be killed for any of this good news to hold. The GOPe makes me nervous.

Not to be a sourpuss, and recognizing we’re only a month in, those numbers are miniscule, and I’d wonder how many of those hirings were planned regardless of who won the election.

This is an article about hilldawg fan Warren Buffett you should read. It looks like he didn’t have much faith in hilldawg as he was a big seller before the election.

During an interview with Charlie Rose on Friday, Buffett said he added $12 billion worth of common stocks since the election, although he didn’t confirm any further details regarding what stocks he bought and why. He did say the purchases were mostly his decision.

Regulatory filings which detail Buffett’s activities won’t be released until next month.

Throughout all of 2015, he bought around $10 billion worth of stocks.